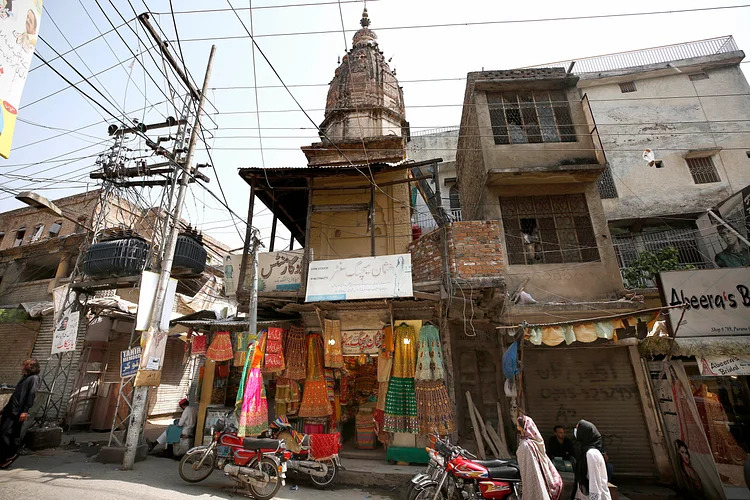 et again a over 100 year old Hindu temple has been attacked by Islamists in Pakistan. But this Hinduphobia and genocide of Hindu minorities in Pakistan does not raise international outrage nor does it demand an intervention by the United Nations as the perpetrator is an Islamic Republic and the victims are Hindus.

As reported by the Free Press Journal, the incident occurred at Purana Qila area of the city on Saturday, just a day before the Hindu festival of Holi, when 10 to 15 Islamists barged into the temple in the evening around 7.30 pm and damaged the main door, another door on the upper floor as well as the temple staircase, as recorded in a complaint made to police.

The security officer of the Evacuee Trust Property Board (ETPB), Northern Zone, Syed Raza Abbas Zaidi, is reported by the Dawn News to have lodged an FIR at Banni police station of Rawalpindi, saying that the construction and renovation work on the temple had been going on for the last one month.

As seen in India the temple lands were encroached by Land Jihad and on making several complaints, the authorities made an eyewash attempt to remove the encroachments. For a long time the land jihad mafia had constructed illegal shops and kiosks encroaching on the temple lands from all sides.

But the attack on Saturday, proves the lack of security provided to Hindu temples from extremist bigoted Islamist elements who consider holy temples as houses of devil.

Om Prakash the temple caretaker, as reported by The Express Tribune, said that after the attack on the temple, police has been deployed at his house as well as at the temple for security. However, no Holi celebrations were allowed at the temple and there are no regular poojas done at the temple as there is no idol at the temple. Such is the state of affairs of temples in Pakistan.

Last year end in Khyber Pakhtunkhwa Province area, the Krishna Dwar Mandir in Teri village at Karak district, was razed down and completely burnt by frenzied Islamist zealots led by Islamic clerics with the Pakistani administration being a mute spectator.

Pakistan’s record on persecution of minority Hindus and razing almost all the ancient temples is no secret, though the world likes to overlook the issue as Hindus are not considered by the majority Abrahamics in the world as people with human rights and fundamental right to profess and practice Hinduism.