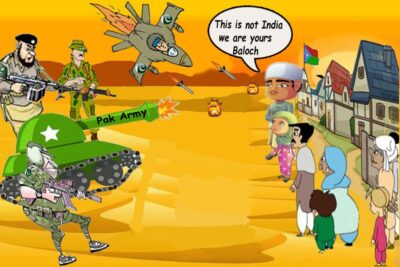 In Jan 2005 visitors were not welcome at the house in Karachi where Dr. Shazia Khalid was living, a police team posted at the gate and Pakistan Army rangers prowling the grounds inside. “You need the permission from the bosses at the top,” maintained a mustached officer firmly. “The very top.”

These were the days of Musharraf’s rule, emboldened by recent US Victory over Taliban. So reckoned Musharraf, the present golden boy in the region, Pakistan had decided to up the ante overall discontent in its national space.

Exploitation of the region backed by military

Relations between the military government and the elected representatives of the province had been tense for months, centered on grievances related to provincial sovereignty, the allocation of resources, interprovincial migrations, and the protection of local language and culture.

These claims were valid, however not new. The new was the disdain and exploitatively dismissive attitude of the then Pakistani establishment, fresh from the concluded Afghanistan War, elated over new found identity. Perhaps Musharraf thought the time ripe, to haul in all his eggs. The tension was, however, particularly intense in the Bugti area, due to its rich natural gas resources and the determination of Akbar Bugti, a prominent Bugti leader and a former interior minister of state and governor of Baluchistan, to get for his tribe a just share of the royalties generated by their exploitation.

Baluchistan has been simmering for decades, but temperatures had risen drastically while 103 people died and over 300 were wounded in violence since 2004. Things were brought abruptly to a boil in Gas fields of Sui after the Army sought to cover up the brutal gang rape of a woman doctor Dr Shazia Khalid, at the Sui Refinery in the night of 2 January, allegedly by a Pakistan Army Officer and personnel of the Army’s Defense Security Guards (DSG) who are charged with the protection of the gas installation.

The military establishment’s alleged effort to cover up the incident triggered a series of attacks against the DSG and the Frontier Constabulary, a paramilitary arm of Pakistan Army, by members of the Bugti tribe that hails from Baluchistan. The rape of Shazia Khalid provided the spark that started a blaze throughout the territory.

Pakistani powers that be, presented the conflict as the creation of greedy sardars, local tribal leaders fighting for a greater share of provincial resources and opposing development in order to preserve their own power, the outdated relic of a feudal system. Reality is that Pakistan’s military did not take Baluchi nationalist leaders seriously. They also discounted the risk of a long term struggle.

Narrative build was that the leader Bugti did not subscribe to development, and wanted to keep Baluch people medieval and repressed, using armed insurgency. The Pakistan government claimed at the time, that they had unearthed terrorist camps in Kohlu and were not only taking measures to stop the flow of weapons to these camps but were also contemplating action to eliminate them. In the Marri areas of Barkhan and Kohlu, there they complained of resistance to the operations of the oil and gas companies, which were working for the benefit of Punjab dominated Pakistan and its economy. Starting from the year 2000, the Baluchi nationalists have continued to target the gas infrastructure, to cause damage to the Pakistani economy and deny Pakistan the resources of Baluchistan, and also to keep their secessionist aspirations alive.

Radicalization of the Region

The only card Pakistan Army knows well to play

The engineering of political Islam or Islamic nationhood contributed to the partition of India on religious grounds and brought far-reaching consequences on various nations in south-central Asia who, although with different historical, lingual and cultural backgrounds, were merged together in the newly-created religious state of Pakistan.

Terror Islamization of Baluchistan and the lateral entry of sectarianism was part of the strategy to contain or dilute the Baluch national movement. Religious political parties were given patronage at the expense of the inherent culturally Baluchi representation.

Islamabad’s electoral manipulation had a larger strategic objective as well. With Radical Islamist parties in power in the two provinces adjacent to the Afghan border, it was easier for the military regime to provide the Afghan insurgency the sanctuaries it needed for the pursuit of a low-intensity conflict in Afghanistan while denying any responsibility in the process.

The Baluchi and Pashtun nationalist parties found themselves fundamentally affected. A Baluchi, Mohammad Jam Yusaf was appointed chief minister but had little control over even his own cabinet, which was dominated by Jamaat-Ulema-u-Islam, a conservative Islamist party. Lacking a voice in their own province, Baluchi nationalists rejected the military’s electoral, political, and constitutional manipulation. The rigging of the 2002 elections thus constituted the first step toward the conflict.

Determined to eradicate Baluchi nationalism, Musharraf accelerated the arrest of its leaders. A parliamentary committee including members of the Baluchi opposition convened to resolve matters; however, the intentions of Musharraf were not to be. Even when a compromise with Akbar Bugti seemed imminent, Musharraf deliberately opted for confrontation.

In addition, One of the core strategies of Musharraf was to upset the social harmony, of the Baluchi society by intimidation and murder of Baluchis, Hindus, Christians, and Shia Hazara of Quetta. The kidnapping for ransom, acts of extortion, and murder of Hindus started in the same year 2005.

Musharraf, to escalate the Baluchi issue and to convert from political to military dare, launched a devolution plan, that bypassed the provincial assemblies to create local governments entirely dependent on the central government for their survival. Although presented as a form of decentralization, all provinces except Punjab realised the scheme to be an imposition of a centralized form of government and a negation of provincial autonomy.

While the rape took place on the night of 1 January 2005, the matter came to light a week later after the Baluchistan Liberation Front (BLF) blew up a pipeline in Sui and exchanged fire with security personnel, as a manner of exhibit of outrage.

What ensued later was not to anyone’s belief. In retaliatory fire, security forces resorted to heavy firing and shelled civilians, killing many people, including women and children. Musharraf pumped in some 3,000 men, along with tanks and artillery, backed by helicopters and gunships. This evidently showed the intent; however no one took it so seriously, as the Baluch never wanted independence, but the worth of region’s natural resources, what was rightfully theirs.

According to Nawab Akbar Bugti, the sardar (chieftain) of the Bugti tribe that dominates the Sui region, “There are activities in the area which suggest that they intend only a war against us. For the last two days, there has been a full military build-up in the area. This is the words of a man wanting resolution of issues, not shedding blood, contrary to what Musharraf planned.

On 17th March 2005, Pakistan Army attacked Baluchistan’s Dera Bugti town with gunship helicopters, mortars, and rocket shells. Pakistan Army came up with an inhuman plan to use all available air and ground power, supposedly to eliminate prominent Baluch leader Nawab Akbar Khan Bugti, however, they were sending a message.

It was a message and a show of intent of what was to follow. Pogrom of own people, like the world had never seen, since mass killings and rapes in erstwhile East Pakistan, now Bangladesh.

Pakistan Army launched a massive military operation in Baluchistan, almost as if it were waging war against another country. Using fighter jets, helicopter gunships, long-range artillery and a force of around 25,000 troops, the focus of the operations was the Marri area, Kohlu and its surrounding areas including Dera Bugti. There were similar operations all over the province, including in the Noshki, Kalat and Makran regions. Scores of people were killed brazenly and dozens of villages destroyed.

The Pakistani military has so far, till date, proven unable to eliminate militant organizations and the larger nationalist movement, despite conducting targeted assassination campaigns and kidnappings and making various attempts to discredit the nationalist movement by associating it with organized crime or terrorist groups. Of course, every state opposes separatist tendencies, and Pakistan is no exception. But a close evaluation of so-called “Baluch nationalism” shows that although real separatist tendencies persisted in the province in the early 2000s, the political groups that actively promoted separatism were still a minority.

Independence, it is no longer a minority demand, however now an inherent to the Baluchi struggle.

Fifteen years thence, the resistance continues stronger than ever. Voice of Baluchis is now at the UN, and Pakistan Army’s abject human right records of extrajudicial killings, disappearances as state instrument of subversion is being scrutinized. The region, like Sind and Khyber Pakhtunkhwa, is still being manipulated using the instrument of “Radical Islamization” of the region, which is being actively resisted by the Baluchis.