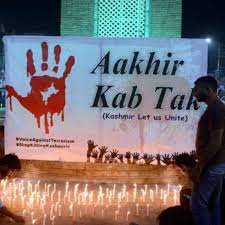 I was nine months old. It was January 19, 1990. There was no Twitter. Not even a single 24/7 private satellite news station. News often reached days later. Mosques in Kashmir that night on their loudspeakers chanted slogans asking Kashmiri Pandit men to vacate the Valley and leave behind their women. Islamists backed by Pakistan chanted Azaadi slogans on the streets of Kashmir. The system collapsed.

The chaos also led to the targeted assassination of prominent Kashmiri Pandits. From political leaders like Tika Lal Taploo to judge Neelkanth Ganjoo, from Doordarshan’s Lassa Kaul to scholar writer Sarwanand Kaul Premi. Jammu Kashmir Liberation Front (JKLF) prominently claimed responsibility for killing the majority of Pandits. Terrorists Yasin Malik and Bitta Karate among others were seen as the main villains of the Kashmiri Pandit exodus. JKLF even dared to kill four unarmed Indian Air Force personnel and abducted the daughter of then Home Minister of India Mufti Mohammad Sayeed. The terror crimes for which no JKLF terrorist has to date been convicted. Instead, Prime Ministers Atal Bihari Vajpayee and Manmohan Singh invited and hosted terrorist Yasin Malik on different occasions.

More than 400,000 Kashmiri Hindus were forced into an exodus since 1990. I was taken by my mother and grandparents on the morning of January 20, 1990, in a cab to Jammu, leaving behind our ancestral house in Rainawari, Srinagar, to never return.

Today three decades later, there is an eerie calm across Kashmir valley yet again. Harud or autumn has arrived in Kashmir. The crumbled Chinar leaves on the streets motionless. Srinagar in particular is in stony silence as if in mourning. The markets shut hours before the usual time. There is a sense of scare of the unknown. Lalchowk and its neighbouring posh markets are shut even before it is dark. The sweet shop owners and fruits sellers from the minority community are asked to return home early as a precautionary measure.

In less than three days, five civilians have been gunned down in the Kashmir valley, most of them from the minority communities. Islamist terrorists sheltered in Srinagar are killing soft targets to convey a message. The message is to destabilise India and its minorities in Kashmir. The targets are those who represent Indian democracy and unfurl the Tricolour proudly in Kashmir.

Sixty eight-year-old Makhan Lal Bindroo who never left the Valley even during the peak of terrorism was killed at his chemist shop at Iqbal Park, which is less than 500 metres away from the Srinagar SSP office. Bindroo who was respected by the locals always went out of the way to provide medicines to the needy. What was the crime of this man who only helped ailing Kashmiri Muslim population?

Bihari Golgappa street hawker Birender Paswan too was gunned down from behind by terrorists in the Lal Bazar area of Srinagar. It was the first day of his Navratri fast. In the morning he had spoken to his wife in Bhagalpur, Bihar, and told her about his upcoming visit home. He was waiting to meet his five-year-old daughter. That evening he was killed by a terrorist from behind while he was moving is cart. ISIS released an 18-second clipping of the killing a day later.

Supinder Kour and Deepak Chand were principal and teacher respectively at the government school in Eidgah area of Srinagar. On Thursday morning they were at the school like other teachers. It was like any other day when terrorists barged inside the school compound and paraded the teachers. The teachers were asked to show their identification cards and mobile phones. After brief interrogation, all Muslims teachers were allowed to leave. Deepak Chand was taken out. As the terrorists loaded their rifles to pump bullets into Deepak Chand, Supinder jumped to save Chand and protested the decision of the terrorists, asking them to fear almighty. Terrorists pumped bullets into both and managed to flee.

Supinder Kour was a humanitarian who was helping an orphan Kashmiri Muslim girl get education and paying for her expenses. Kour was also helping with the medical expenses of a Kashmiri Muslim security guard of the school where she was the principal. What was her crime to be killed mercilessly outside her school building?

Today my heart breaks as I hear about the fresh exodus in 2021. Several Hindu families have left Srinagar and Anantnag in fear after recent brutal killings. Some packing their bags in tears. I am numb.

A young Jammu and Kashmir policeman from the Kashmiri Pandit community deployed in Jammu right now tells me that his family members who stay in their ancestral home in Baramulla of North Kashmir are leaving on Friday morning for Jammu. This young man wanted to be a singer, yet a difficult life in exile made him a cop.

A well-known Kashmiri Pandit business family left Srinagar on Thursday. They didn’t leave in the last 32 years. Their grandson called me from abroad, requesting if I can speak to his grandfather who was the only one unwilling to leave even now. The grandfather too would have left Kashmir by the time this piece is published.

In a two-minute audio I received from Sheikhpora, Budgam, Kashmir, an elderly lady says she has packed her bags to leave before dawn tomorrow. She says that 15 families have already left the area. Many from Vessu and Ganderbal are leaving as well. In the brief conversation with her relative from Jammu, she says her daughter-in-law is her responsibility, it was because of her government job that she was forced to move to the Valley.

Jammu and Kashmir government notices that I have accessed from Kashmir indicate that many Kashmiri Pandit government employees in central and south Kashmir have sought immediate police protection. I am told the government is providing security but they remain soft targets. The government notice copies are already viral on WhatsApp in Kashmir, putting their life at risk.

Earlier in July, I spent 26 days in Srinagar and adjoining districts with Kashmiri Hindu families. Many spoke about threats, temple land grabbing and targeted attacks on Hindus. Not just Hindu community but temple priests in Srinagar also fear for their life after facing regular threats. Jammu and Kashmir Police as a precautionary measure reached out to few Hindu localities/businessmen in Srinagar and assured safety. It’s important to deploy security for Hindu localities across the Valley. If money could be wasted for security of radical separatists for years, why not give security to patriot Hindus and Sikhs?

The Silence Is Appalling

Kashmiri Pandit Sangarsh Samiti, a body of Pandits which chose to stay in the Valley since the last three decades, in a stinging letter to the Lt Governor Manoj Sinha said, “From last more than ten days there is an input that the businessmen and prominent faces from Non-Migrant Kashmiri Pandits/Hindus living in Kashmir Valley will be eliminated from Kashmir Valley and concerned agencies are in deep slumber and reason to which one more killing of the leading businessman was executed.”

“On one hand our requests for appointment to discuss these issues are put in the dustbin and on the other hand, your Excellency’s office and the security agencies fail to protect the life and property of the minorities living in Kashmir Valley clearly shows collapse and lack of coordination on part of the administration,” the letter further says.

Kashmiri Pandits today are sitting ducks in the Valley. Even 32 years after their brutal exodus and ethnic cleansing, the government has failed to ensure their security. How will Lt Governor Manoj Sinha ensure rehabilitation of Pandits when the remaining Hindus and Sikhs in the Valley don’t feel secure anymore?

The silence of the Kashmiri society over the terror killings is appalling. Rahul Pandita, Kashmiri Pandit author of “Our Moon Has Blood Clots”, tells me that the “collective silence is baffling but not at all surprising. You can have golgappa anywhere in India including Pandara Road in New Delhi, but if a Bihari comes to sell golgappas in Kashmir he becomes an outsider”.

Kashmiri Pandits today wish to tell you that tomorrow they might be killed along with their families. The 2021 autumn in Naya Kashmir has brought 1990 winter chill for Hindus and Sikhs. Please don’t let another exodus happen under your watch, Mr Prime Minister.