A Dark Chapter Of Kashmir’s History: The Day When Pakistan Plundered The ‘Paradise On Earth’ 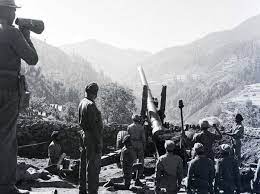 Background Of Invasion in Kashmir

As the British decided to exit India, Maharaja Hari Singh of Kashmir, aspiring to keep the Jammu and Kashmir as an independent territory, did not accede to either of the newly formed nations. Pakistan laid claim on Kashmir since it is a Muslim majority region.

It ignored the fact that the criterion of division along religious majority applied only to the regions directly colonized by the British and not to princely states like J&K.

The Indian troops, on the other hand, set foot in Kashmir to counter the perpetrators of violence on Kashmir only after the Maharaja signed the Instrument of Accession on October 26 ,1947.

Kashmir is a very strong symbol for both India and Pakistan, even if their views on the state differ ideologically. While India considers Kashmir essential for its secular identity, for Pakistan, its acquisition is necessary to complete the division of India on a religious basis. For Pakistan, the merger of Kashmir remains an unfinished agenda of partition.

Without including Muslim majority J&K, in its core, Pakistan considers itself incomplete as a nation, which may fail or even collapse. Apart from religion Pakistan also quotes ethnicity, geography, and legality for Kashmir to be its part.

This lofty romanticism about Kashmir’s cause and solidarity with their Muslim brethren of J&K is nothing but a smokescreen to grab Kashmir for economic and military reasons. Pakistani historian Ishtiaq Ahmed has called it a “hydro-political problem” of Pakistan.

As is the case elsewhere, Pakistan views the merger of Kashmir through the narrow prism of the prosperity of western (Pakistani) Punjab. Pakistani writings have highlighted the need for having Kashmir, not so much for honoring the wishes and safety of the Kashmiris but for getting strategic depth to Pakistani Punjab and also for ensuring non-interference with river waters coming from Kashmir.

Maj. Gen. Akbar Khan, who was part of the Kashmir Liberation Committee and the self-proclaimed commander-in-chief in Kashmir in 1947-48, brings out the military and economic importance of Kashmir to Pakistan in his book Raiders in Kashmir — “Our own safety and welfare (read Western Punjab) demand that the state (Kashmir) should not go over to India. If Indian troops came to be stationed along Kashmir’s western border (with Pakistani Punjab), she (India) could establish its forces within a few miles of the 180-miles-long vital road and rail route between Lahore and Pindi (the entire stretch he speaks is in West Punjab).

“From an economic point of view, the position was equally clear. Our agricultural economy (again in Punjab) was dependent particularly upon the rivers coming out of Kashmir.”

Prior to dwelling further into the unscrupulous attempt of wresting Kashmir as it unfolded during October 1947, it would be worth recalling the social fabric as it existed in Kashmir of those days. In her book Between the Great Divide, Pakistani author Anam Zakaria has given innumerable examples of traditionally secular and tolerant practices of Kashmiris, both Muslims and Hindus. “The degree of homogeneity was such that many Hindus and Muslims went to the extent of only consuming halal mutton instead of beef or pork to respect each other’s traditions and sensibilities.”

Such inter-communal harmony is also documented in the book, Wounded Memories by Muhammad Saeed Asad, an author who hails from Mirpur in POK. He says that it was important for the residents of Kashmir to be Kashmiri rather than Muslim, Hindu or Sikh. “The Sikhs and Hindus were familiar with and able to recite the verses of the Holy Quran just as much as Muslims could read Holy Granth.”

Within days of coming into being, Pakistan formed a ‘Kashmir Liberation Committee’ led by Prime Minister Liaqat Ali Khan with Colonel (later Maj Gen) Akbar Khan as the military member. This committee decided to launch a tribal aggression into Kashmir to force a dithering and militarily weak maharaja into joining Pakistan.

The objective of the dubious plan was to arouse communal passions, assassinate important leaders and capture power in Kashmir. The prevalent impression from a few incidents in Jammu and Poonch is that Muslims of the state had risen against the Government and wished to join Pakistan. Nothing could be farther from the truth.

There is enough evidence to suggest that the Kashmir operation was not a spontaneous uprising by the tribesmen but a clandestine operation deliberately designed by Pakistan for the annexation of the state by force. Prem Shanker Jha in his book Kashmir, 1947, Rival Version of History states that the raiders were to be the real spearhead of the Pakistan Government’s annexation plan.

According to him, “The instigation of insurrectionary activity and communal mayhem in Poonch and Jammu was a diversionary tactic designed to disperse and pin down the state forces and prevent them from regrouping at the mouth of Uri gorge which raiders had to pass before entering the Kashmir Valley.”

The uprising, according to the Pakistani conspirators, would be passed off as an act undertaken by irregulars on their own, and that these lawless tribesmen could not be controlled by the newly established Pakistani state. However, there are enough pieces of evidence to prove that the irregulars were extensively supported by Pakistan’s provincial and federal governments.

Was it Holy War?

Pakistan has spread a narrative that the tribesmen were incited to a ‘holy war’ by the stories of atrocities which fleeing Muslims brought with them to the marketplace of Peshawar. But waging a ‘holy war’ was never on the agenda of these primitive tribesmen. They were lured with a promise of Zar (wealth), Sar (head), and Zan (women) of the innocent Kashmiris irrespective of his religion, gender, or position, they did not differentiate between Hindus, Muslims, or Sikhs.

Anyone, who stopped these savages from indulging in plunder or pursuing their carnal pleasures was subjected to unseen and unheard-of violence. These tribal raids significantly altered the very fabric of the tolerant Valley.

Notwithstanding Pakistan’s continuous denial of any involvement in tribesmen’s invasion into Kashmir, there are substantial pieces of evidence to prove Pakistan’s wholehearted assistance. The details are as follows:

The leading Maliks (leaders) of the tribes who participated in the raid were secretly interviewed in Rawalpindi as early as October 2 and tasked to organize Lashkars. These Maliks were rewarded handsomely.

There was a serious shortage of arms and ammunition as most of it still lay in India. As Director of Weapon and Equipment at GHQ, Colonel Akbar Khan knew that available weapons meant for the Pakistan Army could not be used without the permission of  Commander-in-Chief General Messervy. Akbar Khan, however, managed to locate 4000 rifles which were to be handed over to the Punjab Police. A large stock of old ammunition was also discovered, which was to be transported to Karachi and disposed of at sea, as it had gone beyond its expiry date and therefore, was deemed too dangerous to be used. These arms and ammunition were diverted to the band of irregulars.

Petrol, (which was a scarce commodity in those days), food, and camp administrative services were organized and provisioned by the Pak Army to the raiders.

A secret “Kashmir Fund” was set aside by Nawab of Mamdot, the Chief Minister of West Punjab.

The Chief Minister of the Frontier Province, Abdul Qayyum Khan, who hailed from Poonch in Kashmir, gave his blessings and unqualified assistance including provisioning of 300-400 buses and lorries, without which the operation might not have been

According to George Cunningham, “Jinnah himself heard of it (the plan) but said ‘Don’t tell me anything of it. My conscience must remain clear’’.

VP Menon, who was the right-hand man of Sardar Patel, India’s first Deputy Prime Minister, said in his book Integration of Indian States that “the raiders had free transit through Pakistan. They were in possession of modern military equipment which could only have been obtained from Pakistani Army sources; mortars, artillery, and Mark V mines are not the kind of armament which tribesmen possess”.

A large number of Army officers had joined the tribesmen and organized the attacks on the state and Indian Army. The professionalism displayed could not be expected of any untrained personnel.

If Raids Had Not Happened

It is worth pondering over the scenario in case the invasion by the raiders had not taken place. The possibility of Maharaja joining Pakistan existed. Then-Indian Home Minister Sardar Patel had left the choice to the Maharaja. Lord Mountbatten too advised the Maharaja to join one of the two dominions, as two bigger nations in its neighborhood would not let it remain independent. VP Menon wrote:

“We had no territorial ambitions in Kashmir. If the invasion had not happened, I can say in the face of any contradiction that the Government of India would have left Kashmir alone’. Lord Mountbatten on his return to England publicly stated that he had, on the authority of the Government of India, informed the Maharaja that he was perfectly free to accede to Pakistan if he chooses to do so.”

The slaughter of innocent women and children belonging to all faiths by the invaders probably lost Pakistan any faint communal co-operation they might have expected in the Valley of Kashmir.

Pakistan was in a hurry to grab Kashmir. Its leaders got impatient and apprehensive that the Maharaja may not be inclined to join them. In order to present a fait accompli to the Maharaja, Pakistan unleashed unruly and undisciplined tribesmen on innocent Kashmiris who had never heard or seen such savagery in their lives.

Lord Cunningham, the Governor of NWFP, noted “because of the excesses of the tribesmen, many Muslims of Kashmir would have adhered to India and not to Pakistan, if a plebiscite had been held.