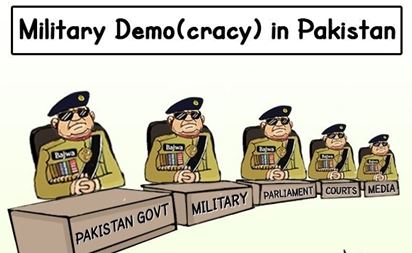 It seems that Prime Minister Imran Khan’s bid to unveil a ‘Naya’ [new] Pakistan hasn’t impressed opposition political parties. This is why 11 opposition political parties in Pakistan announced the creation of an alliance called Pakistan Democratic Movement [PDM] last month to oust the Pakistan Tehreek-e-Insaaf [PTI] government. But not many took the PDM seriously because Khan had already announced that his government not only enjoyed “excellent” and “most harmonious” relations with Rawalpindi, but also that the two “work together [and] the military completely stands by all the democratic government’s policies.”

Those who know Pakistan will agree that there couldn’t have been a more forceful way to convey the message that Khan’s position was unassailable!

It’s quite possible that it was his inflated ego and survival instinct that spurred the PTI chief to cite the army’s backing rather than his popularity as raison d’être of his political ‘invincibility’. Similarly, Pakistan army chief Gen Qamar Javed Bajwa in his address during the passing out parade of cadets at Pakistan Military Academy Kakul on October 10, mentioning that “We continue to support the Government, when ever asked to, as per the law and guidelines of the constitution,” may have been mere reiteration of the well-known and universal fact that besides defending the nation’s borders, armies are also required to assist the government during major calamities and in maintenance of law and order.

However, many analysts opine that this seemingly irrelevant and out of context statement being made by the army chief at the ‘cradle’ of Pakistan’s military leadership has a subtle significance as it endorses Khan’s claim of the army and government in Pakistan being “on the same page.” But rather that have a positive impact, Khan’s ‘boast’ of enjoying the military’s support and Gen Bajwa’s ‘academic’ revelation on the army supporting the government has only further fuelled speculation of a possible quid pro quo.

But by his incessant declarations about having the army’s support, Khan has unwittingly vindicated former Prime Minister Nawaz Sharif’s public assertion that Pakistan army chief “Gen Qamar Javed Bajwa ended my government. He rigged 2018 elections and imposed incapable Imran Khan on the nation [sic].” Similarly, Gen Bajwa’s out of place statement on the army’s support to the government is seen as a ‘return-gift’ to Khan for extending the army chief’s tenure by three years by invoking legislation to overcome its legal illegitimacy and widespread objections from opposition parties.

When it comes to the issue of wielding power and authority in Pakistan, the military has indisputably always been ‘numero uno’. So, even though Rawalpindi has always been playing ‘king-maker’ and installing pliable Prime Ministers who would readily accept the military’s supremacy, but still there were instances of run-ins between the two. Those who riled the army by trying to be assertive and earned Rawalpindi’s wrath and lost their jobs includes Prime Ministers Zulfikar Ali Bhutto, his daughter Benazir Bhutto Zardari, and more recently, Nawaz Sharif.

Though the army has regularly been exceeding its brief by manipulating the country’s institutions, it has never been so brash in its dealing before. Today, we find a high court judge accusing ISI of getting “benches formed at their will,” a peaceful crusade for securing rights of ethnic minorities like the Pashtun Tahafuz Movement [PTM] being publicly threatened by being told that  that “their time is up” and idioms like “all’s fair in love and war” and “war is very ruthless” being used to trivialise the rather solemn issue of enforced disappearances in Balochistan and elsewhere.

Today, even journalists are not safe in Pakistan anymore as is evident from the recent abduction of senior Pakistani journalist Matiullah Jan. A vocal critic of the military establishment, Jan was abducted in broad daylight in Islamabad in July by a group of men and in the CCTV footage that captured this incident, some of the kidnappers were seen wearing black police tee-shirts. However, the police outrightly denied that its personnel were involved and this claim is logical because of three reasons.

One, if it wanted to arrest the scribe, then the police could easily have got a warrant for this purpose. Two, if the police wanted to abduct Jan, then why not pick him up from his home in the dead of the night instead of doing so in broad daylight- and that too from in front of a school which was functioning at that time? Lastly, where does one find the kidnappers flashing their identity by wearing uniforms of the organisation they belong to?

It may not have been officially declared, but even a child in Islamabad knows that Jan’s kidnapping was the handiwork of ISI.

The claim made by PDM leaders during a press conference that that Sindh’s Inspector General of Police [IGP] Mushtaq Ahmed Mahar had been kidnapped by Rangers and forced to order arrest of PML-N leader Capt [Retired] Safdar, is a very serious one. Whereas this allegation may seem farfetched, but with Gen Bajwa ordering an enquiry into this incident, it’s absolutely clear that IGP Sindh Province was indeed ‘abducted’ and the orders for this illegal action came from some military authority because though a paramilitary force, the Rangers are commanded by army officers.

Over the years, people in Pakistan may have got used to the highhandedness of the army, but it seems that for the Sindh Police, the ‘abduction’ of an IGP rank officer and coercing him to sign an arrest warrant has proved to be the proverbial straw that broke the camel’s back. That’s why it’s not at all surprising that more than 15 police officers of various ranks ranging from Station House Officers to Additional Inspector Generals have submitted identical leave applications to “protest the humiliation meted out to Sindh police” and terming this decision “a spontaneous and heartfelt reaction made on an individual rather than collective basis.”

Policing is a thankless job and as such police men all over the world develop a remarkable degree of resilience and aren’t easily provoked. So, even though Sindh police has termed the decision of its officers to proceed on mass leave a “spontaneous” but individual reaction “because every single member of the department felt an acute sense of disrespect,” the reality is quite different. Under the present dispensation, just like all other state institutions, the police too are being continuously embarrassed by the army’s self-serving upmanship drive to project itself as the country’s sole patriots and as such, ‘abduction’ of IGP Sindh has only served as the tipping point.

With the influence that the army wields in Pakistan and its innate ability to make offers that can’t be refused, it’s obvious that the Sindh police crisis will blow over very soon. But this is no consolation since this incident confirms the existence of ‘Bajwa-Khan nexus’ in which Rawalpindi is acting as Islamabad’s ‘capo’ that is willingly arm-twisting ‘uncooperative’ police officers into issuing arrest warrants against Khan’s political enemies. So, the high court judge’s complaint about the army’s interference in the judiciary may well be true!

So, it’s time that the discerning people of Pakistan took a more realistic view of the prevailing situation and instead of tilting windmills or worrying about non-existent external threats, unite to identify and fight the enemies of democracy within!