Abrogation of Article 370 : A Year of Disappointment for Pakistan 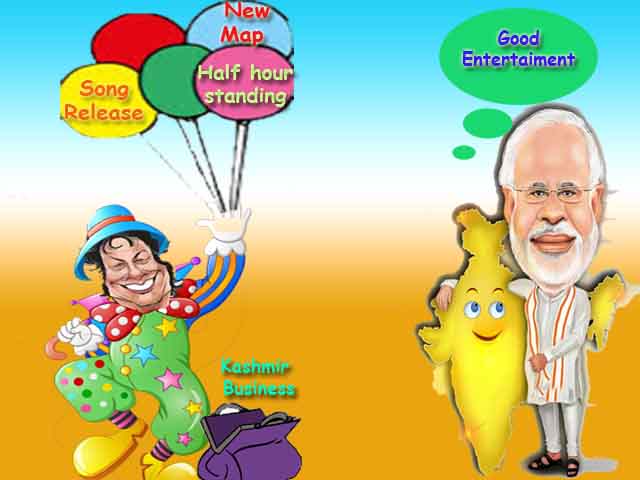 A failed ‘Yaum-e-Istehsal’, just like the failed half-hour standing show

Pakistan’s policy of” “bleed India with a thousand cuts” seems to have taken a different shape. Unless they meant “confuse India with a thousand useless ideas” in which case it seems to be working just fine. From half-hour Friday standings to revealing a new map recently, Pakistan sure seems like a confused child trying really hard to find new ways to grab some attention of the elders(read World Leaders)

Pakistan Prime Minister Imran Khan also announced that he would travel the world as “Kashmir ka Safir (Kashmir’s ambassador) and promised to “forcefully present Kashmir issue like never before” at the UNGA annual meet in September. Unfortunately, while Islamabad’s attempt to seek intervention of UNSC in this matter failed, its much-publicised plan to take up this issue to ICJ didn’t even take off.

A year after India revoked the special status to Jammu and Kashmir, and the ruling establishment in Pakistan said ‘Kashmir Banega Pakistan’, that slogan now seems like a never-ending struggle for them. Pakistan is at it again. Crying for Kashmir has been their favorite time pass and they seem to be making it an entertaining affair with loads of activities for the participants to do. From addressing various gatherings to organizing rallies, from laying the foundation stone of a monument to the martyrs of the Kashmir freedom movement to meetings with the All Parties Hurriyat Conference (APHC), Imran Khan did all he could within the small radius of his power to make a difference. Or at least he thought it would make a difference.

Also, the latest technique of challenging someone is not to threaten them with war, just release a song about it. Meet the Pakistan Army. I’m sure the Pakistan military’s PR wing had its hands full a week before the anniversary of Abrogation of Article 370 with planning all the fake campaigns they had lined up but they sure had time enough for a proud production – Ja chod de meri wadi —a song that is as dead as Imran Khan’s promises. While Islamabad may have observed August 5 as ‘Yaum-e-Istehsal’ for Kashmir with a special song for this occasion prepared by Inter-Services Public Relations, far from restoring Article 370, New Delhi is looking forward to holding the next round of elections in J&K. Since they know they have to carry on with the drama for some more time, they thought why not make a song out of it. This way the people standing in solidarity with this failed cause will not get bored.

He even went ahead and issued a new Political map of Pakistan as a special token for the people of Kashmir. Not realizing that the so-called new political map released by PM Imran Khan sounds a death knell to the self-determination movement among separatists in Kashmir Valley as Islamabad has now co-opted Jammu and Kashmir. This is not a welcome step for the Kashmiris as it leaves no space for either plebiscite or independent Kashmir.

It is quite evident that Pakistan has followed Nepal. Kathmandu had issued a map to emphasize its illegal claims on Lipulekh, Limiyadhura, and Kalapani in India’s Uttarakhand on 21 May 2020. It is not mere coincidence that both Pakistan and Nepal are close allies of Beijing with the latter pumping in money in form of infrastructure aid to prop up both regimes. The timing and the manner were both just too conspicuous Mr. Khan!!

Come to think of it, if Pakistan still considers Kashmir as a disputed territory (which means there is no change in its stand), then why did it need a new map? And if maps could solve territorial disputes, why do you need military? And if there’s no need for military, why the extravagant spending on Military budget every year? Interestingly, Pakistan has not only kept Shaksgam Valley and Aksai Chin out of its cartographic expansion but also left this frontier undefined to let China draw their own line on the map. Quite convenient!!

Well, at least Foreign minister Shah Mahmood Qureshi had a better idea. He thought one minute of silence should be enough to rattle India. I bet it was more than enough, considering how successful the 30-minute Friday standing from last year was after India revoked special status to Jammu and Kashmir. The mandatory VVIP LoC outings are always a treat. There is nothing new to offer and no one expects newness from them.

And then of course there are always the twitter warriors-those youths recruited to spread propaganda against India on social media. At least they never let ISPR down and when given a narrative, they are ready to go crazy on Twitter at the given time at the given place with the exact same tweets pouring in from all directions. Way to go ISPR!! Well, why not, after all the ISPR has told these youths that they are fighting a narrative warfare with India and they are as important as soldiers.

Ever since Article 370 has been abrogated, all Islamabad has been able to do is feed Kashmiris with hollow promises. While Prime Minister Khan announced ‘Kashmir Solidarity Day’ to be observed on a weekly basis, Pakistan Army chief General Qamar Bajwa promised that the army is prepared to go “to any extent” for the sake of Kashmiris. Unfortunately, while observing Kashmir solidarity day every week was a waste of time for their schools and offices, Gen Bajwa’s assurance remains unfulfilled. And then just a few days before the first anniversary of the abrogation of Articles 370 and 35A, Pakistan came up with such lengthy plans and ‘presented’ the world with yet another catch-phrase of ‘Yaum-e-Istehsal’ (Day of Exploitation). However, by doing so hasn’t Islamabad indirectly accepted that despite its ill-planned efforts on Kashmir, it hasn’t been able to do anything to reverse abrogation of Articles 370 and 35A by India?

So if anyone, anywhere had doubts on Pakistan’s commitment on Kashmir, beware, cause you never know what’s next on the agenda to entertain, err I mean, scare you!!