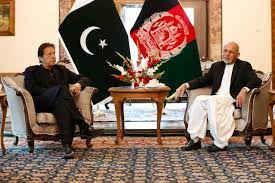 As Taliban captured half of Afghanistan and continues to expand its territory and Afghan President accused Pakistan of helping and assisting Taliban alleging that Ten Thousand jihadi fighters have recently entered Afghanistan from Pakistan sanctuaries , Pakistan reopened its south-western border with Afghanistan which is already under Taliban control and Pakistan Prime Minister stated that ‘Taliban are normal civilians’, they are ‘not military outfit’ and ‘the US really messed it up in Afghanistan’. Earlier Pakistan refused permission to the US to establish military bases on its soil for anti-terrorism operations in Afghanistan post its military exit from the country. On Pakistan-US future relations, Prime Minister asserted that ‘we want to be partners in peace, but not in conflict’. So, Pakistan partnered with the US for ‘peace making’ in Afghanistan for last so many years! This may appear a U-turn in Pakistan policy but it instead draws a straight line of strategy for the path Pakistan may take forward. An Afghan-exiting US would not be a sustainable partner. It can encash Afghanistan somewhere else now.

It is not a coincidence that these statements from Pakistan Prime Minister have come while a high-level Taliban delegation was visiting China, the Pakistan National Security Advisor was visiting the US and the US Secretary of State was visiting India.

The Chinese Foreign Minister Wang Yi during his meeting with the Head of Afghan Taliban Political Commission Mullah Abdul Ghani Baradar in Tianjin expressed hope that Afghan Taliban will ‘play a positive role and create enabling conditions for security, stability, development and cooperation in the region’. Wang Hi felt the Taliban was an important ‘military and political force in Afghanistan’ which would ‘build a positive image and pursue an inclusive policy’.

Pakistan National Security Advisor Moeed Yusuf was visiting the US and discussing issues with his US counterpart Jake Sullivan most importantly the US concern of ‘urgent need for reduction in violence and a negotiated political settlement to the conflict’.

Antony Blinken, in New Delhi, said Afghanistan would become a ‘pariah State’ if Taliban takes over and commits atrocities against its own population. He asserted that atrocities committed by Taliban in the areas that it has taken over are ‘deeply troubling and do not certainly speak well of the Taliban’s intensions for the country as a whole’.

In fact, both China and Pakistan are worried about security concerns at in their own respective countries as Taliban spreads their wings to cover whole of Afghanistan and would likely to take over sooner than later.

China is worried about growing clout of East Turkestan Islamic Movement (ETIM), the Uyghur extremist organization active in Western China struggling to establish an independent state to be named as ‘East Turkestan’ replacing Xinjiang in China. ETIM is said to be having patronage and support of Al-Qaeda and Taliban. China took the assurance of visiting Taliban delegation that the Afghan soil would not be allowed to be used for any activity against China.

Pakistan is very well trapped in dilemma having nurtured and supported Taliban from conceiving the idea to its birth to its growth to its capturing and ruling Afghanistan in nineties. Now the Taliban has outgrown even the Pak support and does not, at times, hesitate to see eye to eye with it. Pakistan could bring Taliban to negotiating table with the US to arrive at the Feb 2020 deal, primarily because Taliban always wanted the US to vacate Afghan soil. But after that even Pakistan is failing to bring Taliban to table with Afghan establishment to reach a political settlement. Taliban believes that it could just conquer and snatch Afghanistan from the current establishment. The US, however, would go on pressing Pakistan to Bring Taliban to the table.

Pakistan, which so far enjoyed it clout with Taliban, is sandwiched between the pressure from the US and arrogance and ignorance from Taliban.

But Pakistan is not only bearing pressure from the US, it apprehends the worst of fear of facing revolts back home as well. Pakistan has its own version of Taliban (Tehrik-i-Taliban), coordinating many extremist militant groups working along Pak-Afghan border. This outfit is active with the aim of overthrowing Pakistan state by violent terrorist means. The outfit has the ideological patronage from al-Qaeda as well.

Jais-i-Mohammad (JeM) and Laskar-e-Tayyiba (LeT) are also said to be fighting side by side Taliban in Afghanistan. A take over by Taliban in Afghanistan which has long been cherished by Pakistan establishment would prove to be a double-edged sword for Pakistan and it has the full and fertile potential to backfire against Pakistan, An Afghan-ruling Taliban would have the inherent guts to fuel enough disturbances at the Pak soil and, therefore, would not refrain from arm-twisting it for any of its whims. Therefore, while the world would perceive Pakistan to be comfortable with Taliban establishment in Afghanistan, it would feel alone and always at pains handling it.

One of the recent United Nations’ reports reveals that there are more than a dozen militant organizations are active along both the sides of Afghan-Pak over two thousand six hundred kms of the border, wherein thousands of Pakistani nationals are involved. With growing heat and intensified Taliban conflict with the Afghan establishment, Pakistan would most likely find itself deeply involved into it.

With the growing fight between Afghan troops and Taliban, the accusation of Pakistan too is intensifying from the Afghan establishment. There are continuous allegations of ‘foreign terrorists’ joining Taliban especially in the northern regions of the country. Pakistan is facing continuous accusations from various quarters other than Afghanistan as well. The overall international mood, in the face of violence and atrocities going on in the country, is of conciliation, reproachment and political understanding between Afghan establishment and Taliban. Pakistan is obviously been called upon by all concerned to facilitate the talks.

Pakistan appears to be in serious dilemma at present quite unable to take a firm view either on its domestic or foreign policy. The anti-India policy being the sole basis of all its policies is now showing not only its futility but also putting Pakistan in enormous stress. In a very strange and peculiar move the Pak army called a structured meet of politicians to brief them of the situation prevailing consequent upon the US withdrawal. Never before Pak army has briefed politicians and try taking them on board. This only show the gravity of the circumstances Pakistan has been cornered to.

It has been for long the wishful thinking of Pakistan to see Taliban at the helm again in Afghanistan. As it is nearing to happen Pakistan will have to begin regretting its policies so far.

Playing a double game of supporting Taliban and also trying keep the US in good humor would not have been a policy to last for ever in any case. Suffering from anti-India obsession was certainly going to have its own fall out, for no country can ever continue to build a fortune forever on the pillars of hate for others. At the end of the game, like humans, countries too have to reap whatever it sows