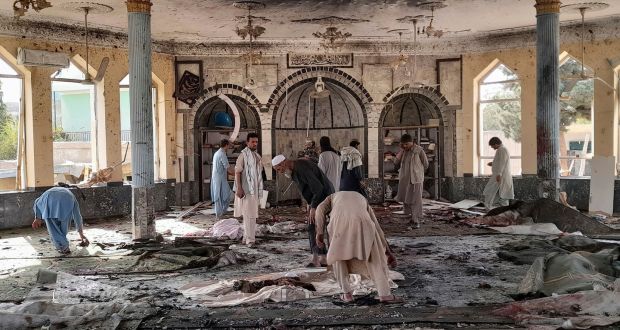 Dozens of people have been killed in a suicide bombing at a Shia mosque in Afghanistan’s northeastern city of Kunduz during Friday prayers, the country’s worst attack since the Taliban took over control in August.

The Islamic State in Khorasan Province, ISKP (ISIS-K) claimed responsibility for the attack through its Telegram channels on Friday.

In a statement released on Telegram, the group said an ISIS-K suicide bomber “detonated an explosive vest amid a crowd” of Shia worshippers who had gathered inside the mosque.

Video footage showed bodies surrounded by debris inside the Gozar-e-Sayed Abad Mosque that is used by people from the minority Shia Muslim community.

There have been conflicting reports about the number of casualties. The United Nations mission to Afghanistan said in a tweet the blast killed and wounded more than 100 people.

Dost Mohammad Obaida, the deputy police chief for Kunduz province, also said at least 100 people were killed or wounded in the attack, adding that the “majority of them have been killed”.

“I assure our Shia brothers that the Taliban are prepared to ensure their safety,” Obaida said, adding that an investigation was under way.

Meanwhile, the state-run Bakhtar News Agency said at least 46 people were killed, while more than 140 were wounded inside the mosque in the Khan Abad area of Kunduz city.

“They were struggling to deal with the human remains scattered throughout the back yard of the mosque,” Ahelbarra said.

“They expect the death toll to further climb in further hours because they say many people who were injured are in critical condition.”