Afghanistan: From here to where? 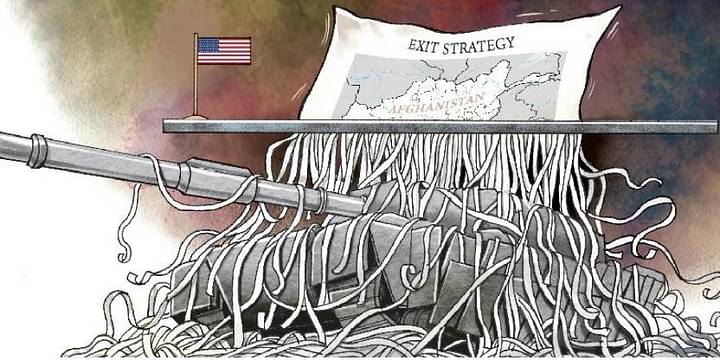 Joe Biden may keep justifying his actions of pulling out US troops from Afghanistan without a ceasefire and without any agreement worth the name. However, the military incompetence displayed by the Americans will go down in history as one of the greatest capitulations. The Afghan National Security Forces (ANSF) proved to be incompetent, demotivated and poorly led. Yet what one should question is the competence of the US military commanders on whose assessment was based the idea that they would fight last man last round. When you invest $88 billion in a field force, surely one does step in to also check on the competence of the organisation you have created. We in India may be partially guilty too. There is of course the other version, that the ANSF had put up a spirited fight for the last many years, losing on average as many as 8,000 soldiers per year; that it crumbled in the face of the last stand was largely due to subterfuge, the agreements that probably were negotiated without US knowledge by ANSF commanders. Either way it’s the intelligence that proved completely faulty and that too at the operational and tactical level where the ear to the ground should have been far sharper. There are enough versions in the air about a secret deal the US negotiated with the Taliban. These appear completely implausible simply because no US leader in his senses would ever wish to leave behind an arsenal of weapons and ammunition that was bound to fall in the hands of radical elements. To imagine that trust had been built in the last few months to play out a subterfuge against adversaries such as China and Russia is to believe the impossible. The entire Taliban drama has been the result of a poorly thought-through exit strategy and leaves the US red in the face as regards its reputation for future conflicts in partnership.

There are several domains in the developing story of Afghanistan that should worry us. It is unlikely that stability in Kabul is anywhere on the cards. The sham image of change and moderate attitude the Taliban wish to cultivate has not succeeded. If the Taliban wished to sell that image, they should have commenced their public relations much earlier. If they act brutally with the people in the implementation of Sharia Law and abrogate other human rights practices, the people may just not be willing to accept it. Afghan youth may not be so easily subdued after years of relative freedom. That in turn will get international institutions and holders of purse strings to turn off any possible assistance to run the state. Sanctions could be brought in support for resistance movements that are beginning to take shape. We cannot legislate for the attitude of rural Afghanistan but it is likely that the influence of relative freedom of the urban areas has travelled there too. Atrocities on the people will probably result in more resistance. The Panjsher movement provides a spark of hope for many in Afghanistan.

The next big concern relates to the environment of chaos existing at the moment. A nation without a government and rogue elements ruling the streets are a recipe for the entry of extraneous elements involved in transnational crime and terror. This is exactly what happened in Iraq and Syria with the rise of ISIS when the US took its eyes off the scanner in 2011. Most terrorist groups may not exist in physical form but are virtually networked. The region offers tremendous scope for the spread of ideological wars of a hybrid variety. Finances are not a problem due to the illegal narcotics trade and now weapons are available dime a dozen, many of which will probably be sold for profit, creating one of the biggest arms markets in existence. The American goal of ensuring that Afghan territory should never be used for terrorist targeting of the US mainland again, a rather simplistic aim, can hardly be seen to be achieved if well-known terror groups such as Al Qaeda-Core, Islamic State (Khorasan Province), East Turkestan Islamic Movement, Tehreek e Taliban-Pakistan, Jaish e Mohammad, Lashkar e Taiyabba and Islamic Movement of Uzbekistan all exist in the vacated space with no US influence and capability there. This presence also spells threats to China (Xinjiang related), Russia (CARs related), Pakistan, and India. The longer the instability festers, the more intense will the networks become. Pakistan may have control on some elements but largely it too will get affected. In the past, it has played out the game of friendly and unfriendly terrorists by projecting that it is one of the nations worst affected by terrorism. That gives it grounds to continue its mission in J&K with support from some elements of the Taliban who are favorably disposed towards it. If a global war on terror was ever required, it is at this juncture as interests of most nations converge but international geopolitics will never permit that. China and Russia will want to establish some links with the Taliban to prevent gravitation of terror and radical ideological activity into their areas of influence. The US may not delink itself completely from the region. Instability from here could well move towards the Middle East where US interests lie deep. That is why the American strategy of a clean break from Afghanistan and the Middle East to focus its attention on the Indo Pacific to contest China’s not-so-peaceful rise may not fructify.

For India it is important to remain in close linkage with some nations whose stakes in Afghanistan are currently very high. Among them are Russia, Tajikistan, Uzbekistan, Iran and Qatar. It’s also prudent to remain in consultation with Saudi Arabia and UAE, both of whom have chosen to play a low-key role but whose relative importance cannot be written off.

Weapons proliferation is one of the most dangerous outcomes of recent events. The potential of human resources, terror finances and weapons reaching the J&K area to trigger a revival of violence could always be a Pakistani intent. Yet, Indian capability and experience appears sufficient to neutralize this as long as intelligence is on top, there is no attempt to disturb the well-establis