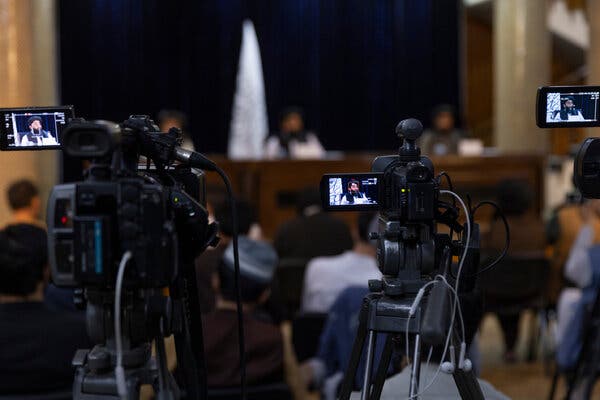 The European Union, Amnesty International, and the United Nations Assistance Mission in Afghanistan (UNAMA) have all asked the Taliban for details about the arrests of two Ariana News reporters on Monday. The two reporters, named Aslam Hejab and Waris Hasrat, were apprehended by the Taliban, according to the Free Speech Hub – an organisation that supports open media in Afghanistan. It further stated that the reason for their arrest is yet to be revealed by the Taliban.

“The Free Speech Hub demands the Taliban to release these two journalists as soon as possible and to stop restricting freedom of expression,” the organisation said in a statement, ANI reported citing Tolo News. Meanwhile, Amnesty International stated that the detention of both the journalists was unjustified and urged the Taliban administration to release them as soon as possible. “Attacks on media freedom are becoming increasingly common, posing a serious danger to the right to freedom of expression. They must be released unconditionally and quickly by the Taliban,” it added.

The UN Assistance Mission in Afghanistan (UNAMA) also protested the arrest of the two journalists, urging the Taliban to explain the reason behind their detention. It also asked the Taliban government in Afghanistan to provide information about the women activists who went missing a couple of weeks ago. “Mounting concern about the restriction on media and free expression. UN urges Taliban to make public why they detained these Ariana News reporters and to respect Afghan’s rights,” UNAMA wrote on Twitter.

Andreas von Brandt, the EU ambassador to Afghanistan, also expressed his displeasure with the detention of both the journalists. “Still hard to grasp why those you claim to work for justice and better governance don’t respect journalists working to improve transparency, governance and justice in Afghanistan,” he tweeted. Meanwhile, data from at least 15 Afghan media outlets shows that since the Taliban gained control of Afghanistan last August, the number of women journalists linked with them has decreased by 50% and that the media outlets have been downsized a big time. According to a report released by Nai, an Afghan non-profit organisation, at least 30 media professionals were killed, tortured, or injured in Afghanistan in 2021.