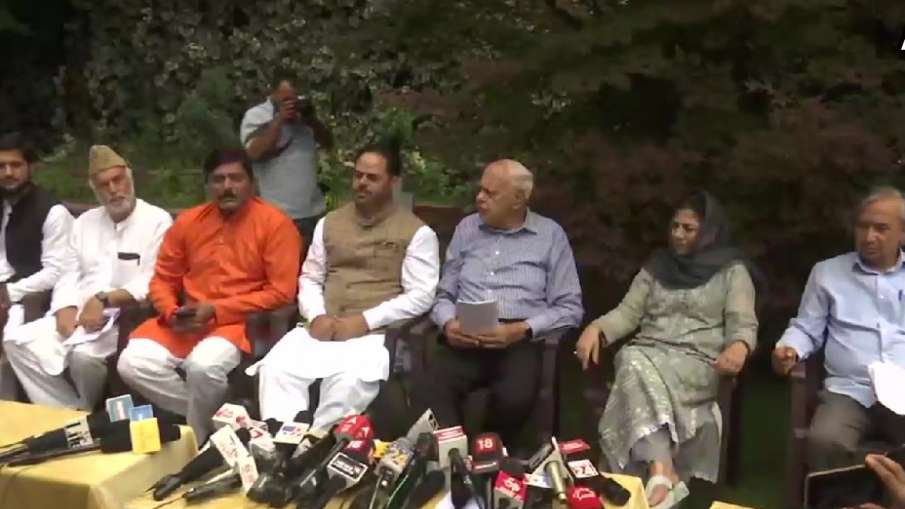 An all-party meeting was held at the National Conference president Farooq Abdullah’s residence in Srinagar over the “registration of new voters in Jammu and Kashmir. PDP chief Mehbooba Mufti also present for the meeting.

The meeting was convened following remarks by the Union Territory’s chief Electoral officer Hirdesh Kumar on the addition of voters in the revised electoral rolls after which the Jammu and Kashmir’s Directorate of Information and Public Relations (DIPR) issued a clarification on stating that there is no change in the special provisions for the enrolment of Kashmiri migrants. “There is no change in the rules regarding the buying of property and jobs in the Jammu and Kashmir’s government and no link to the representation of voters or otherwise,” it added.

“We will see what all parties think about this law,” National Conference leader AM Sagar said ahead of the meeting.

The Jammu and Kashmir People’s Conference (JKPC) chairman Sajad Gani Lone, however, did not participate in the meeting.

“We as a party neither accept the clarification given by the government in totality nor do we reject it. We know the current administration here or in Delhi doesn’t hold political parties in Jammu and Kashmir in high esteem,” Lone said

“It’s not the law that’s a threat to us, we’re scared of those implementing the law. If we feel there is demographic intervention or the rights of the people of J&K are compromised, then we will sit on hunger strike in front of Parliament in Delhi,” the JKPC leader said said

The agenda of the meeting was to chalk out a counter strategy against the all-party meeting called by Farooq Abdullah and others in Srinagar.

Notably, Election Commission on August 17 announced the schedule of the Special Summary Revision in Jammu and Kashmir, and announced that the people who were not voters in the Assembly after the abrogation of Article 370 from the region can now be named on the voter’s list.

According to an official, the person need not be a “permanent resident” of the Union Territory for the same.

The move was opposed by PDP chief Mehbooba Mufti who called it the “last nail in the coffin of electoral democracy”.

Addressing a press conference last week, Hirdesh Kumar, Chief Electoral Officer, J-K and Ladakh, said, “After the abrogation of Article 370, many people who weren’t voters in the Assembly can now be named on the voter’s list to cast their vote… and no person needs to be a permanent resident of the state/UT.”

According to the schedule, Integrated Draft Electoral Roll would be published by all Electoral Registration Officers on September 15, 2022. The period between September 15 and October 25 has been earmarked for filing claims and objections and all disposals in this regard would be completed by November 10.

Checking of health parameters and obtaining the Commission’s permission for final publication, updating the database and printing of supplements are to be done by November 19, 2022. The Final Electoral Roll would be published on November 25.

The Chief Electoral Officer reiterated that any person attaining the age of 18 years on or before October 1, 2022, who is otherwise qualified to be enrolled as an elector in the Electoral Roll, can apply for his registration during this special summary revision.

The final electoral roll after due disposal of all claims and objections filed within the stipulated time period would be published on November 25, 2022