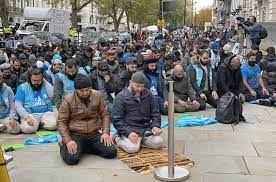 Thousands of protesters demonstrated outside the Chinese Embassy in London and the Chinese consulate in Manchester on Saturday as part of a weekend of protests worldwide, demanding that the Chinese Communist Party stop its genocidal policies against Muslim Uyghurs in Xinjiang and shut down a network of “re-education” camps that have held up to 1.8 million Uyghurs and other Turkic minorities. The Stand4Uyghurs campaign was organized by a coalition of over 50 British Muslim organizations in an effort to rally a largely reticent Muslim world to speak up for the persecuted Uyghurs. Salman Butt, the chief editor of Islam21c, a digital Islamic news platform, was the campaign coordinator of the event in the UK. He spoke with reporter Nuriman Abdurashid from RFA’s Uyghur Service about the demonstrations and the messages that the coalition wants to send to Muslims in East Turkestan, the Uyghurs’ preferred name for Xinjiang, and to the Chinese government. The interview has been edited for length and clarity.

RFA: What is the Stand4Uyghurs campaign?

Butt: The Stand4Uyghurs campaign is part of our impact element, and it’s a broad coalition of 50-plus British Muslim organizations. We want to expand as far and wide as possible, and its aim is to channel people towards effective action for the Uyghur cause of East Turkestan.

RFA: How did you decide to hold the [London and Manchester] events, and what triggered the large turnout?

Butt: The protests yesterday happened simultaneously in London and Manchester. In Manchester, there were approximately 350-plus people, and in London there were thousands — some estimates range from 2,000 to 3,000-plus. The people were there primarily in order to simply stand with our Uyghur brothers and sisters to show that we are all part of one body, that any attack on the Uyghurs is an attack on us, and if they are prevented from speaking, then we will speak for them and give them a voice.

RFA: Could you elaborate more on the slogan “Tell the Uyghurs who we are, la ilaha illal lah” [there is no God worthy of worship except Allah]?

Butt: So firstly, we know that this statement “Tell the Uyghurs who we are, la ilaha illal lah” is one of the core causes why the Chinese Communist Party wishes to persecute the Uyghurs because it renders the Uyghurs and other Muslim minorities slaves of Allah first and foremost, rather than being slaves to the state party, and that is a threat to them. And they want to assimilate them. One of the things that the Chinese Communist Party is doing is trying to remove the Muslims, trying to remove the Islam and the iman [faith] from the Uyghurs and the other Muslim minorities in East Turkestan. Part of their call is that you’re not Muslim, you’re Chinese. This kind of assimilation is an aggressive assimilationist attempt. We wanted to reaffirm that these brothers and sisters are indeed part of our broader collective. This is who we are. This is why we are standing for them and standing with them. And this is why the statement is one that they need to hold fast to as well. So, it’s showing again our united Kalima [statement of faith] cause and a united word with the Uyghur brothers and sisters across the world.

RFA: What message do you have for the Uyghur diaspora?

Butt: My message for the Uyghurs in the diaspora is wherever you are, whatever’s going on, we want you to know that we are with you and, inshallah [God willing], ummah [the Muslim world/community of believers] has not forsaken you. The Muslim ummah is there, is present, and our leaders or our people who have been in charge of our institutions and our governments and so forth may have agendas, but the vast majority of the masses of Muslims the body of the ummah is with you, inshallah, and we want to give that moral support.

RFA: What’s your message for the Chinese government?

Butt: Our message to the Chinese government is clear. This behavior has to stop immediately. These are demands. We read our demands on the day as well. We were not asking for something unreasonable. It’s basic things that any civilized human being would expect to stop the persecution and open up the mosques, close down the concentration camps, and let the Uyghurs practice their deen, their faith, with dignity.

RFA: Do you know why the Chinese flag was removed from the Chinese Embassy in London on the day of the protest?

Butt: I don’t know why the Chinese flag was removed. We noticed that when we were setting up that it wasn’t there. My own suspicion is that maybe they were afraid or ashamed because of the demonstration that was about to happen because their people were notified much earlier when this demonstration was going to happen.

RFA: How did the UK government react to the protests?

Butt: We have not had any reaction from the UK government thus far that I’m aware of.
Our campaign is a long-term one, and God willing, inshallah, to form an Islamic and Muslim-led platform welcome to anyone who wants to stand with us on this. But it’s there to fill a void because most of the loudest voices are against China and there is a crucial absence of an Islamic grassroots voice that is genuinely critical of all types of oppression. This is what we want. We’re calling people to stand on this platform with the Uyghur brothers and sisters. Our aim is to motivate people, to inform people about who the Uyghurs are and what is happening to them, and then to channel them into effective action.