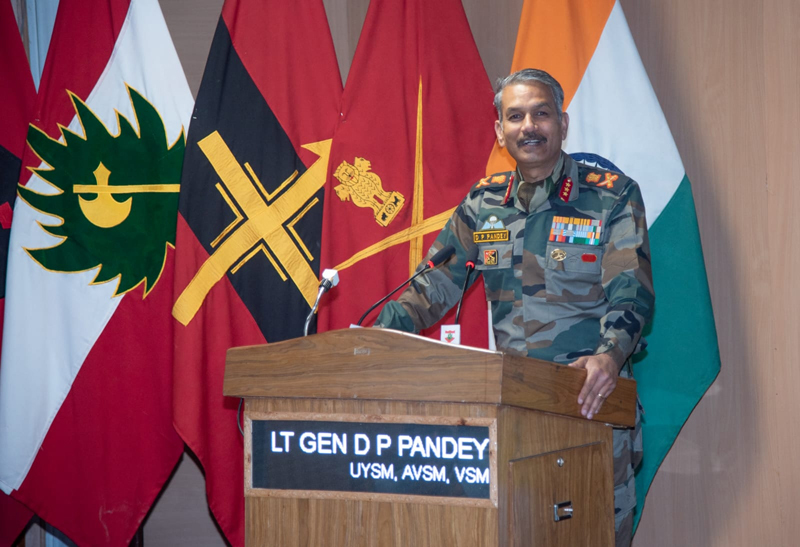 A one day seminar titled, ‘Kashmir At Historic Crossroads’ was conducted by Chinar Corps in conjunction with a Kashmiri Think-Tank, ‘Kashmir Chapter of International Centre for Peace Studies’ at BB Cantt here

The seminar was third in the series of seminars organised to create platforms for intellectual debates on issues pertaining to Kashmir.
The seminar had six speakers from cross section of intelligentsia speaking on topics relevant to ushering in permanent peace in Kashmir. Ashok K Behuria of Manohar Parrikar Institute of Defence Studies speaking on a faltering and isolated Pakistan, explained that it was a strategic opportunity for building a lasting peace in Kashmir.
Prof Ashok Aima, ex Vice Chancellor of Central University of Kashmir and member of International Centre of Peace Studies highlighted Pakistan induced propaganda to politically and religiously mislead the youth. He emphasized on the role of various segments of society and departments in countering negativity emanating from Pakistan.
Dr Muzaffar Khan of J&K Police Rehabilitation Centre, Srinagar spoke about increasing drug abuse and narco terrorism fuelling conflict in Kashmir. He talked about the ‘denial of society to accept the problem’ and explained various initiatives undertaken by the Govt to tackle the drug menace and encouraged citizens in identifying drug peddlers and at the same time assisting the misguided youth to shun the habit.
Javed Ahmad Beigh a peace activist and journalist from Badgam addressed the problem of continued refugee status of Kashmir Hindus.
Eminent Kashmiri journalist, Saleem Pundit, working with the Times of India, spoke on role of free and fair media as a pillar of democracy in J&K.
Saba Sheikh, an advocate and working through White Globe NGO, addressed the issue of impact of conflict on women and role of women in reconciliation and peace. She passionately spoke about the women all over the world and in Kashmir need to fight for and get their equal status in society.
Sheikh Khalid Jehangir’s latest book on Kashmir titled ‘Why Article 370 had to go’, was also released on the sidelines of the seminar. Sheikh Khalid Jehangir, who is Secretary General, International Centre of Peace Studies, has previously written a book titled, ‘They snatched my playground’ which has been well received by the literary world.
Lt Gen DP Pandey, GOC Chinar Corps, complimented all the speakers on their insights and detailed talk on the subjects. While addressing the gathering, he said that Kashmir has been impacted by geo-political maneuverings, resulting in seven exoduses of Kashmiri Pandits from Kashmir valley.
‘Pakistan’s continued use of Kashmir as a tool to hit at idea of India and continued propaganda to misguide youth has had severe impact on the outlook of peace-loving and progressive Kashmiri society,” he said.
Lt Gen DP Pandey outlined emerging geo-political forces and developments, which will have an impact on India, including Jammu & Kashmir. He listed out; firstly, force of moderation and modernization in West Asia’s Islamic countries, secondly, rise of China entwined with West’s plans to counter balance her, thirdly rise of India post COVID-19 pandemic and lastly, unfolding of new realities of Pakistan under the impact of exit of US led forces from Afghanistan.
He further said that, with external influences compelling Pakistan to correct its path of being the terror hub of the globe, has resulted into an opportunity for Kashmir to breathe peace and happiness as well as break out from the shadows of terrorism, brought upon by Pakistan controlled nexus. Lt Gen DP Pandey extolled the Kashmiri society to lead the Govt efforts in bringing lasting peace in Kashmir valley.