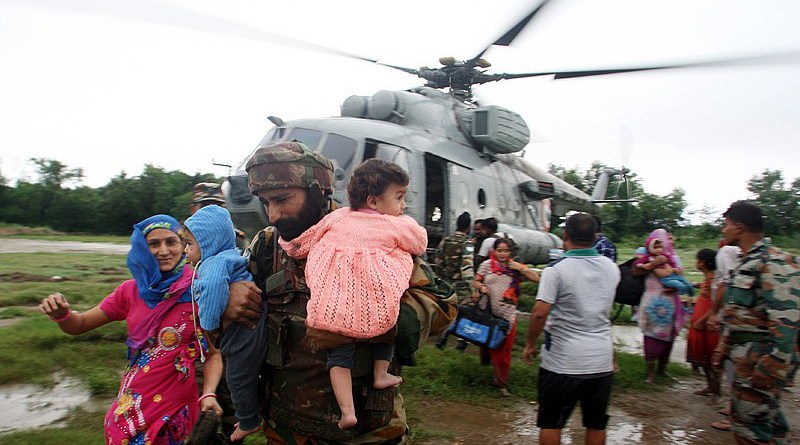 Some people associate the army in Kashmir only with anti-terrorist operations and there’s nothing wrong in this as our soldiers are in the thick of a proxy war unleashed by Pakistan in this region. Even though many are aware of the wide-ranging assistance being provided by army to empower locals and improve their quality of life under Project Sadbhavna [Goodwill], not many know about the sterling role the army is playing in providing humanitarian assistance at grassroot levels to needy inhabitants of J&K. This is because of two reasons- one, since they are devoid of sensationalism, such incidents seldom make it to the national news, and two, the army doesn’t quite believe in blowing its own trumpet.

Last week, a man named Bashir Ahmed, decided to go from Katua, which is situated in the lower reaches of J&K, to Marwah Valley alongwith his wife and three children. Even though this trek entailed an arduous walk involving an ascent of 11,000 feet while negotiating the Naginsur ridge, he wasn’t perturbed, as being from the bakarwal [nomad] community, he and his family members were quite accustomed to such journeys while grazing sheep.  Furthermore, he along with his family had walked this route many a times during seasonal migration and since the weather during this time of the year remained clear, there was no reason for him to worry. However, metrological conditions in mountains can be very unpredictable- as the seasoned nomad Ahmed would soon realize.

While this family was enroute, tragedy struck in the form of a freak blizzard accentuated by heavy snowfall. Fearing that they may get trapped and being ill-equipped to protect themselves from high velocity winds and snow, run the risk of losing life or limb, Ahmed’s friends approached the nearest army post at Chingam for assistance. The thumb rule of rescue operations in snow covered mountainous terrain is to wait for weather conditions to improve so that the rescuers themselves don’t get trapped due to adverse climatic conditions and further complicate the situation. This is all the more necessary when the rescue team has to go into an unfamiliar area and this was true in this case.

However, since the Ahmed family wasn’t carrying sufficient warm clothing to ward off extreme cold or food to sustain themselves, there was no way they could protect themselves from hypothermia [extreme exposure], which could prove fatal. Realizing the criticality of the situation, the army post commander decided to take the risk of launching the rescue mission in inclement weather. After a 24 hours grueling trudge in the snow, the rescue patrol succeeded in locating the Ahmed family and provide them with the much-needed medical aid and succor. For Ahmed this was really a blessing in disguise as one of his children had taken ill and things would have become serious had the army men not arrived.

On May 14, a group of Bakarwals were moving from Kalakote area of Rajouri district to Kupwara in North Kashmir in search of greener pastures. While traversing the densely forested jungles in Poonch district, a wild bear attacked a 19-year-old member of this group named Mohammad Sharif, badly mauling him in the face and head. His hapless associates approached an army post in Poonch district for assistance.

The army immediately rushed out a Quick Reaction Medical Team to attend to and provide medical assistance to the bear attack victim. While this team was able to arrest the flow of blood and provide immediate medication to stabilize the patient, the nature of injuries was serious and required immediate hospitalization. Realizing that he required more advanced medical attention immediately, the army men evacuated Sharif on a stretcher to the Primary Health Centre at Saujiyan, located more than two kilometres from the site of the incident. Due to the timely intervention and speedy evacuation of the victimExtrication from River in Spate

On May 18, Sajid Ahmad Mir, hailing from Anantnag, and Mushtaq Ahmad, a resident of Ramban, were working on banks of Marua River near Nawapachi village in Marwah Valley of Kishtwar district when the JCB in which they were seated accidentally plunged into the fast-flowing river. The current was so strong that it even washed away a heavy vehicle like JCB for a distance of half a kilometre. As the JCB got submerged, its trapped occupants were trapped and in imminent danger of drowning.

Locals approached the army post at Nawapachi, which immediately dispatched a rescue column to rescue the trapped JCB crew. However, there was a problem. The rescue operation entailed securing ropes to the JCB, which would facilitate safe extrication of the stranded duo and to do so, someone would have to enter the river and fix ropes to the JCB. Since the JCB could topple due to the fast current and shifting sand below, time was at a premium and the army men rose to the occasion by plunging into the river and fixing ropes.

After more than an hour and a half of superhuman efforts, the army rescue team succeeded in bringing the trapped men to safety. In this rescue operation, the army was wholeheartedly assisted by J&K police and locals- a wonderful example of the exemplary coordination that exists between the army and police as well as their excellent rapport with civilians.

The above-mentioned incidents are but a few of the numerous instances of the army in J&K extending a helping hand to locals even when it is fraught with the risk of bodily harm, and this praiseworthy attribute of remarkable bonhomie merits attention. The first thing that strikes the mind is, what makes the rank and file of the Indian army so forthcoming in helping civilians who are victims of unfortunate accidents? The answer lies in the time-honoured army tradition of reaching out to their brethren in need of assistance, even if it involves putting men in uniform in grave danger and one such shining example is that of Col MN Rai.

In January 2015, the father and brother of a local terrorist who had been trapped in a house alongwith another terrorist approached and told Col Rai that they would convince him to surrender. Touched by the old man’s appeal and wanting to save the life of a misled youth, Col Rai acceded to this request and went near the house with the father-son duo to convince the trapped terrorist that he would come to no harm if he surrendered. However, instead of surrendering, the holed-up terrorists opened fire which caused the death of Col Rai. Can there be any other parallel of such great concern for a civilian’s life.

So, while All Parties Hurriyat Conference and the pro-Pakistan lobby may try their best to demonize the Indian army, the people of J&K are with them- a fact vindicated by timely and specific information being provided by locals regarding the location of terrorists- be it Burhan Wani or Riyaz Naikoo.