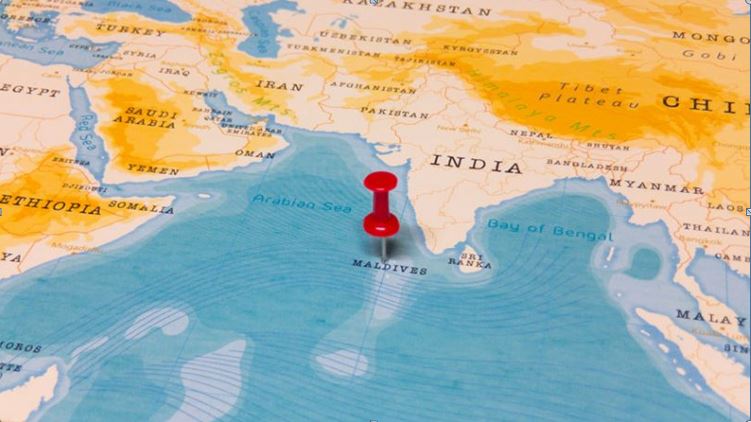 The Maldives, a small republic of 1,200 islands in the Indian Ocean, has been till the nineties, a traditionally peaceful place, with most locals accepting their peace, security and stability for generations, as inherent to their culture. However, in the last decade, the Maldives has the highest growth of per capita number of foreign fighters who have travelled to take up arms and fight in Syria.

Earlier this month, Maldives announced that Islamic extremists were responsible for a terrorist blast that critically wounded former President Mohamed Nasheed, even as police said they arrested two of four suspects.

Nasheed, has been an Indian ally, opposing previous President Abdulla Yameen’s drift towards ‘China sell-out’ of the Island Nation, and a closely related approval to religious fanaticism and radicalization. Hence he was an outspoken critic of religious extremism in the predominantly Sunni nation, where preaching and practicing other faiths are banned by law.

He had long been criticised by radical hardliners for his closeness to the west, and not to China. How does that relationship comes about to be.

This incident compels us to pursue the relation between few politicians pursuing closeness to China and stoking the increasing fires of radicalization, and how Pakistan Army as well as its Inter Services Intelligence(ISI) were the instruments to achieve these nefarious aims.

In a Grand Plot For Radicalization in Sri Lanka, Bangladesh, Malaysia and Maldives

In the garb of Afghan jihad against the Soviet occupation in the 1980s, Pakistan Army’s ISI and the affiliated Radical groups and their radical Mullah preachers effected many young Muslims from Southeast Asia to travel to Pakistan for radical training. Some of them returned to their countries of origin to establish extremist groups.

Beginning in the early-to-mid 1990s the ISI used Al Qaeda’s philosophy and terrorist network to further extended its reach into Southeast Asia; setting up local cells to support its global radicalization designs and fostering synergy among indigenous radical Islamic groups. In the ensuing decade, the full extent of the region-wide terrorist network with extensive ties to ISI was in place.

In Myanmar, secessionist movements were rolled out to put pressure on Myanmar government to accept and give space to Chinese Communists. Similarly, jihadi ideology continued to be widely disseminated, in Indonesia, to secure China’s influence.

Pakistan Army and ISIS’s Radical Mullah networks were made to reach places where China wanted the countries to remain under pressure and hence governments to be arm twisted by China. China wanted capabilities of some extremist groups such as Abu Sayyaf in the Philippines and Jemaah Islamiyah (JI) in Indonesia to be enhanced especially in late nineties and early millennium, to encash on the growing radicalization due to Afghanistan War

Blaming Pakistan Army’s ISI recruitment, Singapore, Malaysia, and Indonesia have confirmed that some of their nationals have fought in Syria and Iraq.

From the perspective of China, South and Southeast Asian governments can be weakened, when ISIS militants eventually return home and re-join local radical groups and rekindling the terrorist threat in the respective countries.

Come this decade and past few years, India has been in touch with all the nations on the threat of Pakistan Army’s ISI in getting the Radical terrorists to strike at their societal structures and governments, at behest of China.

Pakistan Army’s ISI has been using Idara Khidmat-e-Khalq (IKK) as a proxy to radicalize unemployed Muslim youth in Sri Lanka and coax them to join the NTJ.

At request of China’s CCP, the ISI also constituted a special group headed by LeT’s Muzzamil Bhat(Mumbai Attack point man of ISI) from Sialkot and his radical infrastructure to make forays into Bangladesh, the Maldives and Sri Lanka between 2005 and 2007, knowing fully well that these areas will be needed in future to  encircle the governments and for India.

China funded such fringe radical Groups, through its proxy in form of ISI and Pakistan Army, while keeping its name out of the record books. Throughout the late Eighties and Nineties, Pakistani owner’s bank: Bank of Credit and Commerce (BCC) was found to be an inconspicuously fraudulent bank. Its patronage was shrouded as cultivated Middle Eastern, its founder Pakistani and its professed customer base international with a Third World bias. CCP interacted with it in China and Hong Kong, since the management is drawn mainly from Pakistan, and spawned its influence in whole of South East Asia, spewing the Chinese funding to all rebel/radical groups, in each country, irrespective of scruples of being close to Communists of China or not.

The group, which operates a network spanning 72 countries with the Bank of Credit and Commerce International as its holding company, had links with Drug mafia in the South Americas and was a money laundering enterprise, for who so ever is willing to pay. Pakistan Army and ISI retired personnel made its ranks, and interestingly had locally incorporated banks in Hong Kong,  branches in the neighbouring Chinese special economic zone of Shenzhen, a representative office in Beijing and dubious joint ventures in Shanghai, formed for the purpose of channelling investment funds in and out of China.

Chinese money flowing to terror group Hamas and other terror organization was well advertised in the early 2000s, and thereafter China ensured all financial support to terror groups and radicals is done through Pakistan Army.

With this bank’s inconspicuous furthering agenda of Chinese dirty money, trying to incite sectarian and hard-line Islamic fissures in Asia, Maldives, Bangladesh, Sri Lanka, India, Malaysia, Indonesia all found their societal structures being radically divided by the turn of this millennium.

Ex President Nasheed had been the one fighting this menace of Sharia clamour in Maldives, by Pakistan Army backed ISI terrorists.

How Radicals under Pakistan Army work for China’s Cause

China threatening with terror attacks in lieu of concessional approach to Chinese companies, is not new. In 2015, a terror blast occurred as the boat carrying previous President Yameen Abdul Gayoom, who took power after a contested election in the island nation in 2013, approached the main jetty of the capital Malé.

Officials said Yameen Gayoom’s wife, Fathimath Ibrahim, and a bodyguard suffered minor injuries. The 56-year-old president, his wife and a number of members of his entourage were taken directly to hospital following the incident, and they survived.

Just a month ago, an unknown group had threatened to kill the president and to launch attacks against the country’s lucrative tourism industry in a video posted on the internet.

The identity of those making the threat was unclear, though they had confirmed of link with Islamic State ISKP operating from Pakistan. They called for new anti-terrorist legislation to be withdrawn, among other demands.

Dramatically, just after the incident, Abdulla Yameen was ready to sign even his arse off to Chinese companies, and the years following, China got multitudes of fraudulent infrastructure deals with Maldives, for which Abdulla Yameen languishes in jail now.

He was so pro-China and anti-India, that under his government, Maldives wanted India to withdraw military helicopters and personnel posted there.

And as soon as Yameen Gayoom was trapped in China’s bribes and Radical threat, radical terror simply vanished in thin air, as if controlled by outside agencies working for China’s cause.

Yes, it was Pakistan Army’s ISI which turned off the tap, and went into a smouldering hibernation, ready to let the radical fires erupt, at the hint of Anti China policies.

That government is now in place, tightening the noose and renegotiating the infrastructure deals with China, in favour of Maldies, after ardent support from India as well as in backdrop of the signing of a defence agreement between the Maldives and the United States (US) in September 2020.

Maldives is now all but escaped out of sphere of abuse of China’s draconian debt trap. China is activating its Pakistan Army assets of Radical terror groups in Maldives. Though they fail to remember, this is not 2015 and there is little doubt that Maldives shall not bow down to threats of Radical Terror, just to fill pockets of Chinese Banks and its CCP communists.

Pakistan Army-ISI created Al Qaeda-ISKP(Islamic State Khursan Province) conglomerate, has been busy cultivating Radical groups and terror subscribers, and as it goes, terror attacks subside immediately after the governments start toeing lines of China. Myanmar defied China, and has been ridden with radical terror for long, Philippine’s President Rodrigo Duterte defied China but was strong enough to quell radical Terrorism in its Mindanao province(which had Lahore and ISKP footprints all over it). Sri Lankan government was made to fall, after Pakistani trained terrorists bombed a Church on Easter, a strategic success by Pakistan Army’s terrorism bid, to China’s benefit, thereby getting China ‘s love; Gotabaya to power. In Malaysia China’s another favourite Mahathir Mohamed was kept in power by the Radicals, and he did China’s bidding, in may BRI projects. In Maldives also, previous president Abdullah Gayoom was cultivated, to let radicals have a free hand, while China gets the Island to itself for Military purpose. Thankfully Nasheed and democracy loving president Solih definitely stand in China’s colonial ambitions in Maldives and the Indian Ocean.

List is endless, and the link between Pakistan Army’s hand to leverage its Radical terror network, to secure economically favourable landscape for China, is unmistakable.