AUKUS vs. QUAD: A Reality Check 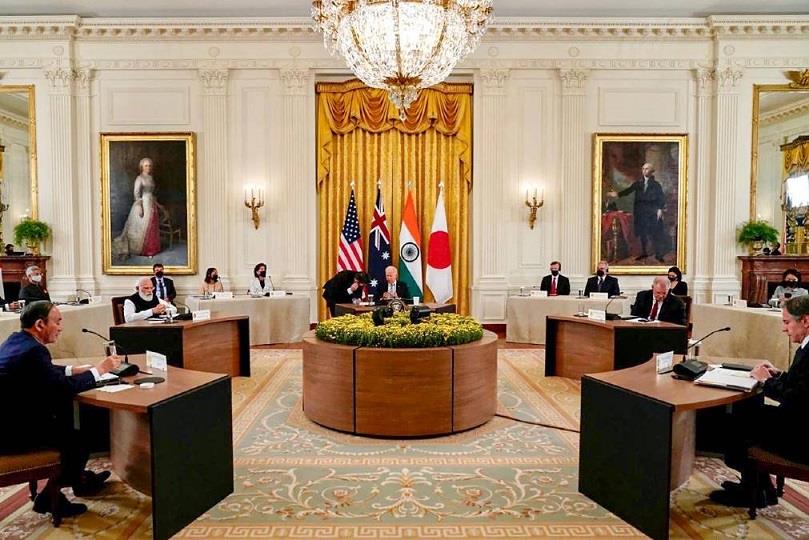 The past week saw the US’s hard push to contain China in its own backyard, by the formation of a new defence agreement known as AUKUS, with no precedent in diplomatic world, as the regional might of the new alliance is already covered by an old alliance named Quad.

AUKUS-named after Australia, United Kingdom and United States proclaims to bring hard military power to support the order built by the United States in Asia, and “sustain peace and stability in the Indo-Pacific region”, as per a statement by the White House.

Observers are quite perplexed by this new American action, as it has no parallel in the modern day diplomatic history. Some describe it as Anglophonic camaraderie. Through AUKUS, for the first time in history the US will share its nuclear technology with any country. The new agreement will deliver 60 attack submarines, including six nuclear attack submarines to be built by the UK and technology provided by the US.

It has also built artificial islands in the South China Sea and constructed massive runways and shipping docks, while also reportedly installing missile systems on the Spratly Islands. It has rejected competing claims from Brunei, Malaysia, the Philippines, Taiwan and Vietnam in the South China Sea.

Chinese President Xi Jinping has warned against “interference from external forces” in the region, as Australia shrugged off Beijing’s growing anger about AUKUS. In an address before the Shanghai Cooperation Organisation (SCO), Xi urged heads of state to “absolutely resist external forces to interfere [in] countries in our region at any excuse, and we hold the future of our countries’ development and progress firmly in our own hands”.

China’s state-owned publication Global Times also described Australia as “a pawn of the US” and called it “naive” for financing “America’s cold war gambit”. “Australia could face the most dangerous consequence of being cannon fodder in the event of a military showdown in the region.”

AUKUS has caused much consternation and anger in France—because Australia terminated an earlier deal with Naval Group, a state-controlled French company, to build a dozen diesel-powered submarines.

French Foreign Affairs Minister Jean-Yves Le Drian, who laid out his own vision for the Indo-Pacific in a July visit to Washington, called the announcement a “stab in the back” and ordered a recall of the French ambassadors from Washington and Canberra.

In their responses, French officials and some commentators have cast the announcement as an indication of a major strategic shift, particularly on the part of Washington. The move, they assert, represents a kind of geopolitical infidelity by the United States that demonstrates it does not take France (and by extension, they hasten to add, Europe as a whole) seriously as a partner.

The announcement has also fuelled fears that Europe is being cut out by Washington, with EU nations still smarting over the way the US handled the withdrawal from Afghanistan

The EU has complained that it was kept out of the loop on a new military partnership between the US, UK and Australia, as Brussels was planning to lay down its own strategy for the Indo-Pacific on 17 September.

“We regret not having being informed, not having been part of these talks,” EU foreign policy chief Josep Borrell said.

The 27-nation bloc is looking to strengthen ties in the vast region where it says it is “already the top investor, the leading development cooperation partner and one of the biggest trading partners”.

But Borrell insisted the strategy was “one of cooperation, not confrontation” with China.

In a series of media interviews, Morrison said his government was reacting to changing dynamics in the Asia-Pacific region, where territory is increasingly contested and competition is rising.

Morrison told Australian media that the defence alliance had been “well-received” in his discussions so far with leaders in Japan, India, Singapore, New Zealand, Fiji and Papua New Guinea.

For New Delhi, AUKUS isn’t good news, either. The new accord raises questions about the importance of the Quad—the four-nation alliance of the United States, Australia, Japan and India. In particular, New Delhi will worry that the United States is concerned only with pushing back against China, leaving its concerns about Pakistan and the western Indian Ocean unaddressed. India also felt left out of the regional political dynamics when it was not invited to join the Doha talks with Taliban alongside the US, Pakistan and Qatar.

Indian PM in the US

Meanwhile the Indian Prime Minister Modi met the US President Biden and Japanese and Australian PMs at the White House in Washington for the first Quad summit on 23rd face to face and discussed the priority areas for Quad.

Biden said this is a grouping of “democratic partners who share a world view and have a common vision for the future” and are “coming together to take on key challenges”. Evolving a common approach to emerging technologies, cyber security and addressing the challenge of climate change and space cooperation, and Covid vaccination. This means that Quad will act as a socio-economic organisation and the region’s defence will be led by AUKUS, which leaves India in the cold regarding its concerns of Chinese aggression in the North China Sea and Indian Ocean.

However, Mr Modi’s bilateral meetings with the POTUS and the VP regarding AUKUS and Quad didn’t resulted in any benefit for India. Instead he got lessons on maintaining democracy, democratic traditions and democratic institutions by both the American leaders, whatever little the US media reported revealed and that might have forced him to change his address at the UNGA on the theme of democracy in the region.