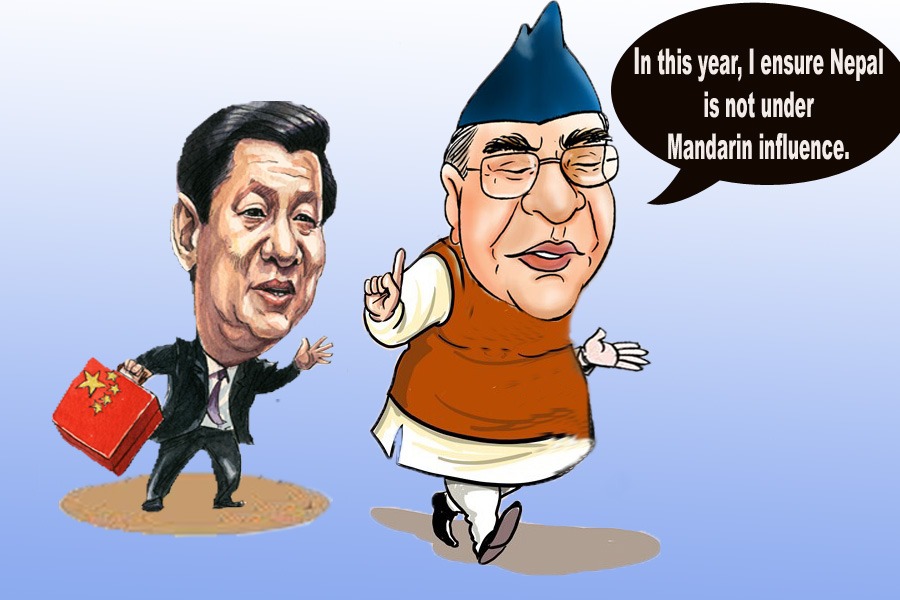 Has got the Dragon Jittery!

Nepal’s main opposition leader Sher Bahadur Deuba was sworn in as prime minister on Tuesday a day after the Nepal court rejected the dissolution of elected parliament by the wily pro-China Oli, following months of the political slugfest. Expert suggests, China’s hold on Oli and resultant undermining of Nepal’s sovereignty, culture, and economy have been fiercely contested by the opposition, and by Deuba’s core group in particular.

Recently, against China’s meddling in its affairs, and using Pakistan exported radicalism, the ruling party Maldivian Democratic Party (MDP), has accused news publication Dhiyares and its co-founder and writer Ahmed Azaan, of engaging in a “continuous barrage of anti-India vitriol”, which it said appears to be a well-funded, well-orchestrated, and pre-meditated political campaign at the behest of China, with the express purpose of whipping up hatred against the Maldives’ closest ally, India.

In May, Chinese Ambassador to Bangladesh Li Jiming a few days back, when he suggested that if Dhaka joined the QUAD grouping of countries (India-Australia-US-Japan), which China considers a regional threat, the Sino-Bangla bilateral relationship would suffer ‘substantial damage’. It was of course riding on China’s $25 billion investment to finance 27 major infra, IT, and power sector projects in Bangladesh, and assuming it has the leverage to dictate terms.

As a slap on China’s face, Bangladesh Foreign Minister A.K. Abdul Momen slammed Jiming, reminding him that as a sovereign independent country, Bangladesh could take its own decisions on regional issues.

In 2019, Myanmar renegotiated terms for a multibillion-dollar Chinese-funded deep water port and industrial zone, shrinking the scope of the project and slashing the country’s future debt burden to its economic powerhouse neighbor.

Myanmar also had outside help: A team of India and the US economists, diplomats, and lawyers had been dispatched to the country on a pilot program to scrutinize contracts, flag bad deals, and empower the country to push for better terms with Chinese agencies and companies, according to current and former U.S. government officials.

Hence the Myanmar government conveyed to China that the port did not need to be so big or require so much debt. Officials managed to hammer out China with a deal in their own favor, the first slap on a country better known for making lopsided arrangements with weaker countries than it, for backing down in talks.

In 2016, China and Bangladesh signed a memorandum of understanding (MoU) under BRI, for 27 projects valued at $24 billion, including a variety of projects in infrastructure and energy. However, now seeing India’s resolve in 2020, and other projects going steady with India, despite COVID-19, in February 2021 Dhaka also refused five projects in the MoUs worth $3.6 billion in Chinese loan.

Buoyed and confident of their economic standing in the region and after talks with India, Bangladesh refused China’s terms of costs for BRI funding for railway projects in Bangladesh. China evidently couldn’t bribe Bangladesh and had to bow out like in many countries all over the world, after the recipient country proposed significant cuts in costs.

Now Bangladesh has refused Chinese investment in deep-sea ports suitable for a future Chinese Navy presence saddled in the Bay of Bengal, and it cancelled the Sonadia deep-sea project. They only agreed to a port project in Payra, ‘approachable only through a 75-kilometer-long canal, a very unlikely place for a naval base’,

Recently Malaysia’s new government, cited worries about sovereignty, as well as unfavourable contract terms and debt, as reasons for their decision to suspend work on BRI projects such as the East Coast Rail Link. That has since been removed from BRI contracts.

In fact, the phenomenon is gaining popularity, as the Australian federal government scrapped both the memorandum of understanding and framework agreement signed between Victoria and China’s National Development and Reform Commission.

EU and eastern Europe has been constantly downgrading the scope of BRI investments, to reinitiate terms and conditions to keep China out of their economic drive.

Whenever China is confronted, it comes up with lame excuses. China’s excuse? Apologizing for Dhaka’s hurt pride, the Chinese Ambassador explained to the media the very next day that “his command of English was less than ideal”. The diplomat tried to pacify Mr. Momen by saying that he might have misused certain words which led to his conveying something he did not want to!

This Chinese ridiculous excuse, is ingoing with the ridiculous BRI agreements it has been inking with countries in South Asia. Wit Quad a reality in South China Seas now, China has no military threats for compulsion, and most countries are reviewing the erroneous agreements.

Xi Jinping and Aung San Suu Kyi in January 2020 had signed 33 bilateral agreements that would have enslaved the south-east Asian country to its giant aggressive neighbor, including rail and deep-sea port projects along an economic corridor linking China’s south-western interior to the Indian Ocean: a blatant manner to achieve deep-sea military port in Myanmar.

This forced the Myanmar Military to finally overthrow the communist leaning Suu Kyi, and renegotiate the same in Myanmar’s favor, without the rider for a Military lease of the port in case of non-payment of loan.

China’s BRI has proved to be a scam. Chinese state-owned enterprises are a key source of funding, and most BRI projects are funded via lending from China’s banks, including the policy banks such as the China Development Bank and Export-Import Bank of China. These banks do not disclose the interest rates at which the loans are made, while recipients also keep this information closely guarded secret.

Difficulties servicing debt are likely to increase a country’s borrowing costs, which in some cases are already unfavourable given that many BRI projects are in countries that carry relatively high risk. This issue is compounded in economies running large current account deficits, as foreign investors could take flight because of doubts about solvency, depreciating currencies, and increasing the local currency value of the external debt burden. In short, the macroeconomic fallout is destined to be severe.

With Dhoklam and Ladakh faceoff, India is been now seen as the “One foot oh Ground” for the neighbours, and China’s bullying is being contested. A number of countries, such as Myanmar, Maldives, and Nepal, are reconsidering the terms of their BRI participation.

For Nepal, the last three decades have been bloody due to China’s meddling. The “Mao-badi communist war” started by China, is claimed triumphantly by the Dragon to be initiated during 1990s with 2 guns.

Nothing can be a bigger lie.

Now the thing which started with 2guns how did it turn out to be a bloody fight killing 10,000 people. The not so shocking part was all the 10,000 men killed were all Nepalese, for what? For Mao and his not-so-practical theory of Communism? Now, why would Nepal want to be a Communist state and be painted red and taught Mandarin, as was being done by Oli –Xi Jinping combine, since last 4 years.

Deuba’s political struggle since last 4 decades has been to take out Nepal’s future from China’s clutches. After failing to complete his terms four times, now a fifth chance is to get back Nepal to democracy, away from Chinese shadow, and ensure that elections in 2022, give Nepal a chance to elect their representative, who is willing to implement wishes of Nepalis, and not of Xi Jinping.