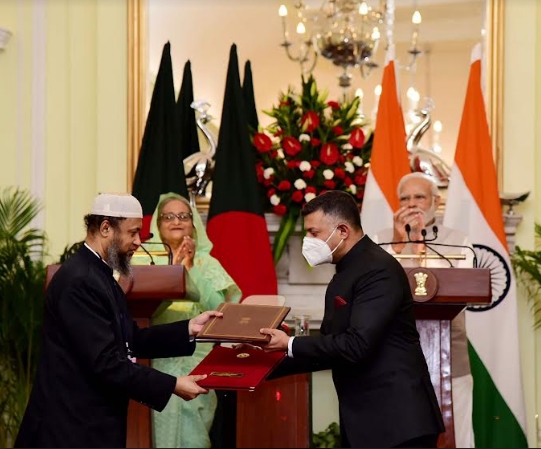 Prime Minister Sheikh Hasina of Bangladesh has called India its most important and closest neighbour. In a statement issued after holding bilateral discussions with Prime Minister Narendra Modi in Delhi on Tuesday, Prime Minister Hasina said that Bangladesh-India bilateral relations are known to be role model for neighbourhood diplomacy. Noting the progress in bilateral relations between the two countries in several areas over the last decade, Prime Minister Hasina said that both the countries had resolved many outstanding issues in the spirit of friendship and cooperation. She expressed the hope that all outstanding issues including the Teesta Water Sharing Treaty would be concluded at an early date.

Recalling with gratitude, the support extended by India during the Liberation War of Bangladesh in 1971, Prime Minister Hasina said that the Bangladesh- India ties are anchored in shared history and culture, mutual trust and respect. She appreciated Prime Minister Narendra Modi for providing added momentum to the bilateral relations between the two countries.

Prime Minister Hasina announced that the government of Bangladesh will confer ‘Mujib Scholarships’ to the direct descendants of the soldiers/officers of Defence forces of India who were martyred or critically wounded during the great Liberation War of Bangladesh in 1971.

Highlighting the areas of discussion between the two leaders, Sheikh Hasina said that connectivity, trade and commerce, investment, water resources management, security, border management and lines of credit were some of the areas discussed during the meeting with Prime Minister Modi in Delhi on Tuesday.  She said having forged a strong partnership over the last 50 years, both countries are working on an increasingly wide range of issues of mutual interest.

Earlier, after holding the delegation level talks, the two countries signed 7 MoUs. It included MoUs on sharing of water from Kushiyara river, scientific cooperation between Council of Scientific and Industrial Research (CSIR), India and Bangladesh Council of Scientific and Industrial Research (BCSIR) and MoU between National Judicial Academy, Bhopal, India and Supreme Court of Bangladesh.