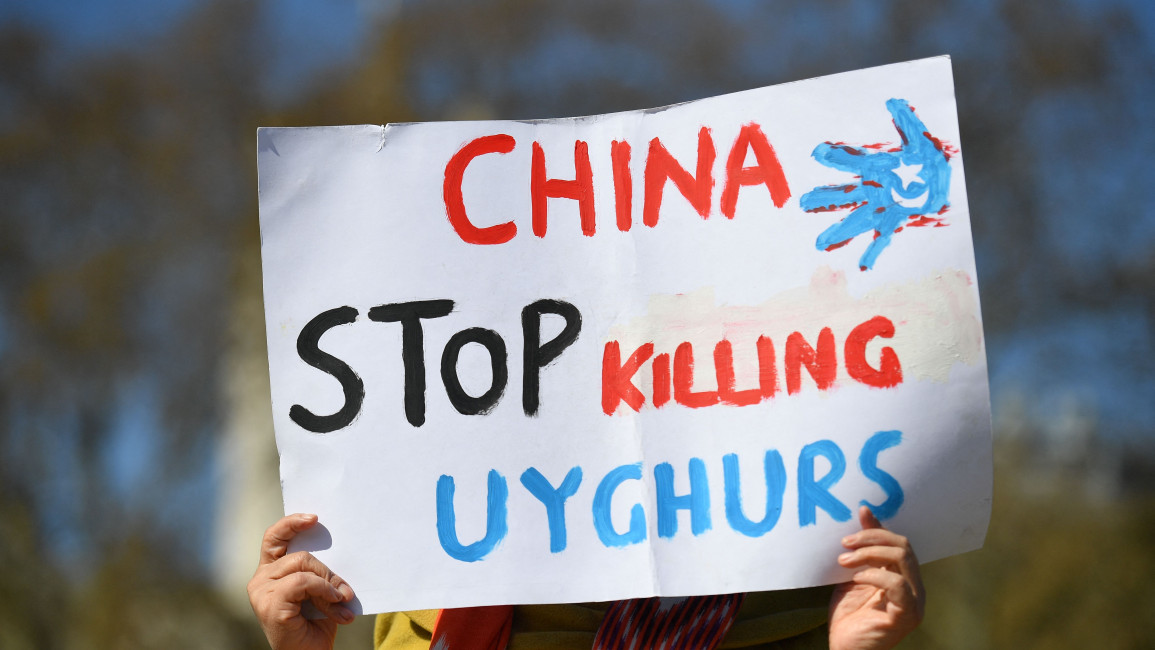 Abduweli Ayup’s niece Mihray disappeared into the black hole of internment, only for her lifeless form to be handed back to her family more than a year later. They were never told why she was arrested or how she died. There had been no court case and no legal process. The only explanation as to what had become of an active, healthy young woman was an “unexplained medical condition.”

The now exiled Uighur activist’s relative has joined the long list of thousands of those illegally incarcerated and punished that have been documented by human rights groups investigating more than one million arrests and internments in Xinjiang, North-West China since Chen Quanguo was moved from Tibet to govern the province in 2016.

It has been clear for some time that Beijing’s actions have flouted international law, but research is now showing that China is breaking its own laws by relentlessly hounding Turkic people on its northwestern flank and remaining unaccountable for a tranche of repressive measures in the Xinjiang Uighur Autonomous Region (XUAR).

Intrusive surveillance, erosion of language, culture and religious practice, torture, forced labour, coerced abortions and sterilisation and the removal of children to state orphanages are just some of the documented violations of international laws that a growing trickle of nations are already calling genocide. These measures have roused international outrage but also breach every major legal norm on Beijing’s own statute books.

Countless diaspora stories of round-ups and disappearances of relatives since 2016 have now gradually morphed into something more sinister with confirmed rumours of 12,15,20 and 25-year sentences, following prolonged “vocational training” while their cases were being assessed, for “crimes” such as praying, having a previously permitted Quran in their house, or having a religious app on their phones.

Whilst China has vehemently denied the accusations, calling its measures “legal” and justifying them in the name of the “war on terror,” anecdotal evidence from victims’ families and former detainees has now been backed up by empirical research from UK based human rights lawyers, the Rights Practice in its recent paper “Criminal Law and Deprivation of Liberty: Xinjiang Uyghur Autonomous Region.”

Arbitrary, extrajudicial sentencing, absence of due process, and disappearances of mainly Uighurs have accelerated over the past four years and have been well documented in submissions to the UN.

The Rights Practice, presenting its findings to the UN Committee on the Elimination of Racial Discrimination (CERD) and the UK parliament in 2019, highlighted the extensive and discriminatory use of extrajudicial detention as a core element of repression in the Uighur region.

But its latest report, despite being hampered by the lack of transparency in China’s official data, and cautious in its conclusions, has observed “disturbing trends” in the criminalisation of behaviour in the Uighur region and the use of criminal penalties which are both “discriminatory and disproportionate” to the so-called ” crime.”

Countless documented cases illustrate the arbitrary and seemingly unproven draconian terms of imprisonment handed down to individuals whose cases appear to be without due process or legal representation.

The well-publicised case of a retired physician, Gulshan Abbas, for example, sister of Rushan Abbas, Uighur activist and executive director of Campaign for Uyghurs is a case in point. Having disappeared in 2018 and held incognito, the family heard rumours she had been sentenced to 20 years in prison which were later confirmed by the PRC foreign ministry spokesman Wang Wenbin at a press conference in Beijing in December 2020. She had been convicted, he said, for the crimes of joining a “terrorist” organisation, helping terrorist activities and “assembling a crowd to disrupt social order”.

No formal notice of arrest or sentence, no trial notification, no legal counsel. Her sentence, according to her sister, came suspiciously soon after Rushan started to raise the profile of Uighur suffering in Xinjiang.

The spokesman resented the  “lies to smear China” and told American politicians to stop interfering in China’s internal affairs under the pretext of Xinjiang-related issues. “China is a country with a rule of law, where criminals must be held accountable,” he said.

And it is this “rule of law” and its observance that is under scrutiny. The Rights Practice has dug deep into Chinese law, probed sentencing statistics, and specific case studies to examine how Beijing uses its own legal framework to offer an illusion of legitimacy while using the so-called “legal Vocational and Training Centres” to mask much longer sentences than might otherwise be allowed.

For some reason, it concluded, there was a high-level decision not to put the use of these centres on a legal footing. “Detention in these facilities is both extrajudicial and discriminatory,” it concluded, a view shared by the China Law Translate group that has stated “Nothing in the Counter-Terrorism Law or the amended Xinjiang Regulations themselves allows for prolonged detention. This will require further legislation. That said, it is not likely these regulations were put forward without consent from central authorities, and further legal basis may be forthcoming.”

It was branded by Amnesty as deliberately vague and “a pretext to further attack religious freedom and silence, government critics. Denounced as anathema to international standards, it was used to extend the 2014 draconian year of strike hard round-ups of illegal items and purveyors of “illegal” religion. It also provided a vague and indiscriminate framework whereby those considered in need of deradicalisation could be given custodial rehabilitation. Vocational Training on a legal footing, but this was at the time branded a violation of China’s constitution.

The Rights Practice concluded that in comparison with the rest of China, arrests and heavy sentences are disproportionately high towards Uighurs in the XUAR – 2015 figures had already shown a doubling of heavier sentences in the region and there has been no subsequent data on the tens of thousands arrested in 2017. Worryingly since Chen Quanguo assumed the helm of the province, the ordinary religious observance has become equated with terrorism and religious extremism and they found no evidence of a right to a fair trial.

Chillingly, the testimony of a police officer during the recent Uighur Tribunal in London confirmed the discrimination and legitimisation of ill-treatment of Uighurs in China. During his ten year career in the force, even before he left for Xinjiang, Wang Keizhan (a pseudonym) recalled treating Uighur suspects differently and harsher than other suspects, because they were automatically regarded as “terrorists and enemies.”

Xinjiang, was a law unto itself where treatment of prisoners was concerned, he said, and rules were devised in secret by a committee. Whereas in inner China all interrogations were now videotaped, there was no such protection for Uighurs or Turkic peoples, all of whom were considered terrorists. It was an open season now in Xinjiang he suggested, where anything goes. Rules of treatment towards interned Uighurs was a heavily guarded secret, said Wang, and nothing was written down. “The state security police has every power to carry out its own rules,” he said.

Condemning the arbitrary and extra-legal treatment of his people, Nury Turkel, a Washington-based lawyer and Uighur activist described it as “illegal on every front.”  “Under international law, under their own constitution, under criminal procedures, autonomy law,” it is illegal, he said. He deplored Beijing’s attempts to frame its actions within a legal framework, describing them as “no more than window dressing” and attempts to “mislead the international community.”

Despite Beijing’s attempts at increasing judicial transparency within the country, the Rights Practice said that this means very little in the face of Strike Hard campaigns and the criminalisation of religious practice. “Released prisoners face continued restrictions on their physical liberty through ‘educational placements’ in ‘training centres’. For some Uighurs there is a revolving door between the camps, detention centres, prisons and back to the camps,” it pointed out.