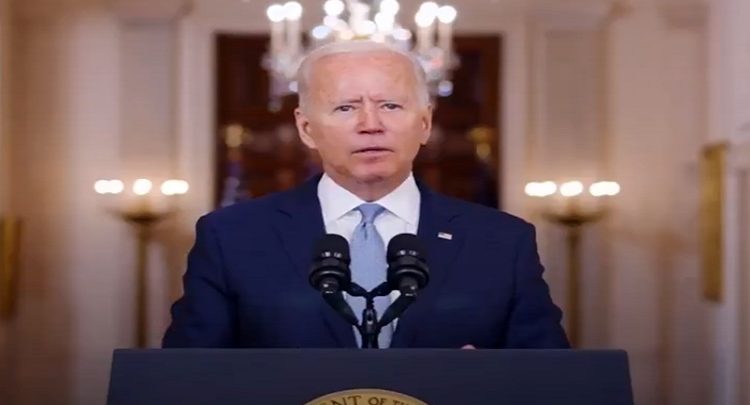 President Joe Biden’s much-awaited address to mark the end of the US war in Afghanistan was a litany of binaries, a black and white depiction of a hugely complex reality where he took no blame but all others did.

He almost shouted his words, sounding a bit frustrated and a little defensive perhaps because of the strong criticism he has faced since his decision to withdraw all US troops to say nothing about the falling poll numbers. Biden’s ratings have plummeted to 41%, according to a USA Today poll.

Things are not well in the Biden world and trouble looms for Democrats in general in the midterm elections next year. Add the Covid surge and an immigrant crisis on the southern border, and the president looks besieged and beleaguered.

But Afghanistan looms large in the news cycle, partly because the voters include a large number of war veterans who actually feel leaving their Afghan translators behind is egregious.

Biden said he would get them out. How? Going by the long and short of his latest speech the Taliban had better read strongly worded tweets from top US officials and the UN resolutions and behave. Or else.Biden defiantly defended his decision and stayed “on message.” But he made the same points he has in his last three addresses to the nation to explain his decision. That there was no choice because former President Donald Trump had negotiated a bad deal, that the Afghan army collapsed after the Americans had invested billions in training them, that the Afghan president fled the country, that the aim of defeating al-Qaeda had been achieved, that he wasn’t going to “extend this forever war” and that “it was time to end this war.” The chaotic departure was blamed on the inevitability of mayhem when wars end.Trouble is, wars don’t end because one party declares so. They end when the other side is definitely vanquished, which hasn’t happened in Afghanistan. The attack on Kabul airport last week, which killed 170 Afghans and 13 Americans, was only the first proof of what awaits the US and other countries in the line of fire, including India.

Afghan assets who fed intelligence to the CIA are gone. There are no US bases or other infrastructure in neighbouring countries Russian President Vladimir Putin is vehemently opposed to US forces in Central Asia. Pakistan is either “absolutely” opposed to providing bases or wants a price, depending on the day of the week.

Long-distance monitoring and attacks can go horribly wrong as proved by the revenge drone strike on Sunday, which reportedly killed 10 civilians, including children. The example of Iraq in 2011 is another stark example. When the US pulled out troops, the Islamic State grew in Syria and Iraq forcing their return.

On Tuesday Biden also said, “human rights will remain the centre of our foreign policy”, something that sounded hollow against the backdrop of thousands of Afghans left behind despite having special immigrant visas.

The list includes an interpreter who in 2008 helped rescue the then-senator Biden when the helicopter carrying him and two other senators was forced to land in a remote part of Afghanistan because of a snowstorm.

What role is the UN playing?

But Biden wants the Afghans to have faith in the United Nations Security Council resolution adopted on Monday. It is supposed to be the guiding light for two important goals vis-à-vis the Taliban to get safe passage for Afghans and others and to prevent Afghanistan from becoming a terrorist safe haven.

The resolution passed with a 13-2 vote with Russia and China abstaining. But more importantly, the resolution was not proposed under Chapter VII of the UN Charter, which would have given it some teeth in case the situation required intervention. Under Chapter VII, the UNSC can essentially impose sanctions on a country should it determine there is a threat to peace or detect acts of aggression.

WPS Sidhu, a professor at New York University’s Center for Global Affairs, called the resolution “feckless” because it neither empowers the UNSC to enforce sanctions, nor take military action allowed under Chapter VII to “maintain and restore international peace and security.”

He told India Today, the resolution’s language was more “conciliatory and encouraging rather than enforcing”. But resolutions under Chapter VII are very rare, he noted.

Not having one “serves the purpose of all permanent and elected members, including India. Sadly, it does not serve the people of Afghanistan or prevent the country from becoming the breeding ground of next-gen radical extremism,” Sidhu said.

Incidentally, the resolution was adopted under India’s presidency of UNSC and sources said that as always, India played a bridging role to bring together various points of view. The Russian ambassador lamented that if qualified Afghans left the country, it would amount to a brain drain. He clearly didn’t worry if they would even survive the Taliban’s vetting process.

Related to this was what Jake Sullivan, Biden’s national security advisor, said on Monday about delivering humanitarian aid directly to the Taliban. But he also said he would wait to unfreeze funds depending on the Taliban allowing people to leave. Critics, especially Republicans, saw the connection between releasing money and safe passage as another “cash-for-hostages” situation.

It is unclear at this stage whether the Biden presidency is beyond repair because stranger things have happened in politics. He is down for sure but is he out?