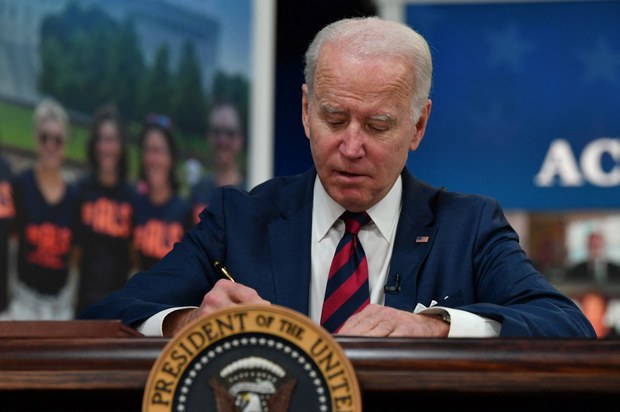 U.S. President Joe Biden on Thursday signed into law a bill banning imports from the Xinjiang region of China that lack proof they were not made with forced labor,  vowing to “use every tool at our disposal” to keep products made under coercion out of supply chains.

The Uyghur Forced Labor Prevention Act blocks the import of goods into the U.S. from Xinjiang without “clear and convincing evidence” that they were not made with forced labor. It also authorize sanctions on foreign individuals and entities found responsible for rights abuses.

“The United States will continue to use every tool at our disposal to ensure supply chains are free from the use of forced labor — including from Xinjiang and other parts of China,” Biden tweeted after signing the bill.

Biden’s signature came a week after the Senate’s unanimous passage of the bill, a move that matched full House support and underscored bi-partisan support for policies to counter abuses of Uyghurs and other Turkic minorities in Xinjiang.

“The ongoing genocide perpetrated by the Chinese government against the Uyghur people and other Muslim minorities is a challenge to the conscience of the entire world, which is why the House twice passed legislation to hold the Chinese Communist Party accountable for its exploitation of forced labor and put an end to this horrific practice,” said House Speaker Nancy Pelosi.

President Dolkun Isa of the Germany-based World Uyghur Congress (WUC) said Biden’s signature sends “a powerful message to the world that slave labor is unacceptable in the 21st century” that he expects will “encourage democratic countries especially the G7 countries” to follow suit.

“This piece of legislation will punish companies that benefit from the sweat and blood of Uyghur slave labor,” added Isa.

Series of rebukes over Xinjiang

The Biden administration and its predecessor have ramped up U.S. responses to Xinjiang abuses, including sanctions such as visa restrictions and asset freezes of Chinese officials, as well as import restrictions on tomatoes, wigs and solar energy equipment over forced labor concerns.

The Commerce Department recently added 34 research institutes and tech firms to a blacklist of purveyors of technologies that can be used to surveil and repress minorities.

Nury Turkel, vice chair of the U.S. Commission on International Religious Freedom (USCIRF), called Thursday’s enactment of the forced labor law “a great day for America and the Uyghur people who were enslaved and subjected to genocide in Communist China.”

Turkel, who is one of four USCIRF officials hit by Chinese sanctions this week, said China “has polluted the global supply chain with tainted consumer products made by enslaved Uyghurs” and this required a global effort to counter.

“The U.S. shouldn’t fight this alone, and I urge others, European countries, in particular, to get on the right of history by robust policy and legislative responses,” said Turkel, who is also a senior fellow at the Hudson Institute think tank.

China, which angrily dismisses criticism of its treatment of Uyghurs as foreign interference in its internal affairs, has sustained a series of international rebukes over its policies toward the 12 million Uyghurs and small numbers of ethnic Kazakhs, Kyrgyz and other Turkic language-speaking Muslims.

On Dec. 6, citing abuses in Xinjiang and elsewhere, the U.S. announced it will send athletes but not government officials to the 2022 Beijing Winter Olympics, which open in February. Five other countries have joined the diplomatic boycott.

On Dec. 9, an independent Uyghur Tribunal in London ruled that China has committed genocide and crimes against humanity in Xinjiang. Its ruling was based on testimony from survivors, witnesses and experts on the network of detention camps in which China has held as many as 1.8 million Uyghurs and other minorities.

Beijing claims the camps are vocational training centers set up to fight poverty and extremism.

Although the tribunal is non-binding and has no state backing, Uyghur groups responded to the findings of genocide and crimes against humanity by preparing or proceeding with lawsuits in Argentina and the U.K.

China’s pushback against the Xinjiang has included a massive propaganda effort to stir up boycotts of foreign brands and to depict Uyghurs as content with and grateful for Chinese rule, sanctions against U.S. officials, and threats to deny market access to foreign consumer brands.

The U.S. chipmaker Intel became the latest firm to find itself in China’s crosshairs, when a letter to suppliers that it “is required to ensure our supply chain does not use any labor or source goods or services from the Xinjiang region” stirred up anger in the country that was amplified by state media.

“Although our original intention was to ensure compliance with US laws, this letter has caused many questions and concerns among our cherished Chinese partners, which we deeply regret,” Intel said in an apology posted Thursday on China’s version of Twitter.

“We have stressed many times that the allegations about forced labor in Xinjiang are lies cooked up by anti-China forces in the U.S. with the purpose of tarnishing China’s image, undermining stability in Xinjiang and holding back China’s development,” he told a news briefing in Beijing Thursday.