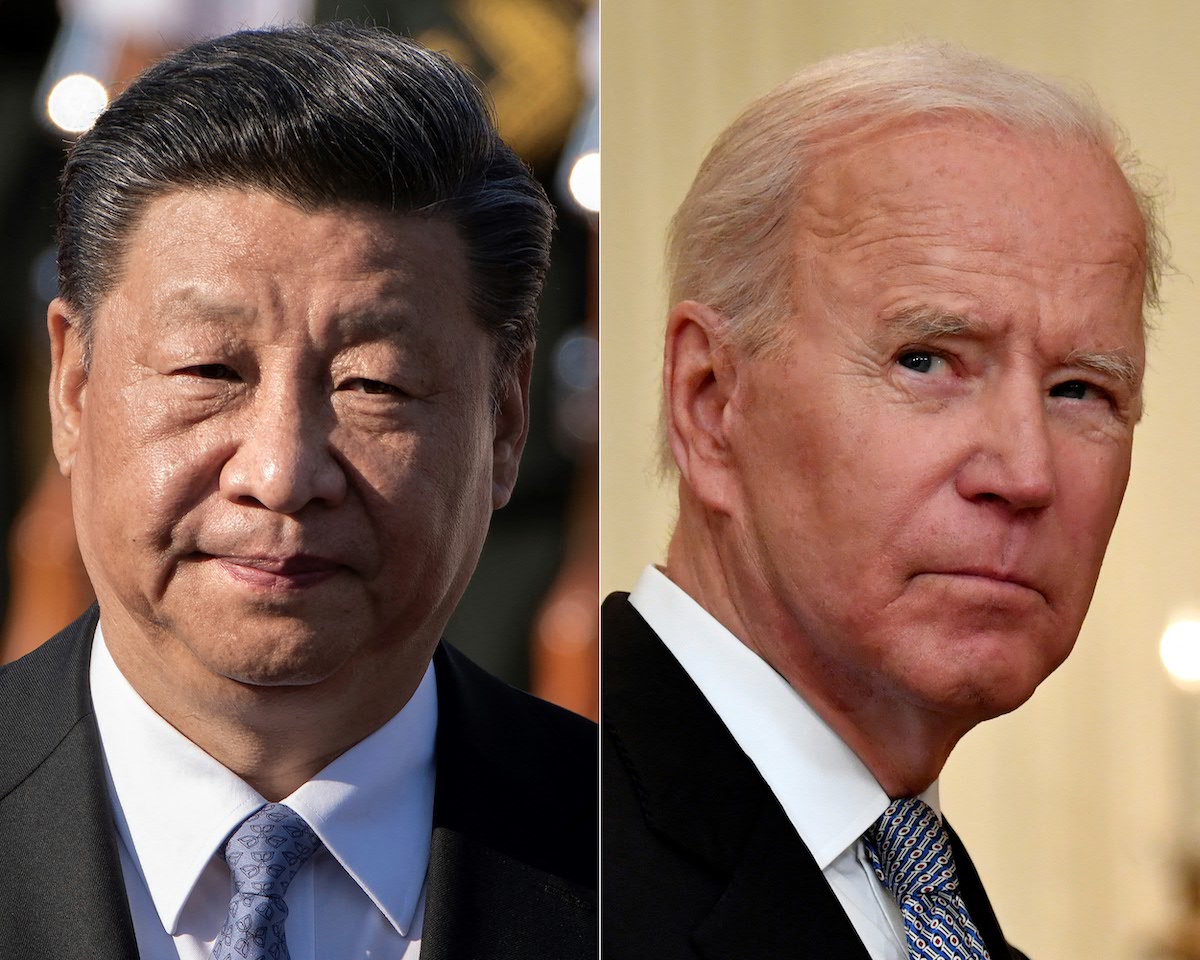 Amid an escalating new Cold War, the Biden administration is mobilizing allies and partners to slow China’s technological strides and arrest its rising global influence.

In particular, the US has doubled down on reviving the so-called Blue Dot Network, a long-dormant initiative launched by the previous Trump administration to counter Beijing’s Belt and Road Initiative (BRI).

“The Blue Dot Network will be a globally recognized symbol of market-driven, transparent and sustainable infrastructure projects,” the US State Department said after the consultation group’s inaugural meeting in Paris earlier this week.

Aside from major Western governments and Japan, leading academics, civil society leaders and as many as 150 global executives boasting a US$12 trillion in their combined portfolio were in attendance, underscoring the breadth and ambition behind the initiative.

To counter what critics see as China’s predatory trade practices, the Biden administration has also launched a “supply chain trade strike force,” which will be led by the US Trade Representative.

To bolster the initiative, the Commerce Department is set to invoke a Section 232 investigation into the national security implications of America’s reliance on Chinese rare earths imports, especially neodymium magnet.

China, for its part, aims to respond in kind, including through retaliatory sanctions against Western rivals, namely the US, and their major companies. The upshot of these tit-for-tat moves is an expanding, high-stakes trade and technological Cold War with no precedence.

In his State of the Union address in April, President Joe Biden warned of an existential showdown against China for economic and technological primacy in the 21st century. “China and other countries are closing in fast. We have to develop and dominate the products and technologies of the future,” Biden warned.

He also warned that under President Xi Jinping China is “deadly earnest about becoming the most significant, consequential nation in the world,” and that authoritarian superpowers “think that democracy can’t compete in the 21st century” because “it takes too long to get consensus” on key national policies.

Biden’s geopolitical warnings about China and the need for “whole of nation” counter-measures have apparently struck a chord in the deeply divided US Congress. In a rare display of bipartisan unity, the US Senate passed massive industrial policy legislation to significantly enhance the country’s investments in cutting-edge technology.

American Big Tech, which has largely been shut out of Chinese markets, is also pitching in. During his testimony before the US Congress earlier this year, Google co-founder and former CEO Eric Schmidt warned of China’s rapid development of next-generation technologies and called on the US government to expedite investments in crucial areas such as artificial intelligence (AI).

“America is one or two years ahead of China, not five or 10 … the Chinese are already well ahead in areas like face recognition,” said Schmidt during his February testimony before the Senate Armed Services Committee.

“The threat is very, very real,” added the former Google executive, who is also the chairman of the National Security Commission on Artificial Intelligence established under the John S. McCain National Defense Authorization Act.

United States Trade Representative Katherine Tai, the most high-profile Asian-American in the US government, will oversee the “strike force,” which will identify unfair Chinese trade practices “that have eroded critical supply chains” and recommend punitive “trade actions” accordingly.

“Our supply chain should not be vulnerable to manipulation by competitor nations,” said Peter Harrell, the senior director for trade policy at the US National Security Council.

This week, the White House also released a comprehensive 255-page special review on supply chain security matters, a product of interagency coordination among the departments of defense, commerce, energy and health and human services.

US National Security Adviser Jake Sullivan underscored the importance of the review as part of broader efforts at mitigating America’s reliance on foreign (Chinese) imports, especially in critical products such as semiconductors, rare earths and pharmaceuticals.

“Our report‘s findings reinforce the president’s call for making a once-in-a-generation investment in our nation’s production and innovation infrastructure,” said Sameera Fazili, deputy director of the National Economic Council.

In another major move, the Biden administration has gone so far as to contemplate an unprecedented trade and investment framework with Taiwan, a global hub of semiconductor production.

“We are engaged in conversations with Taiwan, or soon will be – on some kind of framework agreement,” said US Secretary of State Antony Blinken during a virtual address to the US Congress.

Given the sensitivity of the issue, with China openly warning against closer Washington-Taipei ties, the Biden administration has declined to provide greater details. Last year, the US imported $20 billion in computer and telecommunications equipment as well as $7 billion in chips and semiconductors from the self-governing island, which China views as a renegade province.

Bi-Khim Hsiao, the de facto Taiwanese ambassador to Washington, warmly welcome the move. “We want to talk about supply-chain security and technology,” said the Taipei envoy, as both sides explore closer strategic and defense ties in response to shared concerns over China’s “economic coercion.”

“Getting talks back going as soon as possible is an important part of that,” she added, almost a year after Taiwan eased its ban on imports of American beef and pork in order to expedite trade talks with Washington.

However, the Biden administration’s most ambitious move yet is the revival of the Blue Dot Network in conjunction with Australia and other major allies, which have been perturbed by China’s practices under its BRI projects.

The Blue Dot Network  (BDN), a joint US-Australia-Japan initiative, was first announced in the twilight year of the Trump administration during the 2019 Indo-Pacific Business Forum in Bangkok.

Then Commerce Secretary Wilbur Ross described the initiative as “a multilateral approach to fostering sustainable economic growth by promoting excellence in infrastructure development and supporting alternatives to predatory lending.”

The aim of the multilateral initiative is not to match China’s massive infrastructure projects on a dollar-by-dollar basis. Rather, the Biden administration and its allies seek to reinforce transparency initiatives that uphold global standards on good governance and environmental sustainability in big-ticket projects.

During the inaugural consultative meeting in Paris, representatives from major financial institutions such as Citi and JP Morgan as well as sovereign wealth fund managers such as Thailand’s Government Pension Fund were in attendance.

In parallel, the US has also been pushing for collaboration on counter-BRI initiatives with key allies, most notably the US-Japan $4.5 billion digital infrastructure initiative following Prime Minister Yoshihide Suga’s April visit to the White House.

The Biden administration aims to also enlist support from other major Indo-Pacific partners, most especially India, which has boycotted the BRI and boasts its own robust tech industry, as well as South Korea, which has been expanding its overseas infrastructure footprint under its “New Southern Policy.”

The ultimate aim here is to eventually establish a “G10” – G7 industrial nations plus Australia, India and South Korea – infrastructure development counterpart to China’s BRI, with heavy participation from the private sector.

During a high-profile speech at the Raisina Dialogue in India last year, former US deputy national security adviser Matthew Pottinger promoted the BDN initiative as a gamechanger in the global infrastructure development landscape.

He envisioned the BDN as not only raising capital and expertise, but also serving as the pre-eminent global regime for certification of major projects, “like getting a Michelin-star rating for your restaurant.”

“As that catches on, private sector players are going to want to get in and participate in those projects … So this is designed to also crowd out some of the more corrupt approaches to infrastructure investment that really threaten to undermine prosperity for all of us,” he added.