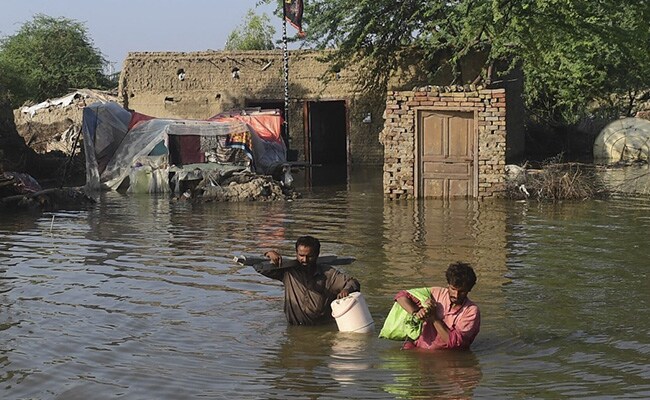 At a charity clinic in a southern Pakistani village, dozens of people affected by relentless rains and floods crowd around the door waiting to talk to a volunteer doctor. The village of Bhambro is in a poor district of Sindh province, hard-hit by record floods that have destroyed more than a million homes and damaged critical infrastructure including health facilities across the country.

Bhambro is surrounded by vast stretches of flooded farmland, its streets full of mud and strewn with debris and manure — conditions ripe for outbreaks of malaria, cholera and skin diseases such as scabies.

“Skin diseases are the main problem here because of dirty, stagnant water and unhygienic conditions,” said Sajjad Memon, one of the doctors at the clinic, which is run by the charity Alkhidmat Foundation.

He used the flashlight on his mobile phone to examine patients, who were mostly reporting scabs and rashes on Tuesday.

Many had made their way to the clinic walking barefoot through filthy floodwater and mud.

“My child’s foot is burning with pain. My feet too,” said Azra Bhambro, a 23-year-old woman who had come to the clinic for help.

Abdul Aziz, a doctor in charge of Alkhidmat’s clinics in the area, told AFP that cases of scabies and fungal infections were on the rise.

Scabies outbreaks are common in crowded places with tropical conditions — such as flood relief camps and shelters — and can lead to severe itching and rashes, according to the World Health Organization.

Memon told AFP that many of the patients at the clinic could not afford to purchase shoes.

The millions of people affected by the floods face major health hazards including potentially deadly diseases such as malaria and dengue fever, the WHO warned in a statement Tuesday.

Sindh province, in Pakistan’s south, has been hit particularly hard, with vast swathes of land under water and many villagers forced to head to large cities for shelter, food aid and medical assistance.

The health threat is even greater in areas such as Bhambro, where health services were already limited, and for the tens of thousands who are taking shelter in crowded relief camps.

“Ongoing disease outbreaks in Pakistan, including acute watery diarrhoea, dengue fever, malaria, polio, and Covid-19 are being further aggravated, particularly in camps and where water and sanitation facilities have been damaged,” the WHO said.