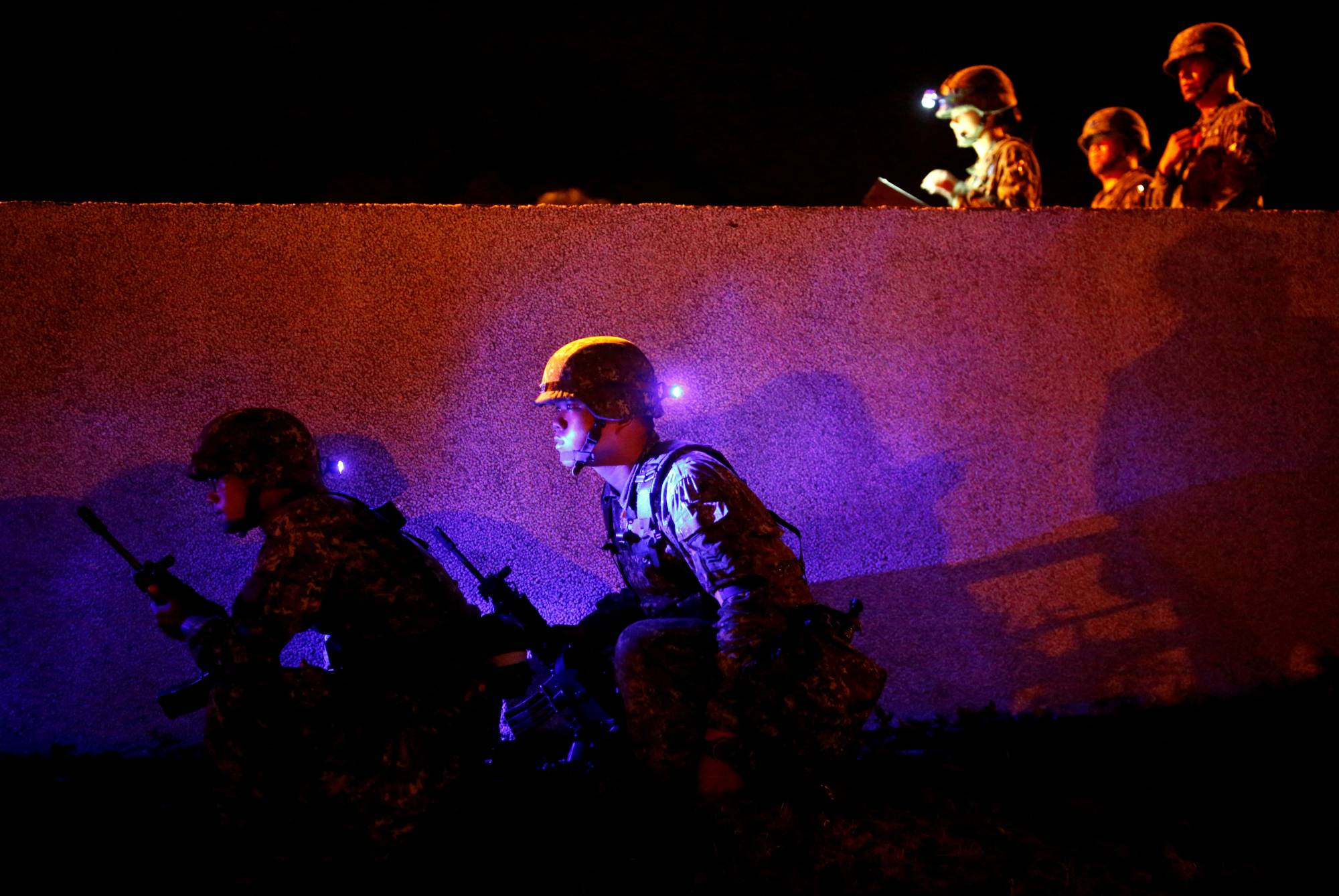 For more than 20 years, Xie Xizhang presented himself as a Hong Kong businessman on visits to Taiwan. He now stands accused of having another mission: recruiting spies for China.

On one trip in 2006, Xie met a senior retired Taiwanese navy officer, Chang Pei-ning, over a meal, according to official documents accusing the pair of espionage. Chang would become one of Xie’s agents, the documents allege, helping him penetrate Taiwan’s active military leadership as part of a long-running Chinese operation to build a spy ring among serving and retired military officers.

The Taiwanese officers and their families were allegedly lured by Xie’s offers of all-expenses-paid trips abroad, thousands of dollars in cash payments and gifts such as silk scarves and belts for their wives. In June 2019, counterespionage officers moved against Xie’s network, launching raids that uncovered further evidence, according to the documents, which were reviewed by Reuters. Now, Chang is facing espionage charges and a warrant has been issued for the arrest of Xie. According to a person familiar with the case, Xie is not in Taiwan.

The operation detailed in these documents shows how Beijing allegedly sought out commanders in the Taiwan military and induced them to become spies. It comes amid a series of convictions for military espionage in Taiwan in recent years.

Those cases reveal that China has mounted a broader campaign to undermine the democratic island’s military and civilian leadership, corrode its will to fight, extract details of high-tech weapons and gain insights into defense planning, according to senior retired Taiwanese military officers and current counterespionage agents, as well as former U.S. military and intelligence officers with experience in Taiwan.

Taiwan’s spy catchers are battling a campaign that has compromised senior officers at the heart of the island’s armed forces and government agencies, a steady stream of convictions handed down in the courts shows.

Beijing has even penetrated the security detail assigned to protect Taiwan President Tsai Ing-wen. A retired presidential security officer and a serving military police lieutenant colonel at the unit tasked with protecting the Taiwanese leader had their conviction upheld earlier this year for leaking sensitive information about Tsai’s security to a Chinese intelligence agency.

The information included a hand-drawn organizational chart of the Special Service Center, the unit that protects the president, according to the ruling in the High Court. The two were also charged with leaking the names, titles and work phone numbers of senior security officers guarding the Presidential Office and Tsai’s residence in the heart of Taipei, according to court documents reviewed by Reuters and local media reports.

In the past decade, at least 21 serving or retired Taiwanese officers with the rank of captain or above have been convicted of spying for China, according to a Reuters review of court records and reports from Taiwan’s official news agencies. At least nine other serving or retired members of the armed forces are currently on trial or being investigated on suspicion of contacts with spies from China, the review shows.

The 21 convicted officers were found guilty of recruiting spies for China or passing a range of sensitive information to China, including contact details of senior Taiwanese officers and details of Taiwan’s agents in China.

The Taiwan Affairs Office in Beijing did not respond to questions about China’s espionage activities in Taiwan.

In Taipei, the Ministry of National Defense said that proactive counterintelligence efforts have stopped China from penetrating the military. The ministry said in a statement that it employs education campaigns to encourage and reward officers and soldiers to report initial contact with “criminals.” These contacts are immediately investigated, and when there is potential for the loss of confidential information, the military acts to block any leak, the ministry said.

This effort, the ministry said, means “there has been no infiltration.”

The Ministry of Justice Investigation Bureau, Taiwan’s lead spy catching agency, said it had no comment on ongoing legal matters.

Other arms of the Taiwanese government, however, greet the spying with alarm. Taiwan’s Mainland Affairs Council said in a statement that China’s “unceasing expansion of espionage” is one of the “malicious political operations” that Beijing is conducting, undermining “the normal development of cross-strait relations.”

Well-placed spies in the ranks of the Taiwan military could offer a priceless advantage to China if the two sides plunge into open conflict, according to Taiwanese and U.S. military analysts.

Tensions have risen sharply this year. China’s military is intensifying its gray-zone warfare against the island, a campaign of menacing air and sea patrols that falls short of open warfare. The People’s Liberation Army is also steadily accumulating the firepower required to seize Taiwan and prevent the United States from intervening.

The ruling Communist Party in Beijing regards Taiwan as a Chinese province that must be unified with the mainland. President Xi Jinping says China would prefer peaceful unification but refuses to rule out force. Tsai says Taiwan is an independent country called the Republic of China, its official name, and has vowed to defend its democracy and freedom.

Lu, who has studied Chinese spying operations, said Beijing’s agents often begin softening their targets with offers of small gifts, drinks and meals. Handlers typically pay richly for the first piece of secret information extracted from current or retired officers, Lu said. This payment would later be used to blackmail them into supplying further intelligence at a much lower price, he said.

This year alone, Taiwanese courts have upheld the convictions of the two men who revealed secrets about Tsai’s security and found a retired lieutenant colonel from the armaments bureau guilty of building espionage networks for China. A retired major general and three retired colonels from the Military Intelligence Bureau are on trial for allegedly recruiting spies for China. Reuters was unable to reach the defendants and their lawyers in these cases for comment.

Three people familiar with the matter confirmed a probe is under way. Two of the people said that Chang was being questioned for having had contacts with Xie — the alleged Chinese agent who presented himself as a Hong Kong businessman. The defense ministry said Chang had been interviewed as a witness in the case.

According to the official documents reviewed, Xie allegedly reported to an office that is part of the Chinese Communist Party’s intelligence apparatus and serves as a front for China’s Central Military Commission. Xi chairs the commission, which is China’s top military decision-making body.

Chang, Taiwan’s highest-ranking air force general, is now head of the National Defense University. When the media reports of the probe emerged, Chang issued a statement calling them “far-fetched.” He said he had “not talked about military matters without permission.”

Espionage has long been a powerful weapon for the Chinese Communist Party. In the Chinese civil war, Communist agents and sympathizers played a key role in defeating the forces of the ruling Kuomintang (KMT), or nationalist party, under Chiang Kai-shek, forcing a retreat to Taiwan. In some instances, entire KMT formations were persuaded to change sides and joined the Communists under Mao Zedong, according to multiple accounts of that conflict.

The series of convictions in Taiwanese courts shows cultivating disloyalty in the military remains a high priority for Beijing. Despite China’s vastly stronger forces and serious shortcomings in Taiwan’s military, the island remains a tough target for invasion. Even without outside assistance, Taiwan’s best-trained troops could inflict heavy losses by exploiting well-prepared positions, rugged terrain and the vulnerability of an invasion fleet crossing the Taiwan Strait, say Taiwanese and U.S. military analysts.

For Chinese invaders, advance knowledge of defensive plans, communication codes, weapons sites and troop locations would offset some of these difficulties, according to these analysts. Disloyal officers might also refuse to fight, misdirect their troops or defect to the attackers.

In a report released in September about the Chinese military, Taiwan’s defense ministry acknowledged that in an attack, agents for China “lurking” on the island could strike at command centers to “decapitate” Taiwan’s military and political leadership and demoralize its armed forces.

Even the discovery of Chinese spies in peacetime is a potentially demoralizing blow to Taiwan. “The repeated cases of the most senior level of Taiwan armed forces officers being convicted of espionage has got to have a psychological effect on the officer corps and in the ranks,” said Grant Newsham, a retired U.S. Marine Corps colonel who has studied the island’s defense capabilities. “And, once you can create doubt in the honesty of one’s leaders, the rot sets in and deepens.”

Beijing has succeeded in recruiting spies from the island’s armed forces despite strenuous efforts by the Taiwanese military’s Counter Intelligence and Security Division to alert troops to the danger of Chinese agents. The military even produces soap operas, sometimes starring serving members of the armed forces, with scripts that echo previous spy cases. The soaps are part of an hourlong television program broadcast every Thursday afternoon that is mandatory viewing for all serving officers and soldiers.

In an episode late last year, a staff sergeant working in communications in a combat unit meets a woman in a bar who claims to work for an investment firm in the defense industry. They start a relationship and the woman begins to ask for sensitive information. To impress her, the staff sergeant gives her data on missiles at air bases in northern Taiwan. Later he grows suspicious and refuses her further requests, but she threatens to blackmail him with a recording of his earlier indiscretion. The woman is later arrested.

The scene switches to a man who appears to be the woman’s spymaster. On the wall in front of him are clips from Chinese newspapers, including a photograph of Xi. “That’s alright,” the handler says, tearing up a photograph of the woman. “We have plenty of other opportunities.”

To reinforce the message, posters and signs on bases exhort Taiwanese soldiers to remain vigilant. Stickers with the number of a hotline for reporting suspected spies have been posted above some urinals. Packs of tissues handed out to troops carry a notice promising a reward of 5 million New Taiwan dollars ($180,000) for successfully exposing a spy.