Centenary Celebration Euphoria For the Communist Elite of CPC 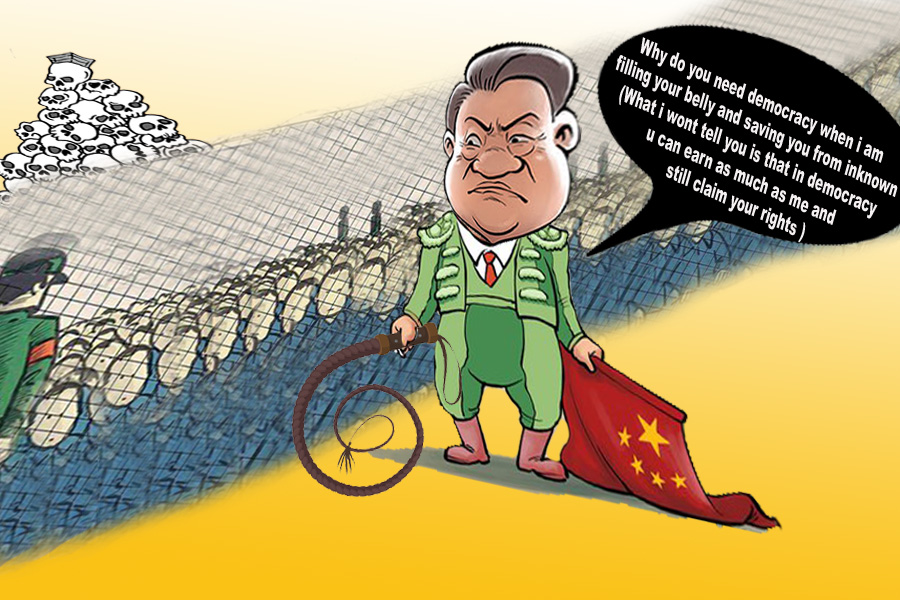 The World and China’s own citizens ponder, while Xi Jinping, general secretary of the Communist Party of China (CPC) Central Committee is attending a ceremony celebrating the CPC centenary at Tian’anmen Square in Beijing, of what symbolic and moral message the grand however equally brutish and megalomaniac party wants to convey, by celebrating the Oppressive Party’s successful completion of 100 years, in the same location where Tiananmen Square Massacre: a purge was put into action by the Communist Elites of CPC to quell the ’89 Democracy Movement.

Is it to convey, that the Centenary celebration is jubilation, against the murder of several thousands who demonstrated in quest for their democratic rights?

Is it to convey a subtle message to the dissidents existing, of the Despotic might and infallibility of the fitful CPC, against the basic freedom every heart and soul in China so desires?

History of China has seen CPC conditioning its leadership to effect corruption and dynastic politics and hide the same by a regime to oppress their own people, generally repress the truth, and create a world that they define for themselves and their personal dynastic wealth, while erasing, silencing, or bribing everything and everyone else.

They treat their own citizens like herd cattle and their legal system like a Lego set, reshaping it to accomplish whatever the campaign of the moment requires, to satisfy their personal needs and wealth, and tighten control over lives of people through the monster called CPC, in the name of Communism.

They treat everything which is humane and a celebration of human spirit i.e. art, academia, the cultural and dynastic political evolution of their country, the way they treat the Three Gorges, as something to be dammed with a massive government organized, propaganda-laden humanist-scientist engineering project, regardless of who or what gets drowned, regardless of the fault lines, and regardless of dissenting expert opinion.

It is the height of hubris and any student of human civilization cannot help but see it as this bitterly ironic, massive tragedy in the making.

They exist on totalitarian logic of the erstwhile Brute of human Chinese regressive emperors and regimes of medieval “Yellow River Basin China” (it is the verdict of history and obtuse destiny that we are in power; we also control the history books, the internet, and all aspects of education and the manner of thinking, living, and existence of each human on he Planet), have no real vision for the country, and have nothing to truly offer their people or the rest of the world beyond money and fear.

Since the time CPC has existed in China, how many innovations worthy of benefiting the world race, have originated in China? This includes CPC rule and the rules of despotic emperors of medieval China, and the answer remains Nil.

And they have ensured that every currently conceivable political alternative is crushed; the circular logic of authoritarianism and totalitarianism, which has resulted in ease of Corruption at the largest scale, while there is just minute increase in quality of life for the common citizen, that too of only 2% of the population.

The CCP is a liar. When the CCP did not gain power, the CCP boasted that it would give the people the right to democracy and deceived intellectuals with this slogan. After they obtained the power, they cleaned and persecuted the intellectuals and democrats. The CCP never thought about it. In fulfilling his commitment, Mao Zedong’s own words were “Monks are holding umbrellas and lawlessness.” Nowadays, the National People’s Congress, the Chinese People’s Political Consultative Conference, and the laws are all counterfeit.

The CCP is a thief. The CCP monopolizes all resources in China, and even the Chinese are their slave resources. During the Maoze era, the CCP cruelly exploited peasants through the hukou system, and in the “reform and opening up” era, let the capitalists exploit the labor and consumers and enjoy their success.

The CCP is a vampire and hinders China’s development. The party organizations and vassals that China uses to share national resources to nourish it includes so-called “state-owned enterprises”, “institutions”, etc. These departments have extremely poor economic efficiency but enjoy privileges, which is essentially a vassal group cultivated by the CCP. These groups enjoy Privileges interfere with the normal operation of the economy and exploit the wealth of the Chinese people through various methods.

CCP’s culture pays attention to “Party spirit is higher than human nature”, “Father and mother are not as good as party members.”. The CCP does not believe in communism at all, just a rogue clique. No matter what they say, the manner of communism reeks of their staunch belief in the dictatorship of the feudal era.

From the standpoint of China’s nationalism, the CCP is a traitor. The CCP has always ranked the “Party” in front of the “State”,  the CCP would rather starve the Chinese to the point of exporting revolutions, inter-Republican capitalist peace.

Sadly, CPC  is very incompetent at running the country. They are accustomed to “one-size-all” by powerful order, and under MAO Zedong: they believed in crude planned economy, the great famine, poverty and various humanitarian disasters, and Chinese people have been living in a very poor standard of living. In the so-called “reform and opening”, it is just the nature of the Chinese communist party is no longer so crazy meddling in the economic development, but as long as involved in public service, the communist party of China (the government service quality is poor, and so-called China’s economic development, but is extensively through power exploitation of rural areas and to provide for a handful of urban areas(2% of the Chinese population

Factually speaking, the CCP is a dictatorship, and crimes against humanity have not been prosecuted. Sadly, in China, because of historical reasons, many Chinese people’s personalities are humble, they feel grateful to the ruler as long as they live better, and the CCP spends a lot of money every year to train propagandists for brainwashing education.

This celebration, in the very place CPC murdered scores in 1989, is a shameless example of such.