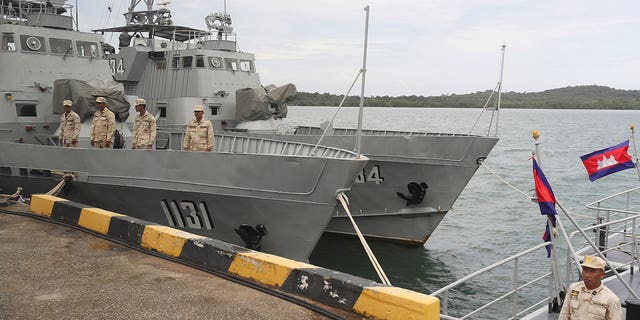 Chinese and Cambodian officials broke ground Wednesday on a contentious naval port expansion project, dismissing American concerns it could provide Beijing with a strategically important military outpost on the Gulf of Thailand.

Cambodian Defense Minister Tea Banh, Chinese Ambassador to Cambodia Wang Wentian, and other officials donned white gloves before turning over shovels full of dirt to launch the official “modernization” of the Ream Naval Base, which will include a dry dock for ship repairs, an extended pier, a hospital, a workshop, and a “reception building.” Longtime authoritarian leader Hun Sen 2019 reportedly granted China the right to set up a military base at Ream but has long denied that, saying Cambodia’s Constitution prohibits foreign military facilities.

Dredging is already underway to allow larger ships to use the port. Tea Banh told guests, including the U.S. defense attache, that it would still only be able to accommodate ships of up to 5,000 tons displacement – an improvement from the current 1,000 tons but too shallow for all but the smallest of naval ships.

“Please don’t be too worried about this Ream base,” Tea Banh said, speaking in front of a sign proclaiming the project is being funded by “grant aid from the People’s Republic of China.” “This port is too small and even after upgrading it can’t be a port that would threaten any countries,” he said.

Tea Banh said he invited the U.S. and other foreign representatives to the base so they could see for themselves “there is nothing here,” though he added that once construction is complete the facility will become a restricted military zone with no access for foreign nations.

Following the ceremony, the U.S. Embassy in Phnom Penh reiterated American concerns that a Chinese “military presence at Ream could threaten Cambodia’s autonomy and undermine regional security.” “The U.S. and countries in the region have expressed concern about the lack of transparency on the intent, nature, and scope of this project as well as the role the PRC military is playing in its construction and in post-construction use of the facility,” embassy spokesperson Stephanie Arzate said in an email to The Associated Press.