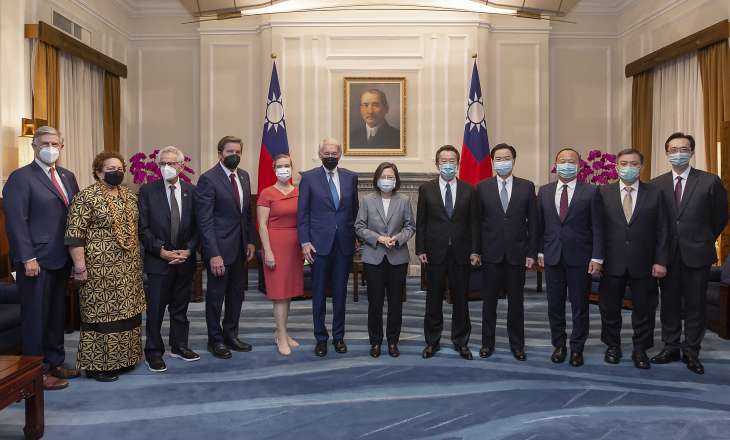 China resorted to more high-intensity military drills around Taiwan on Monday to “safeguard national sovereignty” as Taiwan’s president met with members of a new US congressional delegation visiting the self-ruled island claimed by Beijing, challenging its ‘one China’ policy.

The new drills come less than a fortnight after Beijing launched unprecedented war games in retaliation to US House Speaker Pelosi’s visit to Taiwan, sparking fears of a Chinese invasion of the breakaway island.

The US Congressional delegation led by Massachusetts Democratic Senator Ed Markey arrived in Taipei on an unannounced two-day visit on Sunday, close on the heels of Pelosi’s visit on August 2, the highest-level visit by US official in 25 years, which riled Beijing.

The five-member delegation is visiting the self-governing island to “reaffirm the United States’ support for Taiwan” and “will encourage stability and peace across the Taiwan Strait,” a spokesperson for Markey said in a statement.

On Monday, China announced yet another round of military drills in retaliation to the visit by another US delegation.

Senior Colonel Shi Yi, the spokesperson for the Eastern Theater Command of the Chinese People’s Liberation Army (PLA), said that his Command has organised joint combat-readiness security patrol and combat training exercises involving troops of multiple services and arms in waters and airspace around Taiwan Island on Monday.

According to Shi, this is a solemn deterrent to the United States and the Taiwan authorities, which have repeatedly played political tricks and undermined peace and stability in the Taiwan Straits, a PLA press release said.

The troops’ Command will take “all necessary measures to firmly safeguard China’s national sovereignty and the peace and stability in the Taiwan Straits,” it said. Taiwan’s Defence Ministry on Monday condemned the PLA for jeopardising the peace and security of the surrounding region with announcements of military drills.

“As PLA Eastern Theater announced a joint combat patrol mission, #ROCArmedForces detected 5 PLAN vessels and 30 PLA aircraft today until 1700(GMT+8). 15 of the detected aircraft had flown on the east part of the median line of the Taiwan Strait, flight paths as illustrated,” he said

The group led by Markey met with Taiwan’s President Tsai Ing-wen on Monday. Reacting to the US Congressional delegation, Chinese Foreign Ministry spokesman Wang Wenbin told a media briefing that it is a gross violation of the ‘one China’ policy.

The US delegation, in disregard of China’s serious demarches and firm opposition, insisted on visiting the Taiwan region of China, Chinese Foreign Ministry spokesman Wang Wenbin told a media briefing here on Monday.

It is a blatant violation of the one-China principle and the stipulations of three China-US joint communiqués. It also infringes on China’s sovereignty and territorial integrity and sends a wrong signal to the “Taiwan independence” separatist forces,” he said.

Associating themselves with the separatists in Taiwan and attempting to challenge the one-China principle is a misjudgement and will get these small numbers of US politicians nowhere, Wang said.

In another fiery statement, Senior Colonel Wu Qian, spokesperson for the Chinese Ministry of National Defence, said that the US Congressional delegation’s visit fully revealed that “the US is the true spoiler and saboteur of peace and stability in the Taiwan Strait”.

In response, the Eastern Theatre Command of the PLA has organised joint combat-readiness security patrol and combat drills involving troops of multiple services and arms in the waters and airspace around the Taiwan Island, which represents the strong hit back and solemn deterrent against the collusion and provocations of the US and the Taiwan authorities, he said in a statement.

“Taiwan is part of China, and the Taiwan question does not brook any external interference,” he said.

“We sternly warn the US side and the (Taiwan’s ruling) Democratic Progressive Party (DPP) authorities that to contain China with Taiwan is doomed to fail, and to solicit the US for independence is bound to bring self-destruction,” Wu said.

“The Chinese PLA continues the military training for war-preparedness to firmly safeguard China’s national sovereignty and territorial integrity and resolutely smash any form of the ‘Taiwan independence’ separatist schemes and interference attempts by external forces,” he said.

The US delegation members will also meet Foreign Minister Joseph Wu during the visit, and will hold discussions with the Taiwanese parliament’s Foreign Affairs and National Defence committee on security and trade issues, Taiwan’s Ministry of Foreign Affairs said.

The Taiwanese foreign ministry added that it sincerely welcomed the delegation, and thanked them for demonstrating the US’ strong support toward Taiwan despite escalating tensions with Beijing.

Markey’s spokesperson said the delegation “will meet with elected leaders and members of the private sector to discuss shared interests including reducing tensions in the Taiwan Strait and expanding economic cooperation, including investments in semiconductors.” After Pelosi’s visit, China is concerned that there will be a flurry of visits by top officials from the US and allied countries.