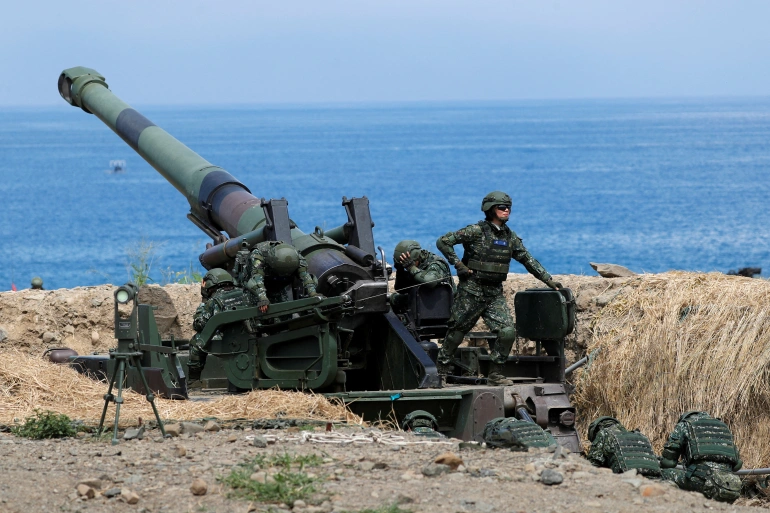 The Chinese military has said it conducted a “combat readiness patrol” in the sea and airspace around the self-ruled island of Taiwan, which China claims as its own territory.

In a statement, the People’s Liberation Army Eastern Theatre Command said the exercises had taken place in recent days and were “a necessary action” against what it described as “US-Taiwan collusion”.

“Recently, the United States has frequently made moves on the Taiwan issue, saying one thing and doing another, instigating support for Taiwan independence forces, which will push Taiwan into a dangerous situation,” the command added in a statement on Wednesday.

Taiwan this week reported the largest incursion by Chinese aircraft into its Air Defence Identification Zone (ADIZ) since January with 30 planes, most of them fighter jets, entering the southwest of the ADIZ.

The incident took place as Tammy Duckworth, a US Senator, was visiting the island.

Foreign Ministry spokesperson Zhao Lijian said that Beijing had “lodged solemn representations” with the US about her visit.

“We urge relevant US politicians to earnestly abide by the one-China principle, and immediately stop official exchanges with Taiwan in any form and refrain from sending any wrong signals to the ‘Taiwan independence’ separatist forces,” Zhao told a press briefing on Tuesday afternoon, according to the state-run Global Times.

Zhu Fenglian, spokesperson for the Taiwan Affairs Office of the State Council, a Beijing body, also warned in a press conference that it was “very dangerous” for the US to “connive in the separatist activities conducted by Taiwan secessionists”.

Known formally as the Republic of China (ROC), Taiwan lies about 161 kilometres (100 miles) off the coast of mainland China. Once colonised by Japan, Chinese nationalists fled to the island after losing the civil war to the communists who established the People’s Republic of China (PRC) in Beijing.

The ROC continued to claim to represent all of China and even had a seat on the United Nations Security Council until 1971 when most countries, including the US, began to switch diplomatic recognition to Beijing instead of Taipei.

Since then, the US, under the Taiwan Relations Act, has been mandated to “preserve and promote extensive, close and friendly commercial, cultural, and other relations between the people of the United States and the people of Taiwan”.