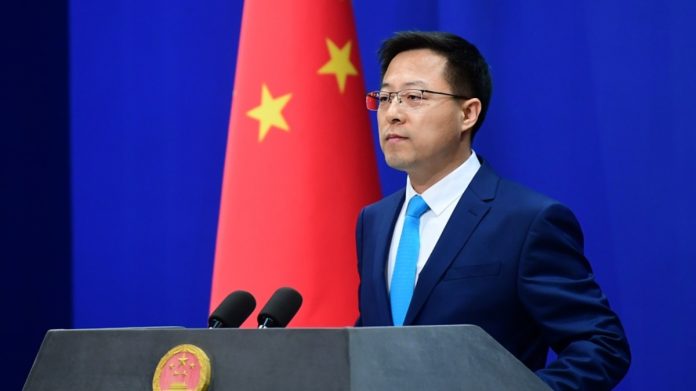 The Chinese Foreign Ministry has doubled down on accusations the US is the home of “racism and white supremacy” amid China’s ongoing genocidal campaign against the Uyghur ethnic group.

Chinese Foreign Ministry spokeman Zhao Lijian, infamous for tweeting a deeply offensive doctored image of an Australian soldier, made the comments amid questions about the UN’s Durban Declaration and Programme of Action.

Speaking on the 20th anniversary of the World Conference Against Racism, Racial Discrimination, Xenophobia, and Related Intolerance – which produced the Durban Declaration – Mr Zhao put some of the failure to fully eliminate racism at the feet of the United States.

“Due to the inaction and botched performance of a few countries including the United States, the international community still has a long way to go to eliminate racism, racial discrimination, xenophobia and related intolerance.”

He went on to claim “racism and white supremacy are still spreading in the US” and said this had “again torn to pieces the US disguise of ‘equality’ and ‘freedom'”.

The US State Department has estimated as many as two million Uyghurs and other ethnic groups have been detained in Xinjiang since 2017.

In March 2021, the State Department published the 2020 Human Rights Record which confirmed the department’s view that the atrocities against the Uyghurs were “genocide and crimes against humanity”.

Among a long list of human rights violations, the record listed “the mass detention of more than one million Uyghurs and other members of predominantly Muslim minority groups in extrajudicial internment camps and an additional two million subjected to daytime-only ‘re-education’ training”

It also outlined China’s policy of “severe restrictions and suppression of religious freedom; substantial restrictions on freedom of movement; … forced sterilization and coerced abortions; forced labor and trafficking in persons.”

An earlier pronouncement in April from the Chinese Foreign Ministry declared the allegations of genocide to be “the most preposterous lie of the century, an outrageous insult and affront to the Chinese people, and a gross breach of international law and basic norms governing international relations.”

However, testimony from former detainees describe a network of internment camps scattered throughout far-western China in which they were placed in overcrowded cells, and subject to torture.

Some also report witnessing the deaths of detainees.