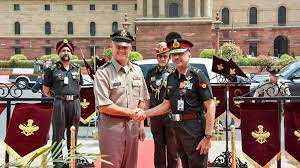 China said top US general Charles A Flynn’s comment that he was “alarmed” by the Chinese build-up along the border with India was a “despicable act” and an effort to “add fuel to fire” to the dispute between the two Himalayan neighbours.

Beijing and New Delhi have the will and capability to properly resolve their differences over the boundary through talks and consultations, Chinese foreign ministry’s spokesperson, Zhao Lijian said.

Zhao was responding to a question on US Army’s Pacific Commanding General Flynn’s comments on the situation along the Sino-India border in New Delhi on Wednesday.

Flynn was referring to the ongoing military tension between India and China in eastern Ladakh.

The Chinese foreign ministry’s Zhao lashed out at the US general for commenting on the tension.

“This border issue is between China and India (and) the two sides have the will and capability to properly resolve the issue through talks,” Zhao said on Thursday.

Zhao said: “Some US officials are trying to add fuel to the fire and pointing fingers. This is a despicable act. We hope they will do more to contribute to regional peace and stability.”

Zhao said the situation in eastern Ladakh where the two sides are locked in an ongoing standoff for more than two years is “stabilising”.

“Now the situation there is stabilising on the whole and the frontline forces from both countries have realised disengagement in most areas along the western section,” Zhao said.

Speaking to a group of reporters in New Delhi, Flynn said: “The [Chinese] activity level is eye-opening. Some of the infrastructure being created in the PLA’s Western Theatre Command is alarming. One has to ask the question ‘why’, and get a response as to what are their intentions.”

“I think it is worthy of us working together as a counterweight to some of those corrosive and corruptive behaviours that the Chinese do,” he said.

Indian and Chinese troops have been locked in a tense border standoff in eastern Ladakh since May, 2020, which led to a violent clash between the two sides in Galwan Valley in June that year.

Last month, it emerged that China is constructing a second bridge in an area held by it around the strategically key Pangong lake in eastern Ladakh and this could help its military to quickly mobilise its troops in the region.