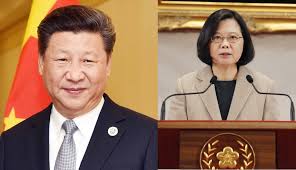 China has denounced Taiwan’s national day speech, during which President Tsai Ing-wen said her government will not bow down to pressure from Beijing and will continue to bolster the island’s defences in order to protect its democratic way of life.

“No one should underestimate the Chinese people’s strong determination, will and capability to safeguard national sovereignty and territorial integrity,” Xi had said.

Speaking earlier on Sunday, Tsai said Taiwan will keep bolstering its defences to ensure nobody can force the island to accept the path China has laid down, offering neither freedom nor democracy, and repeated a call for talks with Beijing.

Speaking in central Taipei at the island’s national day celebrations, which included a rare show of Taiwanese defence capabilities, Tsai said her government will not “act rashly” but “there should be absolutely no illusions that the Taiwanese people will bow to pressure”.

The speech was followed by the parading of a range of weaponry, including missile launchers and armoured vehicles, while fighter jets and helicopters soared overhead.