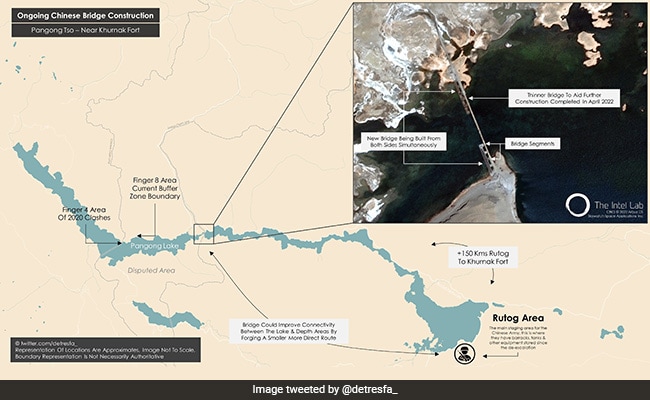 The Line of Actual Control (LAC) around eastern Ladakh was the subject of renewed focus Monday, as satellite imagery showed that China has constructed a new radome structure near the disputed Finger 4 and Finger 8 areas around Pangong Tso lake.

Damien Symon, a satellite imagery expert who tweets from the handle @defestra_, shared the new information on Twitter.

Radomes are large dome-shaped structures that protect radars from bad weather while simultaneously allowing electromagnetic signals to be received without any distortion.

Symon further claimed that the images show under-construction solar panels and a proposed radar viewshed that “allows for monitoring across highlighted terrain and lake sections”.

The developments come two years after the Sino-Indian standoff had broken out in May 2020 in the Eastern Ladakh region around Pangong Tso.

India and China had mutually agreed to disengage from the region early last year and return to the status quo, leading to numerous rounds of talks between the two sides over the disputed border areas, particularly Finger 4 where the standoff had taken place.

However, in January this year, ThePrint reported that China was building a bridge across the Pangong Tso lake on its side of the LAC in a possible move to “counter” Indian army operations.

It was also reported while the standoff was still ongoing between September 2020 and mid-2021, the Chinese had managed to build a new road to the Moldo garrison to circumvent the visibility arc of the Indian soldiers and equipment on top of advantageous heights.

In May, ThePrint reported that China was building a second bridge at Pangong Tso that was said to be “bigger, broader” and capable of carrying armoured columns.

The new radome structure, the potential solar panels as well as the Pangong Tso bridge form part of broader infrastructural development efforts by China along the LAC — not only amid the standoff but also after the disengagement process had been completed in February 2021.