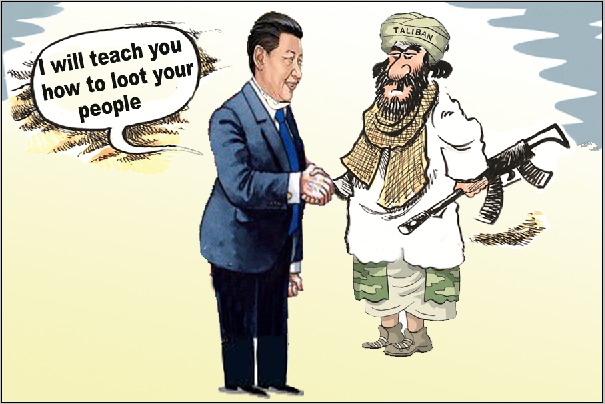 The Taliban has said, it sees China as a “friend” of Afghanistan and assured Beijing that it would not host Uyghur Islamic fighters from the genocide being conducted by China in East Turkestan (Xinjiang province in Chinese occupied territories).

Taliban spokesman Suhail Shaheen had said that they are hoping to talk to Beijing about investing in reconstruction work “as soon as possible”.

The china-Taliban love story seems to be blooming along the Khyber Pass, and very aptly this courtship is superintended by Imran Khan-Bajwa combine.

How did it come to be, that China, which is conducting genocide of Uyghur Muslims in East Turkestan appears like an angel to the Taliban? How reeducation camp of Uyghur Muslims, of denying the right to pray, practice religion and forced by China into un-Islamic practices: nearly an assault on the Prophet’s way of life and Islam’s basic ideology, yet is viewed mildly by the Taliban. The same Taliban who broadcasts imposition of the strictest Sharia law upon citizens of Afghanistan and murder them openly for violation of the same.

This paradoxical yet enigmatic alliance has a secret sinister cocktail ingredient called Pakistan, the ever so available courtesan at the beck and call of Xi Jinping, to muster other available love interests in the region.

Chinese Debt Trap is a good Scheme for the Corrupt

Essentially, China lends this money in order to gain a strategic presence in these countries. In some cases, they take natural resources (rare minerals) as payment to fuel their growing industry. Once the countries default on these excessive interest rates, the trap closes and China starts making demands (on behalf of supposedly private companies, who are essentially all state-owned).

As an example, Tonga took a loan in 2006 and defaulted on it in 2013 as the Chinese bank refused to forgive the debt. At the time, the interest rates of that loan made up 44% of Tonga’s GDP. Read that again: Almost half the country’s income was used to repay the loan.

In Zimbabwe, the Chinese were given coal mining claims in Hwange National Park, the biggest National Park in Zimbabwe. The public had to protest on social media until the mining licenses were suspended. Imagine destroying their Great Wall because you want to mine something? This is what they wanted to do in Zimbabwe. Overall, the world has seen more exploitation than development. Recently in Africa,  a Chinese national shot deads a local man for simply demanding the wages that he worked for.

The Chinese are causing harm to Africa due to the mindless ruling class with a huge appetite for stealing and getting bribed from China. Be it despots or the militia corroborators, they steal so much money from the public like there is no tomorrow.

Doesn’t China like such a place to park its resources, to encash sometime later?

That is already happening in the South of America already. The lopsided nature of China-Latin America trade is also questioned because it has not been so beneficial in developmental quality. Commodity suppliers are doubtful at the Chinese consumption for their raw material exports at such throwaway prices, and manufacturers complain of a flood of cheap Chinese imports that undermine their competitiveness.

It smells a rat, right from El Salvador’s president announcing that China had agreed to “gigantic, non-refundable cooperation” with his country, investing an undisclosed amount, to the other shady deals like China’s deal to build a road across the country in return for rights to “thousands of acres” of land bordering the road and “the ability to control the tolls on that road for the next 99 years.”

A fleet of more than 300 Fishing Pirate Chinese-flagged ships had caused consternation among the governments of Ecuador and Peru in the last three years, when they have been caught fishing around their respective exclusive economic zones, and even scaring off the local fishing boats. Behaving as a fishing mafia, they continued to fish in the Pacific Ocean around South America, and affected countries are helpless, due to their governments already bound by the shady Belt and Road Initiative (BRI) agreements and bribes.

China dumps its sub-standard military equipment to these countries, in return for bribes is known to all. In 2019, Venezuela was arm twisted to purchase Chinese-made JY-27A long-range air defense radars. Beyond aircraft and radars, Venezuela has also acquired Chinese military ground vehicles, both for its Naval Infantry and its National Guard, including VN-4 armored personnel carriers.

Ecuador also fell into the trap, wherein Chinese MA-60 transport aircraft and Chinese CETC air defense radars became the subject of a legal dispute as the radars’ performance in aerial coverage did not meet the Ecuadoran Air Force’s requirements.

It’s a known fact, that Chinese arms do not find favor even with its die-hard ally Pakistan, what is stopping the Chinese to pass off its military junk to Afghanistan, in lieu of gobbling up the mineral wealth of Afghanistan?

Infrastructure projects are important but mainly serve Chinese companies. There is a highway or a rail to and from a Chinese-owned mine with Chinese workers, but not much else. The world doesn’t see how poor Africans and now Afghanis shall gain from this.

The infrastructure is built by Chinese workers. Do they even transfer the knowledge to locals on how to maintain those?

Are there any vocational schools being opened in Africa by China to train locals to do the jobs or does China send in Chinese people?

No, they want a recurring debt, owed to them by the colonized country.

The story is grim, as in these susceptible countries China is buying land from the government without the consent of the small farmers and shepherds who have been using the land for millennia.

Worse shall be in store for Afghans, as there are Nil land ownership records, except for those who wield the gun.Video Player00:0000:49

When China’s own population doesn’t have rights over land, how will Afghans claim rights, when facing the barrel of the gun of a Terrorist, who stands there in the name of religion. Oppression shall be a hundred times what a Han Chinese citizen faces in their own country, to cater for the rich CPC communist party ranking officials.

The difference between western money and Chinese money is that the Chinese don’t expect open and fair elections or require anti-corruption. It is 10 times more convenient for a government that doesn’t care about these things to fight them. Whether the western countries are too strict or whether China is funding tyrants is yet to be determined in my opinion.

In the short term, these countries get a boost in infrastructure, low-interest loans, and hope: just like what is happening in Pakistan.

In the long term, however, they’re being robbed. Their natural resources are being plundered, sent to China, and then resold to them in the form of finished goods. China gets unfettered access to precious resources and then gets to resell all of their goods back to that country, without much competition.

The whole “Belt & Road” initiative China’s doing is basically the natural extension of a long process of dumping Chinese steel production into something that can be seen as a productive expansion of Chinese GDP with little to no tangible benefit beyond keeping Chinese people employed and a near-meaningless statistic bumped up for national pride.

China is buying up land at a staggering pace, which means poor and starving landowners are forced to sell their lands for a pittance, enough only to sustain them for a few months, but robbing them forever of their most valuable (and only) possession.

China mostly invests in projects that allow it to rapaciously plunder natural resources in these countries. Because these projects are executed on loan from China, most governments have no say in how they are executed.

The interest rates on these loans are prohibitive, but because most of these countries are dictatorships where people have no say and the dictators are heavily bribed, there is no transparency and opposition from the common man.

It also brings its own workforce from back home, thereby denying locals employment in any of these projects. And once the host countries realize there is no way they can repay these loans, China converts these debts into equity and takes ownership of these projects.

Locals are often used only as labor force, while Mandarin learning is becoming the order of the day in such countries, even for such lowly daily wages jobs. China has been pursuing ‘conquest through purchase’ for 49/99 years lease; while they are ensuring and insisting thereby, that the official language of the New World Order is Mandarin.

This is the story of Africas and South Americas. Imagine how worse can the loot be, wherein in Afghanistan, questions can’t even be asked. One doesn’t know, in return for bribes, what blasphemy charge will be leveled against you and the next moment you see that Afghani losing his head in no time: no trial no judge.

Hu Jintao said one time “We’re not concerned about politics, we’re concerned about business.” Most countries just simply won’t deal with some oppressive regimes and Terrorists.

CPC and Communist China definitely shall, unabashedly. Is Pakistan Army now putting up Afghanistan also for sale after Pakistan, through their proxy: the Taliban?