China may have committed ‘crimes against humanity’ in Xinjiang, UN report finds 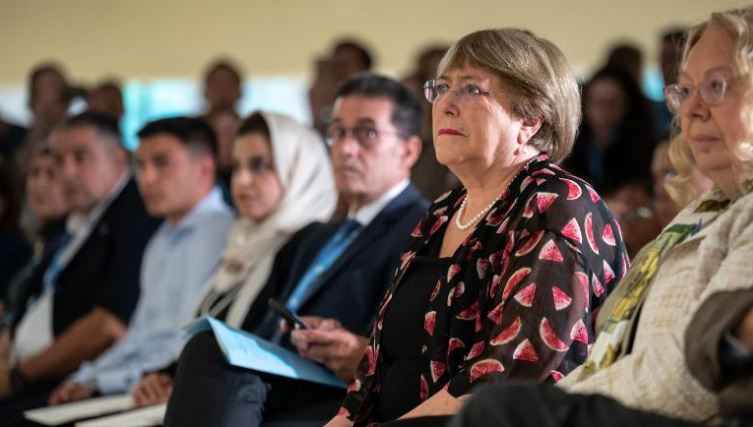 China has committed “serious human rights violations” against Uyghur Muslims in its northwestern region of Xinjiang, which may amount to “crimes against humanity” according to a long-awaited report released Wednesday by the United Nations High Commissioner for Human Rights.

The detailed 45-page report, published just minutes before outgoing commissioner Michelle Bachelet’s term in office came to an end at midnight Geneva time, had been repeatedly delayed, and its release vehemently opposed by China.

The report, which documented what it described as arbitrary and discriminatory detention of members of Uyghur and other predominately Muslim groups within the context of the government’s “application of counter-terrorism and counter-‘extremism’ strategies,” was hailed by rights groups as a groundbreaking moment in the effort to hold the Chinese government to account.

The report comes four years after a committee of UN experts called attention in August 2018 to “credible reports” that more than 1 million Uyghur and other Muslim minority peoples were interned in extrajudicial camps in Xinjiang for “re-education” and indoctrination.

China has fiercely denied committing rights violations. It has previously said it established such centers as a way to counter “extremism” in the region and has since said the facilities were closed — a claim the UN office said it could not verify.

According to the UN report, “the described policies and practices in (the region) have transcended borders, separating families and severing human contacts, while causing particular suffering to affected Uyghur, Kazakh, and other predominantly Muslim minority families, exacerbated by patterns of intimidations and threats against members of the diaspora community speaking publicly.”

The Chinese government, which had repeatedly objected to the release of the report, responded in a 131-page document — nearly three times the length of the report itself — in which it decried the findings as “based on the disinformation and lies fabricated by anti-China forces.”

Beijing’s response was released by the Office of the United Nations High Commissioner for Human Rights (OHCHR) in tandem with its own report after China was given advance access to the document to review and respond.

Separately on Thursday, a spokesperson for the Ministry of Foreign Affairs said China “rightfully rejects” the report, which it called “invalid and illegal.” The spokesperson also accused the Office of High Commissioner of being “reduced to the role of a hitman and an accomplice of the US and the West in their efforts to control developing countries.”

While the report was welcomed by some Uyghurs overseas and human rights activists, any move toward further investigation — as called for in the report — would need approval from UN member states in a body where China holds considerable sway.

Action on other recommendations in the report, such as the release of arbitrarily detained individuals and clarification of the whereabouts of missing individuals, would depend on the cooperation of the Chinese government.

The report focuses on what it describes as “arbitrary detention and related patterns of abuse” within what Beijing claims are “vocational education and training centers” between 2017 and 2019.

It concluded that the descriptions of detentions during this period “were marked by patterns of torture or other forms of cruel, inhuman or degrading treatment or punishment.”

The report details findings from what the Office of the High Commissioner describes as years of efforts to analyze and assess public documents, open source, and research materials. It also includes information gathered from interviews with 40 people of Uyghur, Kazakh, and Kyrgyz ethnicities. Twenty-six of the interviewees reported that they had been either detained or had worked in various facilities in Xinjiang.

“The extent of arbitrary and discriminatory detention of members of Uyghur and other predominantly Muslim groups … may constitute international crimes, in particular crimes against humanity,” according to the report.

The UN report said China’s “anti-terrorism law system” is “deeply problematic from the perspective of international human rights norms and standards” and “has in practice led to the large-scale arbitrary deprivation of liberty” of Uyghurs and other Muslim communities.

While the High Commissioner was blocked by Beijing from conducting an on-the-ground investigation, the report did include descriptions from those who had experienced the so-called vocational and educations training centers in Xinjiang, in their own words.

“I was not told what I was there for and how long I would be there. I was asked to confess a crime, but I did not know what I was supposed to confess to,” one person interviewed by the office said, according to the report.

The report also said almost all interviewees described either injections, pills or both being administered regularly, which made them feel drowsy, while some interviewees also spoke of “various forms of sexual violence,” including some instances of rape, as well as various forms of sexual humiliation, including forced nudity, according to the report.

The allegations of sexual and gender-based violence “appear credible,” the report said, but it is not possible to “draw wider conclusions” about the extent to which they were part of broad patterns within the facilities based on existing information, it said.

“The Government’s blanket denials of all allegations, as well as its gendered and humiliating attacks on those who have come forward to share their experiences, and have added to the indignity and suffering of survivors,” the report said.

The report said while it cannot confirm the number of detainees in the centers, a reasonable conclusion can be drawn from the available information that the number of individuals in the facilities, at least between 2017 and 2019, was “very significant, comprising a substantial proportion” of the Uyghur and other Muslim minority populations.

This detention system, the report found, also came against “the backdrop of broader discrimination” against members of Uyghur and other mainly Muslim minorities based on “perceived security threats” emanating from individual members of these groups.

Those have included undue restrictions on religious identity and expression, and on the rights to privacy and movement. The report also pointed to “serious indications” of violations of reproductive rights through the “coercive and discriminatory enforcement of family planning and birth control policies.

It also addressed allegations of forced labor in the region, stating that employment schemes for the purported purposes of poverty alleviation and prevention of extremism, “may involve elements of coercion and discrimination on religious and ethnic grounds.”

In its response Wednesday, Beijing said the report “distorts” China’s laws and policies.

“All ethnic groups, including the Uygur, are equal members of the Chinese nation,” China’s response said. “Xinjiang has taken actions to fight terrorism and extremism in accordance with the law, effectively curbing the frequent occurrences of terrorist activities. At present, Xinjiang enjoys social stability, economic development, cultural prosperity, and religious harmony. People of all ethnic groups in Xinjiang are living a happy life in peace and contentment.”

A separate statement from China’s mission to the UN in Geneva described the report as “a farce planned by the US, western countries and anti-China forces,” adding, “the assessment is a political tool” and “a politicized document that ignores the facts.”

Throughout the past four years, the international community within the UN has done little about the allegations of human rights abuses in Xinjiang.

Countries in its main human rights body have not agreed to any formal call for a probe, while appeals from UN experts for China to allow for rights monitoring have been met with fierce denials of wrongdoing from Beijing and no invite for free access to come see for themselves.

That deadlock within the UN has heightened the attention and importance of the High Commissioner’s report for those who have sought to call China to account within the international system.

The report will not clear the political challenges to advancing calls for a formal UN investigation, as China holds significant sway among UN member states. But rights activists have said it should be a wake-up call for international action.

Omer Kanat, executive director of the Uyghur Human Rights Project, called the report a “game-changer for the international response to the Uyghur crisis.”

“Despite the Chinese government’s strenuous denials, the UN has now officially recognized that horrific crimes are occurring,” he said in a statement signed by group of 60 Uyghur organizations from 20 countries.