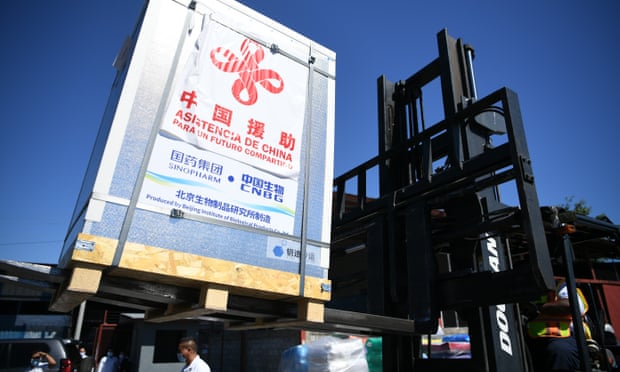 China has opened an embassy in Nicaragua for the first time since 1990, less than a month after the central American country cut ties with Taiwan.

The Nicaraguan foreign minister, Denis Moncada, said there was an “ideological affinity” between the two countries and thanked China for donating 1m doses of the Sinopharm coronavirus vaccine.

Nicaragua’s president, Daniel Ortega, established relations with China in 1985, but after he lost the election in 1990, Nicaragua recognised Taiwan.

Ortega returned to power in 2007 and in won re-election in November. In December, Nicaragua broke off relations with Taiwan and last week it seized the island’s former embassy and diplomatic offices, saying they belong to China. However, China’s new embassy is located elsewhere, and it is unclear what China will do with the Taiwan building.

Before departing a week ago, Taiwanese diplomats tried to donate the properties to the Roman Catholic archdiocese of Managua. But Ortega’s government said that any such donation would be invalid.

Taiwan’s foreign relations ministry condemned the “gravely illegal actions of the Ortega regime”, saying the Nicaraguan government violated standard procedures by giving Taiwanese diplomats just two weeks to get out of the country.

It said Taiwan “also condemns the arbitrary obstruction by the Nicaraguan government of the symbolic sale of its property to the Nicaraguan Catholic church”.

Monsignor Carlos Avilés, the vicar of the archdiocese of Managua, told the newspaper La Prensa that a Taiwanese diplomat had offered the property to the church, but added: “I told him there was no problem, but the transfer was still in the legal process.”

Nicaragua’s move to cut ties with Taiwan increased the island’s diplomatic isolation on the international stage.

The most recent transfers of recognition from Taipei to Beijing were by Solomon Islands and Kiribati, in September 2019. El Salvador and the Dominican Republic switched in 2018, and Panama in 2017, after which it received waves of Chinese investment.

Just 14 governments, primarily in the Pacific and Latin American regions, maintain formal ties with Taiwan. After Nicaragua, many eyes are now on Honduras and its newly elected president, Xiomara Castro.