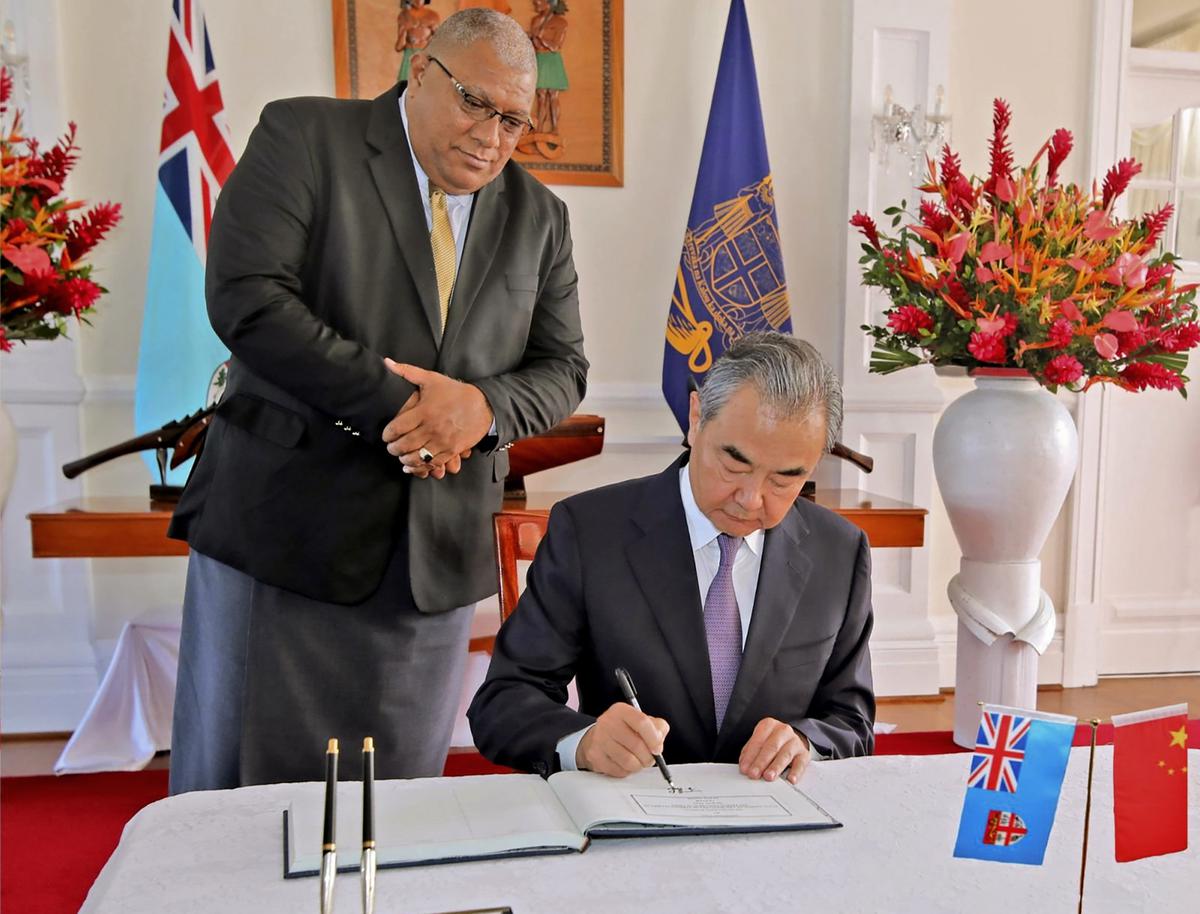 China’s Foreign Minister Wang Yi on May 30 urged the Pacific region not to be “too anxious” about his country’s aims after a meeting in Fiji with his counterparts from 10 island nations was unable to agree to a sweeping trade and security communique.

Wang hosted the meeting with Foreign Ministers from Pacific island nations with diplomatic ties with China midway through a diplomatic tour of the region where Beijing’s ambitions for wider security ties has caused concern among U. S. allies.

After the meeting, which included Samoa, Tonga, Kiribati, Papua New Guinea, Vanuatu, Solomon Islands, Niue and Vanuatu, Wang said the nations had agreed on five areas of cooperation, but further discussions were needed to shape more consensus. The five areas he listed included economic recovery after the COVID-19 pandemic and new centres for agriculture and disaster, but did not include security.

“China will release its own position paper on our own positions and propositions and cooperation proposals with Pacific island countries and going forward we will continue to have ongoing and in-depth discussions and consultations to shape more consensus on cooperation,” he told reporters in Fiji. Questions at the media briefing were not allowed.

Wang said some had questioned China’s motives in being so active in the Pacific islands and his response was China supported developing countries in Africa, Asia and the Caribbean also. “Don’t be too anxious and don’t be too nervous, because the common development and prosperity of China and all the other developing countries would only mean great harmony, greater justice and greater progress of the whole world,” he said.

Taking questions after Wang’s briefing, China’s Ambassador to Fiji, Qian Bo, said participants had agreed to discuss the draft communique and the five-year plan “until we have reached an agreement.” “There has been general support from the 10 countries with which we have diplomatic relations, but of course there are some concerns on some specific issues.”

Fiji’s Prime Minister Frank Bainimarama told reporters the Pacific nations were prioritising consensus. “Geopolitical point-scoring means less than little to anyone whose community is slipping beneath the rising seas, whose job is being lost to the pandemic, or whose family is impacted by the rapid rise in the price of commodities,” said Mr. Bainimarama.

In a written address to the meeting, China’s President Xi Jinping said China will always be a good friend of Pacific Island countries no matter how the international situation changes, China’s state-owned CCTV reported.

Several invited nations want to defer action on the draft communique or have it amended, an official from one Pacific country earlier told Reuters.

The United States, Australia, Japan and New Zealand have expressed concern about a security pact signed by Solomon Islands with China last month, saying it had regional consequences and could lead to a Chinese military presence close to Australia.

The new Australian government has made the Pacific islands an early foreign policy priority to counter Beijing’s push, despatching the foreign minister to Fiji with the message Australia would put new priority on the region’s biggest security challenge of climate change and announcing a new visa programme to allow Pacific island citizens to migrate.

In Honiara last week, Wang condemned interference in the deal and said the Solomon Islands’ relationship with China was a model for other Pacific island nations.

With borders closed across the region because of the COVID-19 pandemic, most Foreign Ministers are attending the Fiji meeting by video link. In several Pacific countries, the Foreign Minister is also Prime Minister. Wang will travel to the South Pacific kingdom of Tonga for a two-day visit on Tuesday.