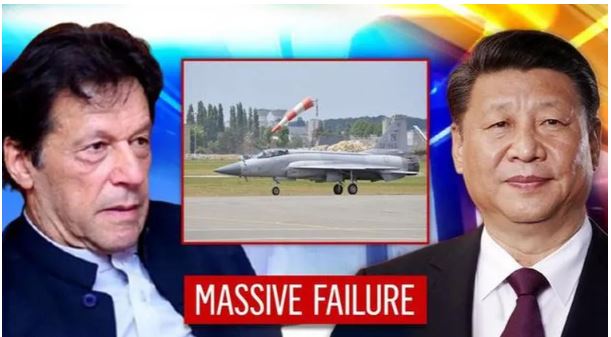 While attempting to retaliate against India’s airstrike on a Pakistani terrorist group in February 2019, the JF-17 had performed poorly against IAF Mirage-2000

Pakistan’s JF-17 “Thunder” which was touted as a low-cost, light-weight, all-weather multi-role fighter with a Chinese airframe, has turned into a liability for Islamabad, owing to its high operations and maintenance cost as compared to the modern weaponry systems.

In 1999, Pakistan and China had signed an agreement to jointly develop and produce the JF-17 “Thunder” and share the development cost. Pakistan believed that the fighter would match the standards of Su-30MKI, Mig-29, and Mirage-2000. It was meant to be “equipped with Western avionics and powered by the Russian Klimov RD 93 aero-engine”.

However, a Pentapostagma report states that the aircraft’s capability is judged by the avionics, weapons, and engine equipping it and the JF-17 fails to hit the mark in most areas.

While attempting to retaliate against India’s airstrike on a Pakistani terrorist group on February 27, 2019, the JF-17 had performed poorly against IAF Mirage-2000 and SU-30s.

“In the Air Defence role, it indigenous Link-17 data link is not only unreliable; it does not have sufficient data transfer rate and can never be integrated with the F-16 fighter’s Link-16 to give the aircraft true interoperability capability. The ‘Thunder’ does not have even an effective BVR or Airborne Interception radar,” said Pentapostagma.

Touted to be the “next best Pakistan Air Force (PAF) fighter after the F-16,” its extremely low endurance, poor accuracy, and low weapon carrying capability were amply demonstrated in February 2019, when all its Range Extension Kit (REK) bombs failed to hit the target in the face of effective jamming and attacks by Indian fighters, it said.

The critical parts of the JF-17 avionics, KLJ-7 Al radar, and Weapon Mission Management Computer, both face several problems. While the KLJ-7 radar shows poor performance and faces several operational and maintenance problems, the WMMC has limited capacity, with a high rate of failure of various modules, including the Main Computer module.

According to Pentapostagma, “Malfunction of the WMMC has caused Launch Zones of Beyond Visual Range air-to-air missiles to shrink during combat exercises. Due to its unreliability, PAC is now attempting to indigenize the WMMCs. The weapon load that the aircraft can carry is also not remarkable. Its integral 23 mm Gun initially experienced gun stoppages in the air and now has problems with the 23 mm round bursting.”

“Other than the Chinese SD-10 BVR, REK, and C-802AK anti-ship missile, the aircraft carries the normal weapon load of a MiG-21. Efforts to integrate the aircraft with other Chinese weapons are in progress, but with limited success. “

The root cause of the JF-17’s poor performance is the use of a single Russian RD-93 engine, which is known for its poor functions. Other problems of the fighter jet include “Nose Landing Gear shimmies while taxing and a number of aircraft experience nose wheel vibrations”. Besides, the ventral trails were also found cracked indicating poor metallurgy or design.

According to Pentapostagma, Pakistan is now eyeing China’s J-10 fighter, which is cheaper at its purported price of USD 25 million each. However, the depreciation of the Pak Rupee at almost 30% will make the purchase of aircraft an expensive affair for Islamabad.

As the Pakistan government struggles to shore up its financial situation, any new customers of the JF-17 will find it difficult to get the material and spares support that Islamabad needs to procure from China.

“Even if China is able to supply these spares, it will do so at exorbitant prices which escalate every year, as it does with Pakistan. Pakistan has expended more than USD 3 billion on acquiring these 3.5 generation fighters,” the Pentapostagma stated.