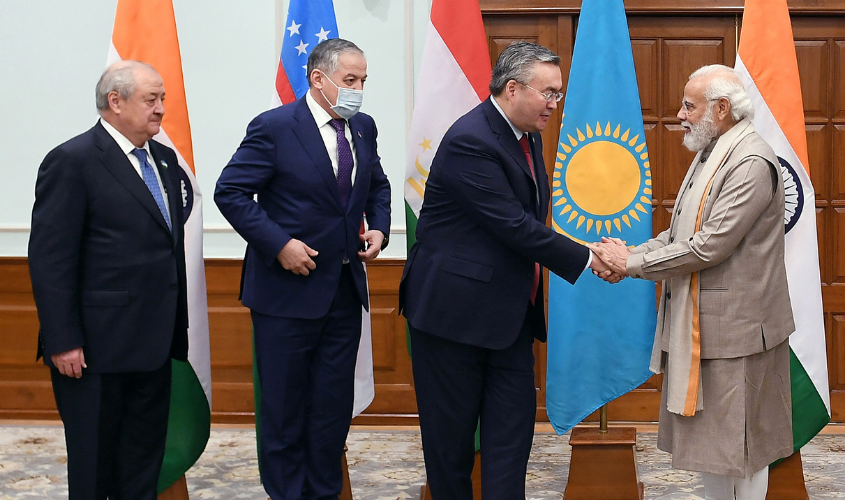 India’s “formidable and massive” outreach to the resource-rich and strategically crucial Central Asian nations has driven Russia and China jittery, with both the countries activating their diplomatic channels in a big way to expand footprints in the Central Asian region. The importance of the region has been accentuated more after unpleasant developments in Afghanistan. Top diplomatic sources posted in South Block told The Sunday Guardian that the Chinese and Russian diplomats were seen vying with one another to establish contacts with the officials of Kazakhstan, the Kyrgyz Republic, Tajikistan, Turkmenistan and Uzbekistan when foreign ministers of these central Asian countries were in Delhi for the third round of India-Central Asia Dialogue hosted by foreign minister Subramanyam Jaishankar 18-20 December. Carrying the message and orders from their respective leaderships in Moscow and Beijing, these diplomats were actually working on the agenda of expanding the footprints of their countries in the Central Asian region. Highly-placed sources told The Sunday Guardian that “Russian President Vladimir Putin chose to call Prime Minister Narendra Modi on the day the India-Central Asia Dialogue concluded (20 December) and made it a point to reassure the Indian leadership to step up Delhi-Moscow cooperation in the Central Asian region in view of the security threat from Afghanistan.” Sources said that “Putin was earlier supposed to call the PM on some other date around Christmas, but it was advanced coinciding with the India-Central Asia dialogue”. According to sources, a couple of senior Russian diplomats also met with their counterparts from some of these five countries. Similarly, China is learnt to have chalked out a detailed plan for its foreign minister’s visit to the Central Asian countries sometime next month, sources said. Chinese diplomats are said to have spoken to officials of the five countries regarding the plan in what is being seen as a panic reaction to India’s outreach to the region. While Russia is keen to expand its influence and presence in the Central Asian region so as to secure its backyard in view of the imminent threat of terrorism from Afghanistan, China is trying to fortify its engagement more for its geopolitical and geo-economic objectives. There is no denying that Beijing is also keeping in mind its rivalry with India in the central Asian region as well. In the last few months, India has stepped up its engagement with the region. Apart from holding talks with these countries at different levels, India has also invited the presidents of all the five nations as chief guests for the Republic Day Celebrations next month. This is not going down well with China, and the leadership of the country is said to be panicky over this. Sources say that Beijing is pressurizing its diplomats to intensify efforts to score over India in the Central Asian region. The US is also trying to get back in the region which has assumed major significance since the Taliban takeover of Afghanistan. Moreover, the region is becoming the center of a new great power rivalry due to its huge mineral reserves. Undoubtedly, Russia is an important player in the region. China is also firmly entrenched with its Road and Belt Initiative. Pakistan is also not any less active in the central Asian region, with India keeping a close eye on its activities as well. With all this in view, India has stepped up its outreach to the region which is considered by Delhi as an extended neighborhood. The concern about ISIS, Al Qaeda and other terror groups taking root and spreading extremist ideology and terrorism is a major issue for Afghan region. “Since India’s experience in tackling terrorism is well-known, these republics want its cooperation in the region to deal with any such security threat,” a diplomat says. “That New Delhi is going all out to woo Central Asian rulers is giving many players sleepless nights,” he added. But India is determined to increase its outreach to Central Asia with greater vigour. Delhi has decided to hold more bilateral meets in days to come, say diplomats. India has offered to increase the slots for Central Asia in its Indian Technical and Economic Cooperation Programme (ITEC), which has been New Delhi’s hugely successful outreach to developing nations. “No doubt, connectivity to the region is a major issue. But despite that India had been buying uranium for its nuclear power plants from Kazakhstan,” an official said. Referring to the connectivity issue, PM Modi once said, “The land-locked Central Asian countries can benefit immensely by connecting with India’s vast market. Unfortunately, many connectivity options are not open to them today due to lack of mutual trust. Our investment in Iran’s Chabahar port and our efforts towards the International North-South (Transit) Corridor (INSTC) are driven by this reality.” PM Modi also visited all five central Asian countries in July 2015 in what underlined India’s emphasis on strengthening ties with the Central asian nations. This was followed in January of 2019 by the first India-Central Asia dialogue in Samarkand in Uzbekistan. The second India-Central Asia Dialogue was held virtually on 28 October 2020.