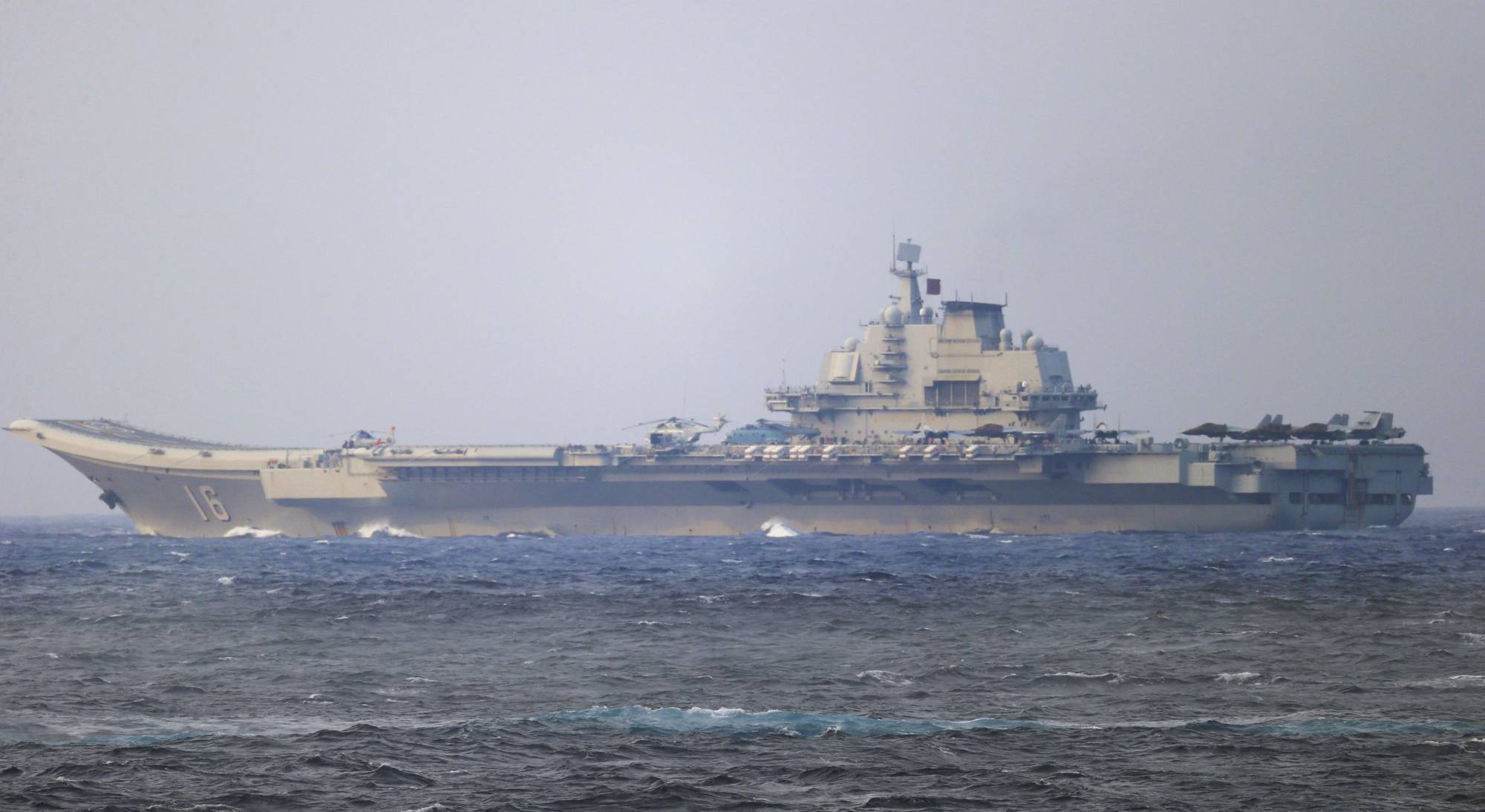 The Japan Maritime Self-Defence Force dispatched the Izumo, a helicopter carrier, as well as P-1 maritime patrol aircraft and P-3C anti-submarine aircraft to monitor the passage of the Chinese vessels.

Eight Chinese warships, led by People’s Liberation Army (PLA) Navy’s aircraft carrier Liaoning, passed between southern Japan’s Okinawa island chain on Monday in a show of strength that state media described as “preparation for missions that include a potential military conflict across the Taiwan Strait”.

The warships sailed between the main Okinawa island and Miyako island, the Japanese defence ministry and Chinese state media reports said, adding while there was no incursion into Japan’s territorial waters, helicopters on board the Liaoning carrier took off and landed.

In Chinese naval doctrine, these islands are part of the “first island chain” and sailing past these means a projection of power by the Chinese navy.

The Japan Maritime Self-Defence Force, or the Japanese navy, dispatched the Izumo, a helicopter carrier, as well as P-1 maritime patrol aircraft and P-3C anti-submarine aircraft to monitor the passage of the Chinese vessels, Japan’s defence ministry said in the press release.

The US 7th Fleet, which is stationed in Japan, is also expected to monitor the passage of the Chinese warships.

Consisting of at least eight warships, including destroyers, the aircraft carrier group is the largest to head out to far sea , “marking a significant combat capability boost in preparation for missions that include a potential military conflict across the Taiwan Straits”, the state-run Global Times said, quoting experts.

China currently has two aircraft carriers, Liaoning and Shandong, and a third one is expected to be commissioned this year as the PLA Navy rapidly expands.

According to the news report, based on previous voyages, after sailing through the Miyako Strait, the Chinese warships are expected to sail further east into the Pacific Ocean, or they could transit through the Bashi Channel south to the island of Taiwan and conduct exercises in the South China Sea.

It was the first time that a Chinese aircraft carrier was confirmed to have passed through the area since December last year, according to Japanese national broadcaster NHK.

China claims Taiwan as a renegade region and has never ruled out using force to reunify it with the mainland.

In recent months, PLA has frequently deployed warships and flown fighter aircraft in the Taiwan Strait as part of real combat-like drills, considered a show of strength to the self-ruled democracy.

China already has the largest navy in the world and, according to a 2021 US department of defence report, Beijing plans to increase the size from 355 to 460 ships by 2030.

Aircraft carrier Liaoning’s ongoing passage and “realistic combat training mission” is also a message to the US-led Quad comprising India, Australia and Japan, which Beijing has said is “clique” to suppress China in the Pacific maritime region.

India’s external affairs minister S Jaishankar in February had dismissed China’s opposition to the Quad, saying the grouping will do “positive things” and contribute to the prosperity and stability of the strategic Indo-Pacific region.

Criticising the Quad repeatedly will not make the four-nation grouping less credible, Jaishankar had said after meeting with the other foreign ministers of the group — US secretary of state Antony Blinken, Japan’s Yoshimasa Hayashi and Australia’s Marise Payne.