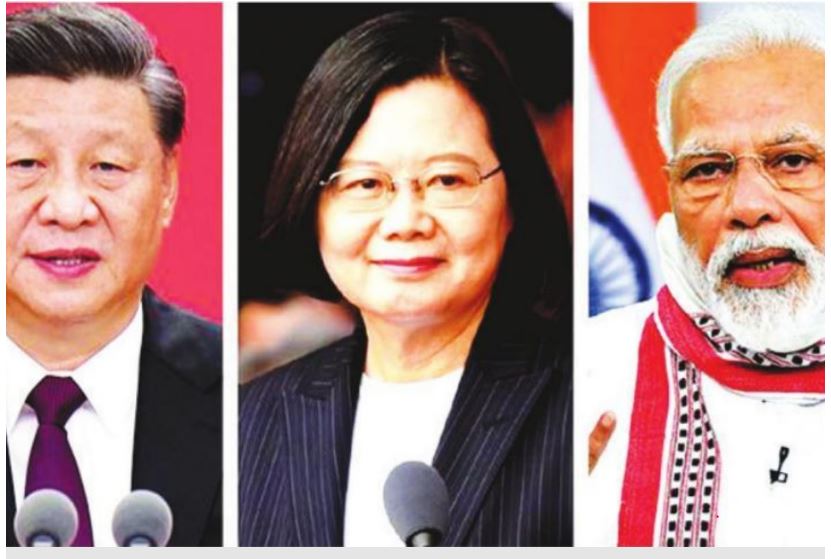 After Nancy Pelosi’s visit to Taiwan and the conduct of Chinese military exercises off the Taiwan coast, it appears many nations are joining hands to support Taiwan. The Taiwanese government released a statement reading, “The government of ROC (Taiwan) wishes to convey sincere gratitude to the executive branches and parliamentarians of over 50 countries, including India, which have called on all sides to exercise restraint, de-escalate tensions, avoid unilateral actions to change status quo and maintain peace and stability in the region.” India, as is customary, did not accuse or support either side but called for restraint. Following in the footsteps of Pelosi, multiple US Congress delegations have visited Taiwan in military aircraft prompting further Chinese reactions including military exercises.

It appears the US is intentionally provoking China. Lithuania angered China by opening its trade representative office in Taiwan. What irritated China was Lithuania using the name Taiwan rather than Chinese Taipei. The US also announced the commencement of trade and economic talks with Taiwan, implying that while it announced adherence to its One China policy, it refuses to abide by it. European diplomats were called by the Chinese foreign ministry to lodge a protest against the criticism of the G 7 and EU nations on its military exercises off the Taiwan coast. The Japanese not only criticised Chinese exercises but also decided to enhance defence capabilities to counter Chinese aggression, as a few missiles fired during the Chinese exercises landed in Japan’s Exclusive Economic Zone (EEZ).

China defended its missile firing in Japanese territory by stating, “As for the EEZ, China and Japan have not carried out maritime delimitation in relevant waters, so there is no such thing as an EEZ of Japan.” A report mentioned that in response to Chinese aggression, Japan is considering the deployment of more than 1,000 long-range cruise missiles around the southern Nansei islands, capable of targeting coastal areas of North Korea and China. Taiwan, backed by global support, displayed its intent to stare down Chinese threats. Its President, Tsai Ing-wen, stated, “Facing deliberately heightened military threats, Taiwan will not back down. We will… continue to hold the line of defence for democracy.” In response to Chinese exercises, Taiwan held its own defensive exercises. Taiwan also announced welcoming other visitors to the country throwing an open challenge to China.

The next step for China will be to pressurize the 14 nations that recognize Taiwan to break diplomatic ties with it. China, seeking to prove its global power, sought support for its One China policy. The Chinese spokesperson, Hua Chunying stated, “over 160 countries have spoken up for justice, condemned the visit as a serious, reckless and irresponsible provocation and expressed their commitment to the one-China principle.” No list was provided. Asean nations, caught between the big power rivalry of the US and China, maintained silence. They would prefer the status quo. Western powers joined hands to back Taiwan against Chinese pressures. India was among the nations which avoided reiterating its One China policy post the visit, despite repeated calls for the same.

Sun Weidong, the Chinese ambassador to Delhi stated, “My understanding is that India’s ‘One China’ policy has not changed…We hope that India can reiterate support for the One China principle.” The Chinese embassy’s Delhi spokesperson, Wang Xiaojian reiterated, “India was one of the first countries to recognise that there is only one China. The Chinese side is willing to push forward the development of our relations on the basis of the one-China principle.” India refused to oblige, its spokesperson mentioned “India’s relevant policies are well-known and consistent. They do not require reiteration.” For China, this was a vague statement. China had believed that its threats to the US would result in President Biden backing down and there would be no global support for Pelosi’s visit. However, Chinese bullying, offensive actions, moving nations into debt traps and wolf warrior diplomacy resulted in the opposite. The fact that Taiwan received vast backing and there were more calls for restraint than criticism indicated that China is losing its global grip. This comes at a crucial time for China, as its 20th party congress, where Xi is seeking a third term is around the corner. With a dwindling economy alongside collapsing banks, increasing unemployment (around 20 per cent) and a failed zero Covid policy, Xi is facing internal backlash.

Had the US cancelled the visit or China prevented Pelosi’s aircraft from landing, Xi would have become a revered leader. The US’ continued arming of Taiwan makes it a formidable opponent. China is aware that success in Taiwan could come at a very heavy cost, or even that it could be drawn into an unending conflict. Hence, threats will continue, with forceful occupation unlikely. China hopes that its actions including diplomatic isolation, continuous exercises and the threat of application of force, would wear Taiwan down to levels where it would be willing for dialogue. For India, adhering to its One China policy was understandable provided India-China relations were stable. Delhi is aware that, any deviation or even a hint of deviation from this policy has an immense psychological impact on China, especially since India hosts the Dalai Lama and the Tibetan government in exile. Since the Ladakh standoff, India has hinted toward diplomatic conflict. Having moved closer to the West, and becoming a member of QUAD, aimed at containing Chinese influence, India will not bow to Chinese demands.

By refusing to reiterate its One China policy, providing support to the Dalai Lama during his visit to Ladakh and also the PM wishing him on his birthday, India is challenging China’s core beliefs. The planned conduct of Indo-US exercises in Auli, close to the LAC, despite Chinese objections, further conveys Indian intent. In case China bends and accepts the April 2020 status quo, India could revert to its earlier stance. The message must go that unless China adopts a One India policy and normalizes the LAC, India will not reiterate its one-China policy. India is no longer a pushover, despite possessing a weaker economy and a lower defence budget. It has diplomatic weight, and it must exploit it.