China: The Atrocities Against Uyghurs And Other Minorities In Xinjiang 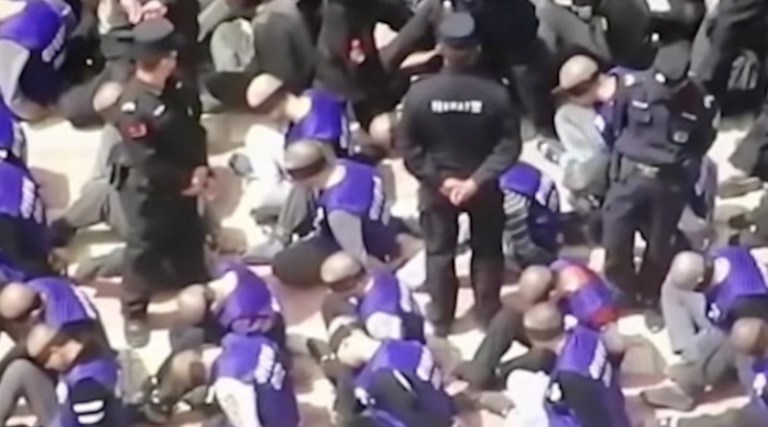 The Chinese government’s systematic, comprehensive, and multi-faceted genocidal policy against Uyghurs and other Turkic Muslims has reached a new phase in my homeland.

The Uyghur Human Rights Project (UHRP) has warned for more than three years that the end goal of this policy is the destruction of Uyghur culture, traditions, language, and faith. The Chinese state has criminalized being Uyghur. The policies are eliminating our community ties, all genuine practices and expressions of our culture, language, and civilizational accomplishments in poetry, literature, and all the arts, theology, architecture, and scholarship. Uyghur society’s religious and secular leadership, the university professors and high school teachers, successful business owners, and entrepreneurs have been swept wholesale into camps and prisons. In many cases, their entire families have disappeared, including their parents, siblings, and children.

Very soon, anything remaining that can be described as “Uyghur” in our own homeland will be an empty shell, a Potemkin show. In fact, it is already a reality due to the inadequate international response to this staggering 21st century high-tech genocide.

I want to emphasize that genocide denial is in full swing. The Chinese government is not only carrying out a brutal policy of state violence that is causing immeasurable, irreversible human suffering. It is demanding that the world praise its policy. The CCP is now producing a daily stream of material for international audiences about its policies towards Uyghurs: government statements, state-media print and video output, and highly

produced content for social media platforms. The CCP is taking advantage of its seat in multilateral forums to assert that it deserves praise for (1) commendable “anti-terrorism” policies, (2) successful “poverty alleviation” by the Xinjiang government, and (3) enabling Uyghurs to live a “happy life.”1

Furthermore, China is not only committing genocide and demanding that the world praise its actions. The government also forces Uyghurs to participate in the genocide, dancing and singing for the cameras and recording in a string of videos denouncing criticism of China. Dozens of Uyghurs have been forced to denounce their own relatives abroad for speaking up for their freedom. In February, UHRP released a detailed analysis of this cruel propaganda, in which Uyghurs say scripted lines such as “the government never oppresses us.”2

The government has mounted an aggressive campaign to push back against the global pressure campaign to end the state-imposed forced labor of Uyghurs.3 On March 24, 2021—just two days after coordinated human-rights sanctions on Xinjiang officials by the US, UK, EU, and Canada—the government manufactured a purported boycott by Chinese consumers against foreign brands to defend what they call “Xinjiang cotton.” As part of the “defend Xinjiang cotton” campaign, one video showed Uyghurs dressed in traditional performance costumes, dancing, holding a fluffy ball of unprocessed cotton in each hand, and singing a song of praise for “Xinjiang cotton.” The Chinese government has also recruited foreigners to praise its policies.4 China Global Television Network has also played a significant role in justifying China’s Xinjiang policies, the topic of a forthcoming UHRP publication.

The Evidence of Atrocity Crimes

The international documentation of the Chinese government’s criminal policies is so voluminous that a bibliography of related research and reporting, covering 2017-2021, produced by Professor Magnus Fiskesjö of Cornell University, currently runs 1,450 pages.5 The evidence comes from a wide variety of sources.

The key sources are Uyghur and Kazakh survivors of concentration camps and forced labor — like Ms. Tursunay Ziyawudun, who is testifying before a government for the first time today, Uyghur and Kazakh diaspora members testifying about the fate of their loved ones,6 independent investigative journalism, satellite imagery documenting the rapid construction of vast prison-camps, analysis of open-source information on the Chinese internet, the Chinese government’s public statements, and leaked Chinese government policy documents.

Concentration Camps: The Xinjiang government’s concentration camps, a massive program to “round up those who should be rounded up,”7 are built on extrajudicial detention, collective punishment, guilt-by-association, systematic torture and rape, and medications inducing infertility and impaired mental function.

Since 2017, the Chinese government has arbitrarily detained millions of Uyghur, Kazakh, and other Turkic Muslims in concentration camps. People are taken from their homes or off the street, a black hood is put over their heads, and then their nightmare begins. Camp survivors have reported that they have suffered torture, rape, forced abortion and sterilization, withholding of medical care, and intense political indoctrination.

In the camps, they are forced to shout, over and over, “My soul is infected with serious diseases,” “I don’t believe in God, I believe in the Communist Party.” The number of deaths in custody is unknown.

The reasons for detention provided in Chinese government documents, such as the Qaraqash document,8 include being an “unsafe person” who is 40 or younger, ordinary Muslim practices such as growing a beard or wearing a veil, having relatives outside of China, or a history of traveling abroad, and violations of family planning regulations.

The thought-crimes recorded in this document, which is a record of actual detentions in one subdistrict in Qaraqash county, include:

Separation of Children: Nearly half a million Muslim children have been separated from detained parents and placed in state-run orphanages and boarding schools, where they are forced to praise the Chinese Communist Party and its leaders and to speak Mandarin. These are, in effect, concentration camps and brainwashing facilities for children.9

The government’s objective for those not in prisons and extra-legal detention, according to government documents, is to have every Uyghur in a government-assigned place of work.

Forced labor is such an integral part of the government’s plan for total control that all products coming from the Uyghur Region, from cotton to solar panels, must be assumed to be tainted by forced and prison labor. Through partnership with companies from the eastern part of China, so-called “poverty- alleviation” and “mutual pairing programs” bring hundreds of thousands of Uyghurs to work in fields and factories within the Region and cities across China against their will.

A deeply troubling aspect of China’s forced labor scheme, however, is the complicity of international companies, including US companies. Uyghur forced labor is deeply embedded in these companies’ Chinese supply chains. Given that 80% of China’s cotton is grown in the Xinjiang Region, 20% of the entire global apparel industry is potentially implicated. American and international companies declare that they have “zero tolerance” for forced labor and claim that audits have found no evidence of forced labor in their supply chains. As I pointed out in my October 2019 Congressional testimony, “due diligence” audits are impossible in the Uyghur Region.

Numerous independent reports10 have documented large- scale destruction of Uyghur religious and cultural sites, at a level unseen since the end of the Cultural Revolution (1966- 1976). For example, out of approximately 24,000 mosques in Xinjiang, fewer than 15,000 now remain standing; out of those 15,000, more than half have suffered damage inflicted by government authorities.11

The destruction of these important religious sites, including an 800-year-old mosque, is a critical part of the government’s plan to erase Turkic Muslims’ ethno-religious and cultural identities in East Turkistan forcibly assimilate them under Xi Jinping’s “Sinicization of Religion” policy.

Digital Authoritarianism: Integral to China’s overall suppression of Uyghurs and other Turkic Muslims is the pervasive use of advanced surveillance technology and a myriad of digital tools such as the ubiquitous presence of surveillance cameras, compulsory collection of DNA and other biometric data, iris scan, facial and voice recognition, big data, and artificial intelligence.

The Xinjiang and national governments have turned the Uyghur homeland into a frontline laboratory, where the most extreme and repressive forms of these invasive technologies and programs are deployed.12 Linked to a centralized database system known as the “Integrated Joint Operation Platform” (IJOP) and combined with the Social Credit System, the Chinese government conducts mass surveillance and “preventive policing” to control and subdue Turkic Muslims in Xinjiang.

Digital authoritarianism is not limited to domestic use, however, as China has exported its surveillance technologies to dozens of countries, including countries ruled by authoritarian regimes that may use the “China Model” to persecute human rights activists and political opponents.

Prevention of Births: The Chinese government’s genocidal practices also include forced sterilization and forced abortion. The combined natural population growth rates in Kashgar and Hotan, two of the prefectures that make up the Uyghur heartland, fell by a staggering 84 percent between 2015 and 2018. Xinjiang authorities officially reported that birth rates in the Region declined by an additional 24 percent in 2019, with declines between 30 and 56 percent in some majority-Uyghur districts. In contrast, birth rates across the whole country fell by only 4.2 percent between 2018 and 2019.

In January, the Chinese Embassy in Washington boasted about this policy, saying that the government had ensured that Uyghur women would no longer be “baby-making machines.”13

Based on these statistics alone, the Chinese government’s egregious policies in the Uyghur region meet the legal threshold for genocide under provisions of the Genocide Convention as well as the Rome Statute of the International Criminal Court.

In January 2021, the Trump administration determined that the atrocities taking place in Xinjiang indeed represent genocide and crimes against humanity, and the Biden administration has affirmed this determination. Secretary Blinken told 60 Minutes on Sunday, once again confirmed that “we’ve made clear that we see a genocide having taken place against the Uyghurs.”14

From 2019 through 2021, the US has imposed punitive sanctions against 74 PRC officials, government entities,
and companies for gross human rights violations against Uyghurs and other Turkic peoples. Five specific policies were implemented to end complicity in US supply chains.

The Canadian, Dutch, and the UK parliaments have joined the United States in recognizing the CCP’s policies as genocide. However, the international response is far too little, far too late. To date, other governments had imposed sanctions of any kind only once, when Canada, the UK, and the EU jointly imposed coordinated Magnitsky-style human-rights sanctions on March 22, against four PRC officials and the Xinjiang police department.

14. The US government should allocate funding and other resources for humanitarian intervention and refugee resettlement assistance for Uyghurs and other Turkic Muslims currently at risk in other countries. In addition, the US should provide funding for Uyghur human-rights documentation and international advocacy, cultural preservation and expression, counseling and other psycho-social support for victims and secondary survivors of the genocide through the global Uyghur diaspora, and appropriations for the full, authorized budget for Radio Free Asia’s Uyghur Service.