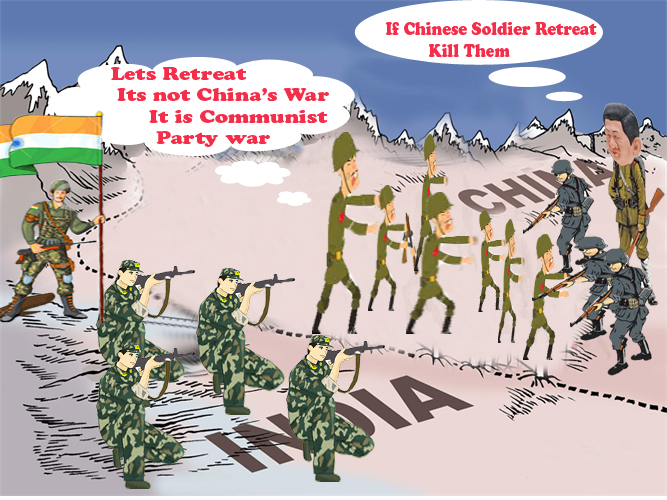 Is it a simple case of Euphemism of the Uninspired, or is an outcome of the repeated drubbing received by the CCP leadership, in Ladakh, at the hands of Indians.

Regarding preferential treatment of military personnel from the state and society, the draft also added that China will establish a military welfare benefit guarantee system that is compatible with the military profession and coordinated with the development of the national economy.

Xu believes this guarantee system will prompt military personnel to be more professional(are they suspected to be not professional now?), allowing them to enjoy better preferential treatment in accordance with the economy.

That is as close to buying-off Patriotism from own citizens, as it can ever be.

Answer lies in another subtle statement made by a top CCP office bearer.

PLA devoted to Communist Party?; not to the Nation China!

Fighting not for sovereignty of China, but for pockets of CCP?

If military personnel have a sense of honor, they can make even greater contributions to the country when a war breaks out and in safeguarding national sovereignty, security and development interests.

Is it that any citizen of a righteous nation, who shall not have Sense of Honor for their country?

They shall have honor for China, but not for CCP. Why?

For that, we shall have to delve further into the history of Communist China, not too far back, but say a peek of China, 100 years before now.

Warlord Era of the 1920s China

In October 1911, the ruling dynasty was overthrown in a revolution know as the Double Tenth. The imperialists lost control of the military; soldiers in Wuchang revolted and rebellion spread quickly. Most provinces then declared themselves independent of Beijing, and independent Province rule in China was under way.

The imperial government attempted to use the former influential general of the Northern Army, Yuan Shikai, to suppress the rebellion, but he double-crossed them, arranging a deal with Sun Yixian(a democrat in exile in the US). Sun agreed for Yuan Shikai to be President of the new republic in February 1912, in exchange for the end of Manchu Imperialist rule in China, and formed the political party, the Guomindang (GMD).

‘The Double Tenth was a triumph of regionalism-federalism. It represented a particular phase in the long-running contest between central imperialist autocracy and local autonomy of federal-democrats. However, There was no real introduction of democracy, and most former imperial officials kept their positions. Yuan ruled China as a military dictator from 1912 until 1915, on behalf of the Imperialists.

With the death of Yuan, China came out of the grips of Imperialists.

They ran their territories independently, organizing and taxing the people in their domains. They had their own laws and even their own currencies. Then came a period of prosecution in lives of rural peasants and Chinese population.

After the death of Sun in 1925, a democrat general took over leadership of the GMD, General Jiang Jieshi. Jiang was a committed nationalist, and had enthusiastically joined the GMD.

Present communists, the CCP evolved from the Imperialists, who realized they have to convert the federal warlords, to a novel platform other than democracy: so that they still can maintain their imperial rule. Hence what was then borrowed, was from the neighboring Soviet Revolution, in form of Communism.

Jiang had studied in Moscow in 1923, and then ran the Whampoa Military Academy, which was set up and funded by the USSR to train GMD officers. Despite his Soviet links, however, Jiang was not a communist. Indeed, he became increasingly anti-communist, and began his leadership of the GMD by removing communists from key positions in the party. He stopped short of breaking off the alliance with the communists/the imperialists.

False front created by CCP, resulted in destruction of warlords, however what had united the CCP and the GMD, i.e. the fight against the warlords was over, and ideology divided the two parties. The success of the Northern Expedition had been not only due to nationalist ambitions, it was also because of the communist promise of land to the peasants and industrial ownership to workers.

What was the promise of democracy and industrialization by Jiang’s nationalist forces, was countered by CCP-imperialists promise of lands to peasants, and industrial ownership. We know the same never materialized, land and industries belong to state now, and not to masses, this is how Imperialist-CCP fooled all in the civil war, that resulted in Nationalists fleeing to Taiwan.

In this ruse, PLA was created as the armed wing to resist Nationalist and military, not to further sovereignty of China, but to further aims of CCP communist party officials, who were the earlier Manchu Imperialists.

Conscription by CCP during civil war, was a deadly affair, in which men were kidnapped for the army, rounded up indiscriminately by press-gangs or army units among those on the roads or in the towns and villages, or otherwise gathered together.

Many men, some the very young and old, were killed resisting or trying to escape. Once collected, they would be roped or chained together and marched, with little food or water, long distances to camp.

Any withdrawal was met by barrage of fire from the barrier troops, to discourage desertion, since Chinese troops of PLA found little reason in killing their fellow nationalists. That was a crude way of winning a Civil War, even though by attrition, does that stand true, when they are unnecessarily pitted against Vietnamese, Philippinos, Mayanmar , Chinese Nationalists of Taiwan or battle hardened Japanese, Australian, US or Indian Armed Forces?

PLA Soldiers Laying down their Life for Grandiose-Ego of Xi Jinping?

Once control over all of China was won and consolidated, and the proper party machinery and instruments of control were generally in place, the Communist-Royal Imperialists launched numerous movements to systematically destroy the traditional Chinese social and political system, so they cannot be challenged in any near future.

This resulted in final, total collectivization of the peasants and the so called “Great Leap Forward”, wherein instead of giving ownership of land and wealth, they destroyed the agricultural system, causing the world’s greatest recorded famine: 27,000,000 starved to death

Because it was not the common man Chinese’s war. It was war for the Cruel Chinese imperialists-turned-Communists, to stamp out Chinese nationalists and get their Imperial rule back in China, in garb of communism.

This is what Xi Jinping is falling back to, after a gap of 100 years. Not because sovereignty of China is threatened in any manner. But to satisfy Grandiose-Ego and ostentatious world-domination fantasy of another imperialist Xi Jinping, posing again as a Communist.

Instead of gaining ascendency in terms of technology, tactics, superior diplomacy, CCP aims to used crude middle age tactics like in ladakh, and make the PLA soldier a scapegoat. Chinese soldier in Ladakh is not fighting for Sovereignty of China but for corruption and self-furtherance of CCP communists like Xi Jinping.

And he knows, India has through centuries respected other’s sovereignty and defended its own ruthlessly. Hence question of Honor of serving China is not at stake for  soldier in Ladakh, but what is at stake is fantasy ridden Global Domination fantasy of Xi Jinping. He is not going to put his life at stake, for a stupid man’s fantasy, even if that nut case is his President Xi Jinping.

Xi Jinping is adamant on increasing that tally manifolds, not to be killed in action, but to be massacred by its own CCP Communists.