China to strike US bases in Indo-Pacific, aircraft carriers in war over Taiwan 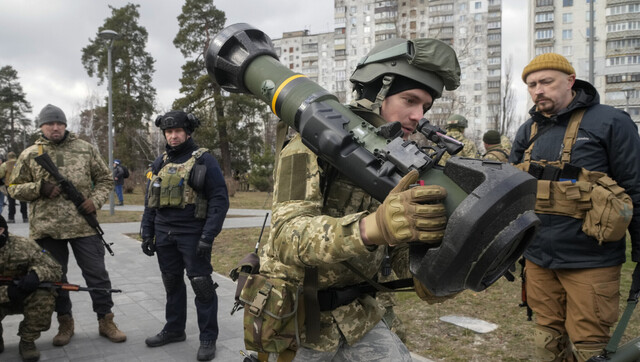 The sabre-rattling and muscle-flexing between the People’s Republic of China and the United States over Taiwan reached boiling point in the last few weeks.

After US President Joe Biden said in Japan on 23 May that America would militarily intervene if China tries to annex the island country by force, a furious Beijing shot back within hours warning America to be “cautious in words and deeds” and asking it to “earnestly follow the ‘One China principle”.

The White House immediately denied any change in its ‘Once China’ policy — i.e. that the Republic of China, or Taiwan, is part of China — in another denial of Biden’s oft-repeated gaffes on military intervention on Taiwan’s behalf, including the one made during a CNN town hall in October 2021.

The very next day, while Biden was attending a Quad summit in Tokyo, four Chinese and two Russian strategic bombers, Xian H-6s and Tu-95s, and an Il-20 electronic intelligence aircraft conducted a joint patrol over the East China Sea and the Sea of Japan for several hours in a show of strength.

Chinese President Xi Jinping has often said that Beijing could use military force for an “unavoidable” reunification with Taiwan, whose “independence is a reversal of history and a dead-end road”.

Chinese defence minister Wei Fenghe reiterated Xi’s stand during a meeting with his US counterpart Lloyd Austin at the Shangri-La Dialogue in Singapore on 10 June. Warning the US defence secretary that China would “not hesitate to start a war”, he said, “Taiwan is China’s Taiwan… If anyone dares to split Taiwan from China, the Chinese Army will definitely not hesitate to start a war no matter the cost.” In an aggressive speech delivered to the summit on 12 June, Wei repeated China’s determination to “fight to the very end” to stop Taiwanese independence.

PLA has transformed by learning from US wars

Though the possibility of a Chinese attack on Taiwan and an American counterattack is remote for now, notwithstanding Biden’s gaffes or statements on Taiwan, the US will think several times before engaging with the People’s Liberation Army (PLA).

Though the Taiwan Relations Act, 1959, states that the US shall “maintain the capacity” to resist any “resort to force or other forms of coercion that would jeopardise the security or social or economic system of the people of Taiwan”, military intervention by America against China would be agonisingly long and catastrophic for the region.

“Neither Beijing nor Washington is likely to have the upper hand after the first week of the conflict, suggesting that it would eventually become a protracted conflict,” according to Washington DC-based think tank Centre for a New American Security (CNAS), which partnered with US lawmakers, former Pentagon officials and China experts in organising a 2027 hypothetical war game in April.

Raising the possibility of Beijing using nukes, the CNAS warned: “The war game demonstrated how quickly the conflict may escalate with China and the United States crossing red lines.”

By the time the Russia-Ukraine War gets over, Beijing would have gained sufficient knowledge from the military mistakes of Moscow, its logistical nightmare and lack of coordination in the initial phase of the war, how to prevent them and plan a fool-proof attack on Taiwan — like it did after the two Iraq wars.

Why Russia has been unable to defeat Ukraine despite gaining enough combat experience in Georgia, Chechnya, Syria and Crimea will be a valuable lesson for China. In fact, according to reports, Chinese military experts are discussing the reasons for the initial Russian setbacks and offering suggestions.

China will learn from Russia’s miscalculation in the urban warfare in Ukraine before launching a ground attack considering that Taiwan’s 24 million population is concentrated in dense urban areas like the capital Taipei. Besides, the vast difference between the size of Taiwan (36,197 sq km) and Ukraine (603,548 sq km) will be another factor in China’s favour with its forces not facing the same difficulties in controlling areas as faced by Russia.

“I’m sure the PLA is learning from what they’re seeing [in Ukraine],” Thomas Shugart, a former US Navy submarine captain and now an analyst at the Centre for a New American Security, told CNN. “You can read open-source translations of their strategic documents. They learned very carefully from what we did in Desert Storm and Kosovo.”

One of the earliest war games planned by American nonprofit global policy think tank RAND Corporation in the early 2000s to find out the winner in a US-China confrontation over Taiwan 10 years later revealed that Beijing would use what the Pentagon refers to as A2/AD (anti-access, area denial) to prevent an Iraq-like American military build-up.

RAND came to this conclusion after studying classified US intelligence on Beijing’s military plans and weapons programmes that also showed how Beijing had minutely studied the two Iraq wars and transformed the PLA.

Before Operation Desert Storm, the PLA’s military strategy mainly focussed on countering the enemy with its massive ground forces. The US coordination between its army, air force and navy and allies, the ‘shock and awe’ techniques that pulverised the Iraqi military, the precision bombing, the electronic warfare, and a modern command, control, communications, computers, intelligence, surveillance, and reconnaissance (C4ISR) system jolted China.

In 1993, then-president Jiang Zemin coined the phrase “local wars under modern conditions” — a development of Deng Xiaoping’s term ‘local war’ — and directed the PLA to rehaul itself on the lines of the US techniques used in the Gulf War. His successor Hu Jintao went further and asked the Red Army to “win local wars under informationised conditions”.

In the next two decades, “informationised warfare” became the guiding force of the PLA’s metamorphosis into a modern, tech-savvy military with an extensive focus on cyber, space and electromagnetic warfare — especially under Xi. In 2015, Xi announced the reduction of the 2.3 million-strong PLA by 300,000 troops to establish the PLA Strategic Support Force, the cyber, space and electronic warfare service branch.

David Ochmanek, a senior RAND analyst and former deputy assistant secretary of defence for force development, remarked that the US was defeated by China in every Taiwan war game because “in that scenario, time is a precious commodity and it plays to China’s strength in terms of proximity and capabilities”.

In case of any conflict with the US, the PLA will rely on its space and airborne surveillance and reconnaissance, gigantic arsenal of precision-guided longest-range missiles, submarines, militarised man-made islands in the South China Sea (SCS), PLA Air Force (PLAAF) and PLA Navy — which is the largest in the world with 360 combat ships as against 300 of the US — to attack the American bases in Western Pacific (Guam) and the Indian Ocean (Diego Garcia), ports and aircraft carriers in the region.

Another “eye-opening” Pentagon war game based on 2030 showed in 2020 that the US would not be able to defend Taiwan from a Chinese invasion and suffer “capital losses” with the PLA targeting Guam. US defence sources told The Times that every US base in the Indo-Pacific is at risk of a Chinese attack.

Taiwan is the “most volatile issue” between the two superpowers, Bonnie Glaser, director of the China power project at the Centre for Strategic and International Studies (CSIS), told The Times and warned that the problem could trigger a nuclear war.

In 2018 and 2020, two other war games showed the same results with China targeting Guam. The 2018 war game revealed that the US military will lose fast if it doesn’t change course considering the Chinese advancement in military technology and missiles.

“After the 2018 war game, I distinctly remember one of our gurus of war gaming standing in front of the Air Force secretary and chief of staff and telling them that we should never play this war game scenario [of a Chinese attack on Taiwan] again because we know what is going to happen,” Lieutenant General S Clinton Hinote, deputy chief of staff for strategy, integration and requirements, United States Air Force (USAF), told Yahoo News in an exclusive interview in March 2021.

In the September 2020 war game, less than a year after the Covid-19 outbreak, China used biological weapons to attack US bases and warships in the Indo-Pacific and invaded Taiwan under cover of a military exercise like the Russian build-up ahead of the Ukraine invasion. The simulation ended with Chinese missiles hitting US bases and warships in the region and an aerial blitzkrieg and amphibious onslaught on Taiwan.

Besides, considering that the Quad is not a NATO-like military alliance in the region, China will not face a united front of European nations like Russia is facing in Ukraine. Except for the US, the other members of the Quad, especially India, will not be willing to assist Taiwan.

On 11 June, Vice-Admiral Biswajit Dasgupta, Flag Officer Commanding-in-Chief of the Eastern Naval Command, made it clear at the Shangri-La Dialogue that the Quad is “not a military alliance” for India.

Besides, it will be difficult to supply arms and ammunition to Taiwan because of its geographical proximity to China as Beijing could easily target the consignments. According to USAF General Mike Holmes, “With Ukraine, you have borders that you can move things across. Taiwan’s a long way off.”

In case, the US intervenes militarily, China’s response will be a devastating pre-emptive attack in the first few days. “Many Chinese observers suggest that missile strikes on [US] air bases would be part of the opening salvos of a war,” RAND said in 2019.

China will unleash a volley of missiles — the most varied stockpile of 2,000 land-based, cruise and anti-ship weapons in the world — on Guam and Diego Garcia.

After the conclusion of the CNAS war game, which simulated China attacking Guam and Japan in the first few days, Hinote said that Beijing would adopt a Pearl Harbour-like bombing strategy. “The attack is designed to give Chinese forces the time they need to invade and present the world with a fait accompli,” he told the Air Force Magazine.

China has the most massive and diverse arsenal of missiles that threatens American ships in the Western Pacific, former US Indo-Pacific Command chief Admiral (retired) Harry Harris said in March 2018. “We are at a disadvantage with regard to China today in the sense that China has ground-based ballistic missiles that threaten our basing in the Western Pacific and our ships,” he said in a testimony before the US Senate Armed Services Committee.