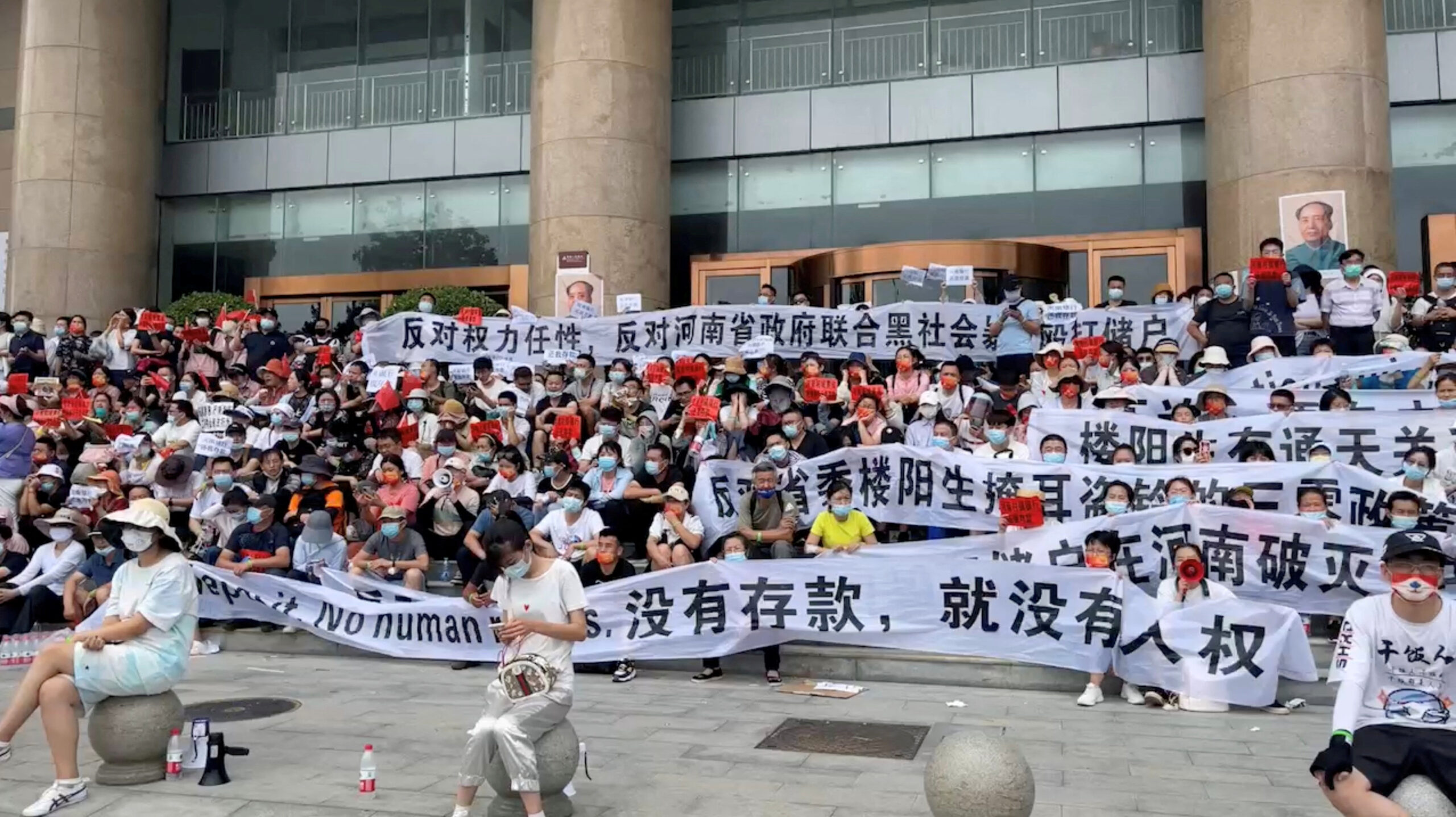 Confidence in the safety of Chinese banks has been badly shaken by the failure of several small banks in Henan Province in April this year. In terms of their assets of about 40 billion yuan ($6 billion) and the number of customers, roughly 400,000, the shuttered rural banks are minions in China’s financial system.

The implosion of these poorly supervised and likely corruption-ridden financial institutions should not be surprising. But how local authorities handled the fallout is shocking even to the most jaded observers of China’s political scene.

Instead of compensating the depositors, who are entitled to up to 500,000 yuan, according to government regulations, officials in Henan have done everything imaginable to silence them.

They initially restricted the movement of the depositors by turning the COVID test code on their smartphones red, which effectively made it impossible for them to take public transportation or even drive their own cars. A public outcry forced the Henan government to abandon this abusive tactic.

But when several hundred depositors unable to gain access to their savings in the failed banks gathered on July 10 to protest in front of the People’s Bank branch office in Zhengzhou, capital of Henan, local officials sent in a large number of thugs who viciously assaulted the depositors, with uniformed police officers looking on.

Plain-clothed security personnel pulls on a demonstrator’s shirt while dragging him away during a protest over the freezing of deposits by some rural-based banks outside a People’s Bank of China building in Zhengzhou on July 10.   © Reuters

This scandal should alarm investors not simply because of the brutal tactics used by local authorities eager to cover it up but because of the circumstances under which these small banks failed.

Ever since China began to binge on debt to fuel its growth in 2009, many have wondered how long the party could go on. To the chagrin of many bearish observers, predictions of a financial crisis have not panned out. Today, China’s banking system is still standing despite a debt-to-GDP ratio of 264%.

Perhaps because Beijing seems to be able to defy financial gravity, fewer people these days worry that its ballooning debt could unleash a systemic crisis. But there are many warning signs indicating that China may face a debt reckoning soon.

Weak supervision, poor risk management and corruption that likely drove the small rural banks in Henan into insolvency are systemic among the country’s nearly 4,000 small and medium-sized banks with nearly $14 trillion assets.

It is highly likely that other similar banks will fail soon. By pure coincidence, when Henan authorities were cracking down on the victims of bank failure there, authorities in Shanghai had put on trial, in secret, a former billionaire who allegedly controlled a medium-sized bank in Inner Mongolia and used it to fund various illicit schemes. When the government seized the failed bank in 2019, the bailout cost several billion dollars.

If a large number of small banks fail together, such an event could produce a chain reaction threatening the stability of the financial sector. Their counterparties and lenders, especially bigger banks, could suffer massive losses. Confidence in China’s shadow banking system, through which small banks attract funds with a higher interest rate, will likely evaporate.

The chances of such a financial meltdown are much higher today than before. One of the reasons that China has avoided a financial crisis in the last decade is that its economy managed to grow at a reasonably high rate, averaging 6.8% a year from 2011 to 2020. A faster-growing economy normally makes it easier to manage or even conceal the debt burden.

But as the Chinese economy is now slowing down rapidly, in part due to Beijing’s zero-COVID policy, the debt bomb is ticking much louder.

The most ominous warning light is clearly China’s debt-ridden real estate sector. China Evergrande Group, the country’s largest real estate developer, which has borrowed more than $300 billion, has already defaulted on its bonds. More defaults seem likely because Chinese developers are on the hook for $13 billion in dollar-denominated bond payments in the second half of this year.

China’s debt-laden local governments are also facing grim prospects. Declining income from land sales because of the crisis in the real estate sector and falling tax receipts are expected to cause a 6 trillion yuan shortfall, roughly $900 billion, in local government revenues this year. Local government financing vehicles that have borrowed heavily from banks or issued bonds will have great difficulties servicing their debt.

Large banks in China are in trouble as well. They have lent tens of billions to poor countries as part of China’s ambitious Belt and Road Initiative. A significant portion of their credit portfolio is likely to become nonperforming as their borrowers are unable to service the debt due to the global economic downturn.

The most recent economic implosion and the collapse of the government of Sri Lanka will likely force their Chinese lenders to write off a large portion of the loans. If big Chinese banks themselves face rising nonperforming loans abroad, they will be less able to help bail out insolvent small or medium-sized banks at home.

It might be possible for China to dodge another financial meltdown this time. But if local officials have to hire thugs to attack bank customers trying to get their money back, investors should brace for far worse days ahead for China’s banking sector.