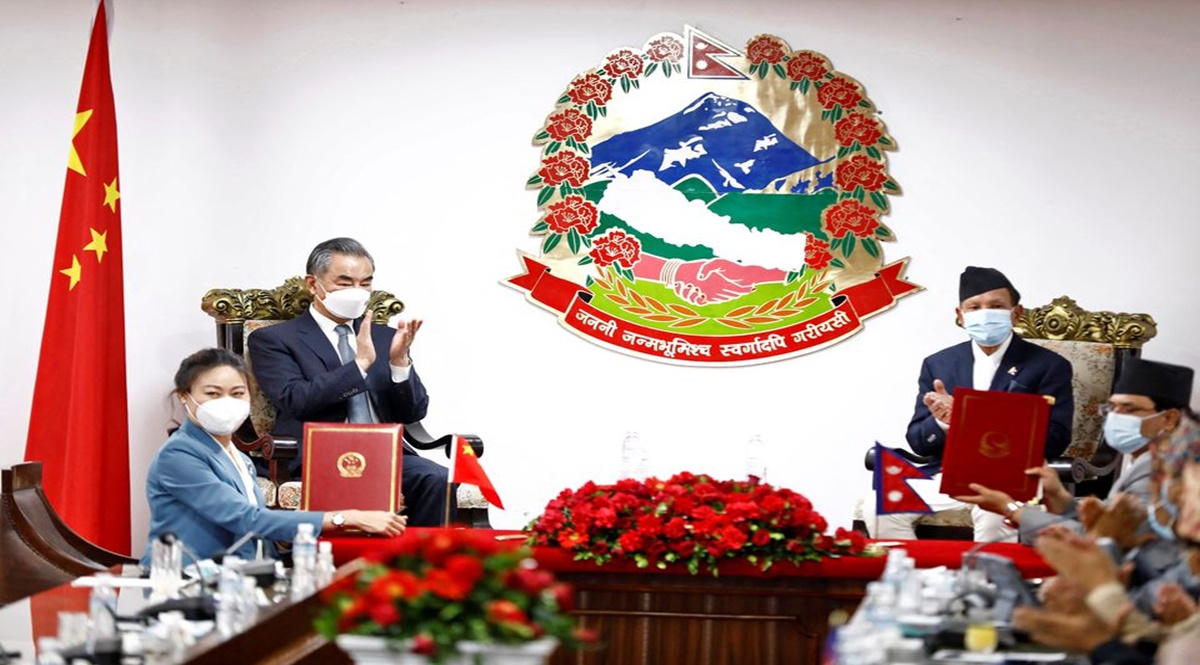 “The strategic location of Nepal between India and China lends itself to the fact that the slightest stir in Nepal will have a residual effect on India and China, especially in Tibet. Apart from the economic and trade interest of both the countries, they also have an interest in containing US influences in the region. Both countries consider the other competitors, and there is a considerable trust deficit between them post the 1962 war.”

Tibet became strategically important for China and Nepal since both wanted to keep Nepal within their respective spheres of influence. From the south, “Nepal is the gateway to the Tibet Autonomous Region (TAR), which plays a vital role in China’s South Asia outreach and the gateway to the Indo –Gangetic Plains of India, in many ways the heartland of India. The Tibet issue, China’s primary security concern, is a significant determinant of Chinese foreign policy towards Nepal. In that context, the Khampa rebellion in Tibet and its use of Nepal’s territory in 1959 is a case in point. The Chinese have always considered Nepal the soft underbelly of Southern Tibet and are now determined to keep it under their influence. For much of the 20th century, Nepal was a protectorate of the British Colonial system and, later, within India’s security system.

China remains sensitive to “Nepal being used by external powers to challenge its strategic interests in Tibet, especially by the United States in its larger strategy of encircling China.” During the 1960s, “there were several demonstrations in Kathmandu and Tibet by Tibetan expatriates who had their homes in Nepal. This led China to be suspicious of this external engagement of Nepal as she was concerned inimical foreign forces were engaged in instigating anti-China activities in Tibet, using Nepal as their base.

The Chinese Creep into Nepal: The Clear and Present Danger

“China in many things at once in Nepal today. It is a superpower, a beneficent aid-giver, a friend in need, an essential provider, a demanding neighbour, an older brother, a competitor, a model of development and a vision of a developed future. China is changing regional and global dynamics in an unprecedented way than Nepal. As China declares itself on the world stage, Nepal wants to tag along for the ride. Relations have never been better than in the contemporary era, but they need to be sustained, nurtured and developed as they evolve. It is in Nepal’s interest to do so, and imperative to do it in a way that acknowledged its aspirations.” – Amish Raj Mulmi, All Roads Lead North: China, Nepal and the Contest for the Himalayas.

The prime motive of China from the 50’s to the late 80s (1955 to 1989) was to create infrastructure in Nepal. China openly exhorted Nepali assertions of Independence vis India throughout the period up to 1978. China also promised Nepal to protect its territory from any third country. China directed intense anti-Indian propaganda into Nepal.

The second phase of Chinese policy focused on ending Nepal’s over dependence on India. Till 1995, trade between China and Nepal was just 0.7 per cent of Nepal’s trade. The rest of 99.03 per cent of its trade was with India. China was conscious of the geographical and cultural proximity between India and Nepal, and therefore planned new routes for trade with  Nepal. China encouraged Nepal to adopt the equidistance policy between India and China. In the early years, Chinese assistance was pledged in projects, and several financial involvements were initiated. From the mid- 90s, the Chinese Government has been pledging to grant assistance to Nepal under the economic and technical cooperation programme to implement mutually acceptable development projects. The volume of such aid had been averaging to the tune of 80 million Yuan every year.

In September 2019, delegations from Nepal and China gathered in Kathmandu and finalised the text of a new Trade and Transit Protocol, destined to actualise the Trade and Transit Agreement the two sides had earlier concluded in March 2016. This protocol granted the use of four Chinese seaports, Tianjin, Shenzhen, Lianyungang, Zhanjiang, as well as the dry ports of Lhanzin, Lhasa, Xigatsê to Nepal for third-party trade. All six border crossings between the two countries were included in the protocol, which allowed Nepali vehicles to enter Chinese territory to ferry goods without designating specific routes.

With the signing of this new protocol with China, Nepal was looking at four major advantages. First, while these new connectivity protocols would firstly not break Nepal’s strong cultural, religious, social and military ties with India, secondly, it would loosen Nepal’s longstanding dependence on India and thirdly, India would no longer be Nepal’s sole conduit to the oceans. This Nepal felt was bound to have a sovereignty-enhancing effect. With this second option available and an enhanced partnership with China, Nepal feels that it gains the ability, in principle, to offset future dependence on India and pursue independent foreign and domestic policies.

Second, these new links will increase Nepal’s bargaining leverage, putting it in the position of arbitrating a bidding war between China and India. Further, a complementary agreement between Nepal and China eyes a Kathmandu-Gyirong railway, and China has committed to extending the Lhasa-Xigatsê railway to Gyirong by 2020. At the railhead, this line would further connect Nepal to the Gyirong Port and Economic Cooperation Zone, which is likely to link with China’s vast road network and the largest dry port in the world.

This protocol introduced simplified customs procedures, allowing Nepalese consignors to enter China with just an electronic invoice for the goods. China plans to further adopt an electronic tracking system, which would enable Nepal-bound containers clear at locations near the border. Nepal felt it would allow its traders access to new markets in East, Southeast Asia and beyond. Moreover, this China route would help reduce shipping times and costs for particular origin or destination points. Lastly, with increased goodwill from both powers, Nepal may find the opportunity to realise its aspiration to develop into a “bridge” between China and India.

China’s growing influence in Nepal, especially towards the Terai bordering India, where it has been given the responsibility of creating or remodelling Lumbini into a world peace city, could be a significant challenge for India to maintain a balance between the two neighbours.

It is ironic that China, a country which has done its utmost to destroy Buddhism and peace in Tibet, has been charged with building infrastructure surrounding Lumbini, a UNESCO World Heritage Site, to attract Buddhist pilgrims worldwide. Lumbini is just 30 kilometres from the Indian border town of Sunauli and at a highly strategic and critical part of India’s Indo-Gangetic heartland. A Chinese company bringing in Chinese labour, which probably would be PLA in disguise, is a clear and present danger for India, regardless of the plan to transform Lumbini, the birthplace of Buddha, into an international tourist hub and a ‘Mecca’ for Buddhist pilgrims.

Nepal can neither find an alternative to its centuries-old relations with India nor isolate itself from China and its prosperity. Nepal’s only aim is to extract maximum benefit from her neighbour’s economic prosperity and, therefore in her foreign policy, has stated that ‘Neither of our neighbours should be suspicious of our relations with each other.’
Chinese interests in Nepal are Tibet-centric, and her objectives in Nepal are the security of Chinese interests in Tibet. Given the earlier regular flow of Tibetan refugees into Nepal and India every year, China’s objective is to nullify any negative fallout.

The 1950-1951 invasion of Tibet by the People’s Liberation Army (PLA) resulted in significant changes in China’s relationship with Nepal. China ordered restrictions on the entry of Nepalese pilgrims and contacts with Tibet and increased its support for the Communist Party of Nepal, which opposed the continuation of the Nepalese monarchy. Mao repeatedly stated from 1950 onwards that Taiwan, Tibet, and the Hainan Islands were Chinese territories and would be repossessed in time. The predominant trait in this claim was the sudden appearance of existing maps showing large parts of Korea, Indo-China, Mongolia, Burma, Malaysia, Eastern Turkestan, India, Tibet, Nepal, Sikkim, and Bhutan as Chinese territories. Later, Mao stated that Tibet was the palm of a hand and its fingers were Ladakh, Sikkim, Nepal, Bhutan, and the North-East Frontier Agency, now the Indian state of Arunachal Pradesh. Worried by this statement, in 1952, King Tribhuvan of Nepal invited an Indian Military Mission (IMM) to re-organise and modernise his army, which earlier was an irregular part-time force. When not on duty, the soldiers followed other professions. They were ill-equipped and ill-paid and only called periodically for parades in Kathmandu.

However, later, on October 24, 2005, when India, US and UK had suspended military assistance to Nepal in February 2005, post-King Gyanendra seizing power, China stepped in and pledged $989,000 to Nepal, essentially to assist the Government of Nepal to fight the Maoist insurgents in Nepal, which it referred to then as anti-government forces. In September 2008, during the then Nepalese Defence Minister, Ram Bahadur Thapa’s visit to China, Beijing provided Rs 62.5 million as military aid to Nepal and requested that Nepal restrict any adverse activities against China on its territory. It was a clear indication to the Maoist Government of Nepal that they had the backing of China against India. Later during the same visit, China allotted US $2.6 million as military assistance for Nepal’s security sector. In December 2009, China granted non-lethal” military hardware to Nepal including logistics and training to the Nepal Army worth 20 million Yuan, and 800,000 Yuan towards constructing a ‘friendship building’ along the Nepal – China bn December 2009, Defence Minister Bidhya Bhandari’s request to extend the Nepal army’s hospital at Kathmandu was accepted and completed. This request had earlier been asked from India, but since India did not assist Nepal, the Nepali army requested China, which ended the project entirely.

There is little doubt that India has lost strategic space to China in Nepal. Some reckon the era of ‘special relations between India and Nepal is nearly over as China makes steady inroads into every aspect of Nepalese life. There has been a truly spectacular rise in Chinese influence and a corresponding fall in Indian sway in Nepal. The 2015-16 India-inspired blockade of the India-Nepal border, imposed, in part, due to India’s displeasure over the new constitution Nepal had just promulgated, seems to have been the catalyst.

At US$79.26 million, “China accounts for nearly 60 per cent of foreign direct investment (FDI) commitments received by Nepal in the first half of the current fiscal year beginning mid-July 2017. India is a distant second with US$ 36.63 million, followed by the US and Japan. As China closes in, it severely restricts the clout India once enjoyed in the peripheral countries within her neighbourhood. However, of all the peripheral countries, the geo-strategic location of Nepal gives it particular importance since it sits at the head of the critical Indo – Gangetic plains, India’s heartland, and provides a crucial buffer with China.

In this third and most aggressive phase, China has adopted a posture to weaken India’s hold on Nepal. This phase continued the agenda of the first and second phases, but the focus increased more towards encircling India. Apparently, China is courting the Nepalese Maoists and rendering political and material support to the Indian Maoists, aiming to overthrow parliamentary democracy through an armed struggle. The sheer political capital of the Maoists, and the anti-China protests of March 2008 in various parts of Tibet, including Sichuan, underscored the importance of Nepal to China, mainly because Nepal gives sanctuary to approximately 20,000 expatriate Tibetan communities.

Nepal has become the latest proxy battleground between the regional powers, India and China, to demonstrate their influence. New Delhi is increasingly getting worried about China’s creeping influence in Nepal. China has managed to project itself as a disinterested neighbour and an alternative to ‘Big Brother’ India. However, even as Prachanda spoke of the need to review the Indo-Nepal Friendship Treaty of 1950, Nepal accepted a draft of a ‘Peace and Friendship Treaty’ submitted by China.”