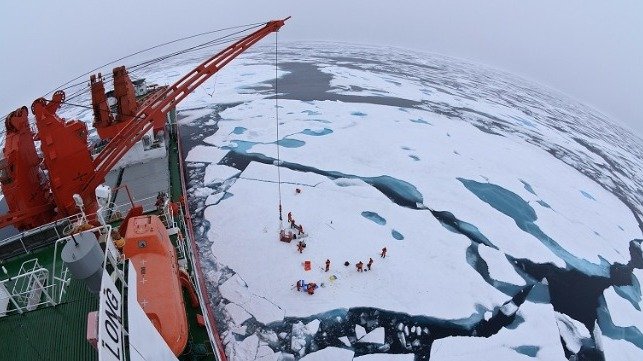 The Antarctic Treaty System, which has governed affairs in Antarctica since 1961, is struggling under the weight of great-power competition. Through gaps in governance frameworks, states are exploiting the treaty and its subordinate protocols to pursue their national interests.

Antarctica offers great treasure in natural resources, scientific opportunity and national prestige. Antarctica’s ‘prizes’ include fishing stocks, bioprospecting opportunities, climate science analysis and hydrocarbons (with potential reserves of between 300 and 500 billion tonnes of natural gas on the continent and potentially 135 billion tonnes of oil in the Southern Ocean).

Article 1 of the Antarctic Treaty declares that use of Antarctica is for scientific observation and investigation—for peaceful purposes only. Despite the treaty suspending the claims of the seven original claimants (Argentina, Australia, Chile, France, New Zealand, Norway and the UK), the US and Soviet Union (as additional, non-claimant, original signatories) exercised the right under the treaty to stake a claim at a later stage. In effect, the treaty froze the issue of territorial sovereignty.

Now, however, the great powers are refocusing their attention on achieving their strategic objectives by alternate means as the treaty’s protocols come up for renewal in 2048. What could change between now and then? As stakeholders with voting rights on continental governance, the consultative parties to the treaty might decide to keep its environmental protocol and continue to prohibit mining and militarization. But they might not.

China’s disregard of the 2016 arbitral tribunal ruling on its South China Sea claims, coupled with its intense competition for resource access and assertive actions in international governance forums, suggests that a watch-and-wait approach in Antarctica is a high-risk one. Since the establishment of its first Antarctic research station, the Great Wall, in 1985, China has expanded its presence on the continent. Three of the country’s four research stations are based within the Australian Antarctic Territory, and a fifth is under construction on Inexpressible Island in the Ross Sea. China’s emergence as a polar power includes substantial investment in icebreakers and continental airstrips to provide year-round access.

The Chinese government’s strategic approach to Antarctica is at the level of national security policy. Official documentation incorporates Antarctica and the Southern Ocean into the state’s expanded conception of domains for influence and dominance, beyond the Indo-Pacific. Beijing recognizes no existing claims to the continent and pursues a strategy that maximizes its own national interests there.

China’s polar affairs are governed through the State Oceanic Administration, which sits directly under the Ministry of Natural Resources. The Polar Research Institute of China nominally administers scientific activity on behalf of the State Oceanic Administration, yet its reach covers “polar politics, economy, science and security.” Since 2011, Antarctic priorities have been set at the national level through the Chinese Communist Party’s five-year plans, which explicitly characterize the polar regions as a “new strategic frontier.”

The CCP seeks to affirm China’s international legitimacy on the continent on the one hand and maximize domestic support for Chinese Antarctic activities on the other. China thus has “two voices” targeting separate audiences. Externally, China portrays itself as conforming to the treaty system’s institutions with a primary interest in science. Beijing has accused Antarctic forums of being a “rich man’s club” dominated by the US, claiming that others are portrayed as “second-class citizens.” This ignores the fact that China has equal voting rights as a consultative party. The CCP narrative is that China has been denied its rightful place in the international order.

Domestically, President Xi Jinping’s November 2014 speech, given aboard the Xuelong icebreaker then docked in Hobart, declared that China wanted “to become a polar great power.” China then asserted its “right” to polar leadership in 2015 through its national security law, emphasizing the state’s interests in “new frontiers,” including Antarctica and the Arctic, among others. By listing these domains in a security context, China laid a domestic legal foundation to protect its potential future rights in them.

“Science” is deployed as a narrative tool to legitimize China’s expanding presence on the continent. A vital part of this claim is, of course, stressing the importance of climate change research and the need for cooperation from all powers on this front. The polar regions are fundamental to this effort. At the same time, however, Chinese scientific and academic institutions participating in Antarctic science are essentially controlled by the CCP and integrated with China’s civil–military complex.

Xi has explicitly stated that China’s scientists should have the “correct political inclination” and be “imbued with patriotic feelings.” Chinese influence in Antarctic forums reinforces the broader Chinese narrative of its natural right to leadership in international governance. On top of this, the People’s Liberation Army has for some time highlighted the likelihood of polar regions being spaces for “new geopolitical conflict.”

New Zealand China expert Anne-Marie Brady’s research highlights China’s Antarctic bathymetry activities mapping the Southern Ocean seabed for future shipping and/or submarine movement. China has linked the polar regions to the Belt and Road Initiative in building a “blue economic passage” to secure national interests and to “build China into a maritime powerhouse.” Antarctica and the Southern Ocean represent a natural extension of Beijing’s maritime economics objectives and its drive to access resources and secure associated trade routes and to set the conditions for “dual-use” capabilities to effectively control the region.

China’s failure to comply with Antarctic inspection requirements serves to further weaken the treaty’s original intent. Poor compliance potentially encourages further militarization below the detection threshold. The implications for Australia would be stark if competition with the US and/or Australia were to escalate, and China ramped up its military presence in Antarctica.

Competition on the continent has always involved other players. The US was pivotal in the initial development of the Antarctic Treaty. In brokering the treaty, the US was able to deny sovereignty to other states. US policy reinforces the commitment to use Antarctica only for peaceful purposes and free access for science; however, the US “recognizes no foreign territorial claims” and “reserves the right to participate in any future uses of the region.”

With priorities in other theaters, the US approach to Antarctica has suffered a period of neglect. Funding constraints on US Antarctic science contributions have created space for other countries to assert more dominant roles. The US is now taking an enhanced physical presence, with a 2020 presidential memorandum focusing on new “polar security” icebreakers. The Biden administration has not reversed this direction and how the US contributes to environmental protection in Antarctica in future will be vital.

John Garrick is a university fellow in law at Charles Darwin University and a practicing lawyer in the Northern Territory. He is author and editor of numerous publications on China’s rise, including, with Yan C. Bennett, China’s socialist rule of law reforms under Xi Jinping.