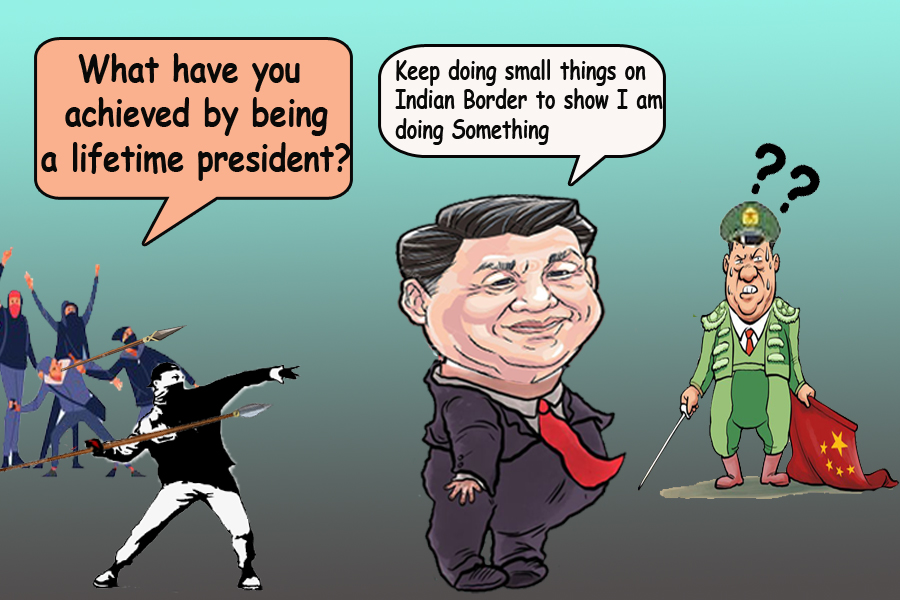 Cambodia had signed a secret agreement granting the People’s Liberation Army Navy access to the Ream Naval Base on the Gulf of Thailand. Much of this attention has been devoted to speculation over what this means in terms of Cambodia’s relationship with China and the United States, and also its potential to augment China’s expanding military presence in the region.

The port was never of Military use for the US and nor can it be for China, given its obtuse proximity to Spartly Island base of China, and how it sinks inside the region as a whole.  Also, the waters off Cambodia’s coasts are not deep enough to be useful to a powerful navy.  These waters, in the Gulf of Thailand, are on average about 50 meters deep, while here at the bay of Kampong Som, the water is only five to 10 meters deep.

Is it just another domestic boast by Xi Jinping, to ward off questions raised on his brawl-leadership style which has all but isolated China economically as well as Strategically?

Of course, China has all the reasons to feel strangulated, not only on its claims over South China Seas, but in South East Asia as a whole.

India Since Joined the Party

The legacy of India’s non-alignment policies was until recently considered the main obstacle to New Delhi’s committing itself to security and defence ties, which in Beijing are perceived as part of Western-led containment against China. However, that has very clearly changed since Beijing has begun to operate in and sail into what for decades was India’s geopolitical and geo-strategic ‘backyard’ in South Asian territorial waters.

While Galwan was a teasing point to China by India, matters came to crossroads at Ladakh in 2020, riding tersely on Pushback against China by the world, over COVID-19.

It proved to be a dangerous crossroads for China, when on June 15th PLA soldiers on the orders of their General (who has since been punished), reneged on the agreed disengagement process and attacked the Indian patrol party which came for verification. Indian Commanding Officer Col Suresh Babu lost his life in the initial skirmish with PLA soldiers who were unmilitary ready with batons wrapped with barbed wire. Seeing their CO going down the reinforcement of Ghatak commandos resulted in hand to hand fight. The space was limited and many Chinese soldiers rushed over a narrow ledge resulting in many of them falling many feet into Galwan river to their death.

20 Indian soldiers lost lives and an unspecified number of PLA troops lost their lives. Indian army estimates 43 PLA soldiers killed while US intelligence estimates PLA causalities to be 35. This incident has led to a complete breakdown of trust and protocol between the Indian Army and PLA, and Indian Armed Forces raging against Chinese PLA, on all fronts.

Up came pushback against China in Ladakh, Indian Navy’s aggressive patrols in the South China Sea, Malacca straits, and coming up in a solid fashion on Quad.

China since 2020 has missed the famous Xi Jinping’s call for attacking Taiwan and occupying it by 2020, to justify his “President for Life” bid. It has come to naught.

Not only alliances are being created around China by the day, Russia also has been noncommittal on any support to China, except in denouncing the US.

With business and foreign companies relocating their production lines out of China, there is nothing that Xi Jinping has to show against his name.

Up comes the Arunachal Border Villages Bogey. Its common Geo-Strategic knowledge that China cannot gather an inch of Ladakh or Arunachal or Sikkim, by force. Being Tibet Plateau, the area is not easy for PLA. It is hostile territory and large deployments for long periods can be costly for PLA. Supply lines pass through narrow bridges and rail lines which can be taken out easily in any conflict. Things are a bit better on the Indian side as the Himalayan range starts on the Indian side and continues for long distances into Tibet. India took advantage of the same and matched every PLA deployment with well-acclimatized soldiers.