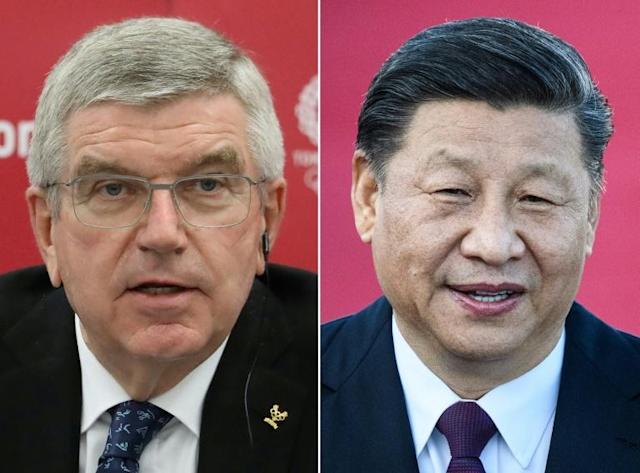 Xi’s meeting with Bach is expected to be the first of several such meetings for the Chinese president – who has not left China for more than two years because of the Covid-19 pandemic – as dignitaries, including Russian President Vladimir Putin, descend on Beijing for the Olympics, scheduled to begin on February 4 and to be held in the capital and the neighbouring province of Hebei.

Xi wore a white mask with a red Chinese flag in the corner as he stood next to a masked Bach at the Diaoyutai State Guesthouse in Beijing, according to agency reports.

Later, the two were shown speaking without masks across tables that were widely separated, Chinese state television images showed.

Xi, according to an official statement, said that after more than six years of preparations and now with everything falling into place, the Olympic Winter Games Beijing 2022 will be held on schedule as promised

“China will honour its commitment to present to the world a streamlined, safe and splendid Olympic Games. This is the first time since the start of the Covid-19 pandemic that a comprehensive global sporting event is held as scheduled. It is a successful example of acting upon the new Olympic motto: ‘Faster, Higher, Stronger – Together,’” Xi said.

Nearly 3,000 athletes from about 90 countries and regions will compete at the Beijing Olympics.

Xi said that in conformity with the “athletes-centred” concept, China has spared no efforts in the construction of venues and infrastructure as well as services for the Games.

“China is confident of ensuring the safety of all Games participants, relevant personnel and the Chinese people,” he added.

The Games will take place from February 4-20 inside a “closed-loop” separating athletes and other participants from outsiders, and tickets will not be sold to the public.

China has all but shut its borders to international arrivals to curtail Covid-19 though a small outbreak of 67 domestic cases – a mix of Omicron and Delta variants – recorded in Beijing since January 15 have put the city authorities on an “emergency” mode.

Xi and Bach talked about Covid-19 countermeasures at the Games and Bach told Xi that “China is now a winter sports country, and this is the start of a new era for global winter sports”, according to a readout on the IOC website.

“Some countries are sending athletes to the Olympic Winter Games for the first time, which fully demonstrates the extensive support of the international community for the Beijing 2022 Games,” Bach said according to the Chinese readout, adding that it was in contrast to the overwhelming international opposition to the politicisation of sports.