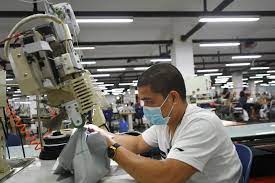 As globalization was gaining steam in the 1990s, Western publics learned about a new concept: offshoring. Even then, it was often unpopular with the public, even as corporate executives gleefully embraced the prospect of cheaper—and less empowered—labor. And China, with its well-trained workforce and growing middle class keen to buy Western goods, was the ideal combination of manufacturer and market. What a difference a couple of decades make. Now companies are trying to move production to friendly countries where they don’t need to worry that they’ll be caught in the geopolitical line of fire. Friendshoring has arrived.

“President Bush is on an eight-day tour of Asia. He’s visiting American jobs,” David Letterman quipped in 2005 about the 43rd president of the United States. Lots of American jobs had indeed left the country—but that was just the beginning. Between 1993 and 2011, the number of U.S. workers employed in manufacturing dropped from nearly 16 million to just over 10 million, and the decline was similar in other Western countries.

Yes, some of the jobs disappeared due to automation, but countless others went to low-wage countries. In 1982, U.S. multinationals had 30 percent of their labor forces abroad; in 2014, the share had doubled to 60 percent. None of these foreign sites was more popular than China, where rapidly improving transportation infrastructure and a workforce with high levels of basic literacy and numeracy for a developing country made it a one-stop shop for manufacturing—the factory of the world.

For corporations, offshoring to China was a financial imperative considering that U.S. manufacturing workers, who earned $20 per hour—or more—could be replaced by workers making less than a dollar an hour. And lots of white-collar Western jobs went to China, too. IBM, for example, moved its global procurement chief and some of its research and development functions there. So enraged were some IBM shareholders at one annual meeting that they called for the company’s CEO to be offshored.

Lots of ordinary Americans, Germans, Italians, Swedes, and others were enraged, too—unsurprisingly so, given that their livelihoods and thus often their identities had been taken away from them. They could retrain, and many did, but offshoring may be the original sin that caused always existing divisions between so-called elites and so-called ordinary people to erupt into the barely manageable divisions that plague Western societies today. It’s hard to see how Donald Trump would have been elected without the legacy of that bitterness.

But companies will continue to run their operations in the locations that make the most financial sense because they’re accountable to their shareholders, not former workers or the wider public, and while a few CEOs may feel a moral obligation to their companies’ home countries, such sentiments won’t come between them and their quarterly results. Besides, as I have highlighted in articles over the past several years, such as here, here, here, and here, global cargo transport is so efficient that manufacturing can take place far from consumers. Offshoring is here to stay—but that doesn’t mean manufacturing in China is. In a June survey conducted by the European Union Chamber of Commerce in China, 23 percent of Western firms said they were considering moving operations away from the country, while 50 percent reported that business in China had become more politicized in 2021 than it had been in previous years.

In its 2019 survey, in contrast, the European Chamber reported that European companies had an “increasingly firm commitment … toward the mature and vibrant Chinese market.” But today, “every company that I speak to at the moment is engaged in rethinking their [China-focused] supply chains,” Tony Danker, the director-general of the Confederation of British Industry, told the Financial Times last week. “Because they anticipate that our politicians will inevitably accelerate towards a decoupled world from China.”

Part of this is pandemic pressure. China’s zero-COVID policy has snarled supply chains and left factory workers locked in their dorms—and shows no sign of ending anytime soon. China’s demographics have also meant a shrinking pool of potential workers, and as the country has climbed into the middle ranks of global income, labor has become more expensive. But Beijing’s growing aggressiveness toward the West and its insistence on maintaining ties with Moscow have also left executives nervous that they could be caught on the wrong side of global conflict. The Chinese Communist Party’s insistence on ideological purity doesn’t help, with party cells now mandatory in foreign companies.

“The only thing predictable about China today is its unpredictability, and that is poisonous for the business environment,” Bettina Schoen-Behanzin, a vice president of the European Chamber, said in a statement accompanying the 2022 survey. “Increasing numbers of European businesses are putting China investments on hold and re-evaluating their positions in the market as they wait to see how long this uncertainty will continue, and many are looking towards other destinations for future projects.”

And most companies are not reshoring; they’re beginning to friendshore. Friendshoring is what it says on the tin: the moving of business operations—whether that be manufacturing, back-office, R&D, or anything else—to friendly countries. “Friendly countries” is, of course, a concept that was until very recently alien to most business leaders. For the post-Cold War generation currently leading Western companies, there are no friendly or unfriendly countries, geopolitically speaking; there are just different markets, some of which are more complicated to operate in because they’re plagued by corruption, violence, or other calamities. These business leaders don’t view their companies as representing the country in which they happen to be based