Connectivity to GDP : The DFC Story 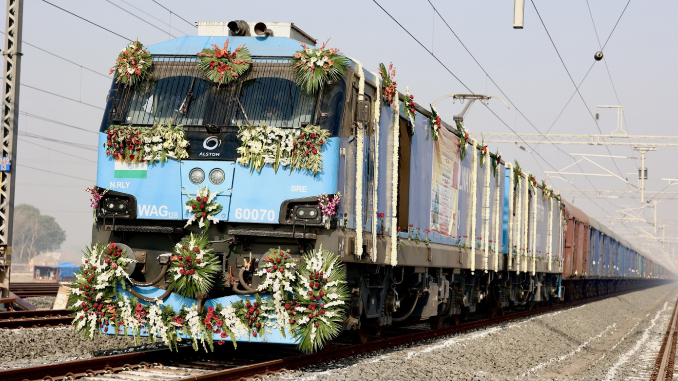 This is about a key component of the aspiration of $ 5 trillion Indian economy by 2025. This involves investment, work and innovation, but above all it involves a vision which can take the GDP up by 10%, by virtue of sheer connectivity.
As a prelude to it, the government has given top priority to speed up and complete long delayed projects.
A project started in 2006 and was supposed to end by 2013, but not even 10% of the work was completed till then. This was the Dedicated Freight Corridor (DFC) project is the largest Railway project currently going on in India with more than 3,300 km of Double line electrified Railway tracks, consisting of 2 routes between Delhi and Mumbai (Western Dedicated Freight Corridor) as well as between Ludhiana and Kolkata (Eastern Dedicated Freight Corridor).
The total cost of construction is Rs 90,000 crores.
This project will literally carry the MASSIVE weight of the Indian Economy in northern, Western and Eastern India in the coming years by running goods trains at 100 km/hr without any obstacles, unlike on Ordinary Indian Railway tracks, where Goods trains are held up to facilitate the movement of passenger trains, leading to Massive delays.
The busy Delhi-Kolkata and Delhi-Mumbai Railway routes are over-saturated and heavily congested with capacity utilization of 110% and 150% respectively. This Massive 3300 km long DFC project will ease up the congestion of these Railway routes drastically.
The pace of the work can be gauged by the fact that two DFC projects of the 351 km Khurja-Bhaupur section of Eastern Dedicated Freight Corridor and 306 km Rewari-Madar section of Western Dedicated Freight Corridor were inaugurated within a gap of 10 days.
With the completion of the 356 km long Western Dedicated Freight corridor (WDFC) Railway track section between Madar (Ajmer, Rajasthan) and Palanpur (Gujarat), the entire 659 km stretch of WDFC between Rewari (Haryana) and Palanpur is open to goods traffic.
This track is separate from that of Indian Railways, and is built by the Dedicated Freight Corridor Corporation of India Limited (DFCCIL), a separate body under the ministry of Railways, at a total cost of Rs 95,238 crores. Only Goods trains will be allowed to run on these massive 3300 km long Railway tracks.
There will be 2 sections, the Dadri(Delhi-NCR) to JNPT port (Mumbai) section of length 1504 kms, which is known as Western Dedicated freight corridor (WDFC) and the Ludhiana(Punjab) to Dankuni (Kolkata) section of length 1839 kms, which is known as Eastern Dedicated freight corridor (EDFC).
The whole purpose of this corridor is to increase the average speed of the goods trains running between Delhi-Kolkata and Delhi-Mumbai, from 25 km per hour to 75 km per hour, increasing the freight train connectivity and reducing the load on the existing Indian Railway tracks, which will increase the punctuality of the passenger trains on these sections.
The 353 km section between Khurja (Delhi-NCR) and Bhaupur (Kanpur) on the EDFC was inaugurated back in December 2020. The 303 km section between Rewari (Haryana) and Madar (Ajmer, Rajasthan) was opened in January 2021 by PM Modi. The 100 km section between Ganj khwaja (Near Mughalsarai, UP) and Sonnagar(Bihar) was opened to traffic in March 2021.
With the opening of the 356 km long Madar-Palanpur section of WDFC, a total of 1112 kms out of a total of 3300 kms of DFC tracks (34%) have become operational.
A total of Rs 7,020 crore was spent on the Madar-Palanpur section. All level crossings on this stretch have been eliminated, and most of them have been converted to underpasses and Rail over bridges, which will allow the freight trains to run at full speed of 100 km/hr , without the need to slow down before level crossings.
Fish plates on the tracks have been reduced and tracks have been welded to more than 40 km sections, to reduce Vibrations due to heavy loads of the trains.
The tracks of DFC can handle loads of 25 tonnes per axle, unlike that of IR (Indian Railways), which handles only 22 tonnes per axle. Due to which, a Goods train rake of 59 wagons can carry only 5000 Tonnes of load on IR tracks, whereas it can carry 6500 Tonnes of load on DFC tracks.
Automatic block signaling systems are used at blocks of 1 km to run trains on this route, which enable a higher number of trains to run between 2 stations, unlike that of IR, which uses blocks of 4 km. In case of normal signaling, just one train can run at a time between 2 stations in most stretches of IR.
The height of Overhead Electricity Wires (OHE) has been kept at 7.47 meters from ground level to facilitate operation of Double Stack container trains, unlike in IR tracks, where the height is kept at 5.6 meters.
This section contains 98 major bridges and viaduct, 531 minor bridges, 02 rail flyovers, 136 roads under bridges and 14 roads over bridges (04 completed and 10 under construction).
Both the EDFC and WDFC will be completed by December 2022 and will completely transform the economy of Northern, Western and Eastern India and will propel the economic prospects of our country to newer heights.
According to the studies, when the northern half of India gets more connectivity to seaports due to this project, the GDP growth of our country will increase to more than 10%, as export based industries situated in the interior part of our country will see lesser transport cost and more connectivity.